I’m currently working on making a lavalier microphone for use with my phone and gopro camera. I know these types of microphones are readily available and can be purchased fairly cheap, but where would be the fun in that? I’ve purchased lavalier mics in the past and dissected and realized that they connect the electret microphone straight to the trrs jack using the 2-3v supplied by the mobile device or camera to power the microphone. I’m trying to do the same but between the ECM and the TRRS I want to add a high pass filter. I attempted to try this on breadboard and there is no signal coming through with a high pass filter of 97 Hz. Using a 170 ohm resister and 10uf capacitor. I have done some research and I cannot find anything that pertains to my exact predicament.

Electret mic + to 10uf cap then to trrs but between the Cap and TRRS I put a 170 ohm resister to the ground wire.

The - side of mic I connected straight to ground on trrs with the 170 ohm resistor connecting to it.

Here is a horribly drawn illustration of how I wired the mic. 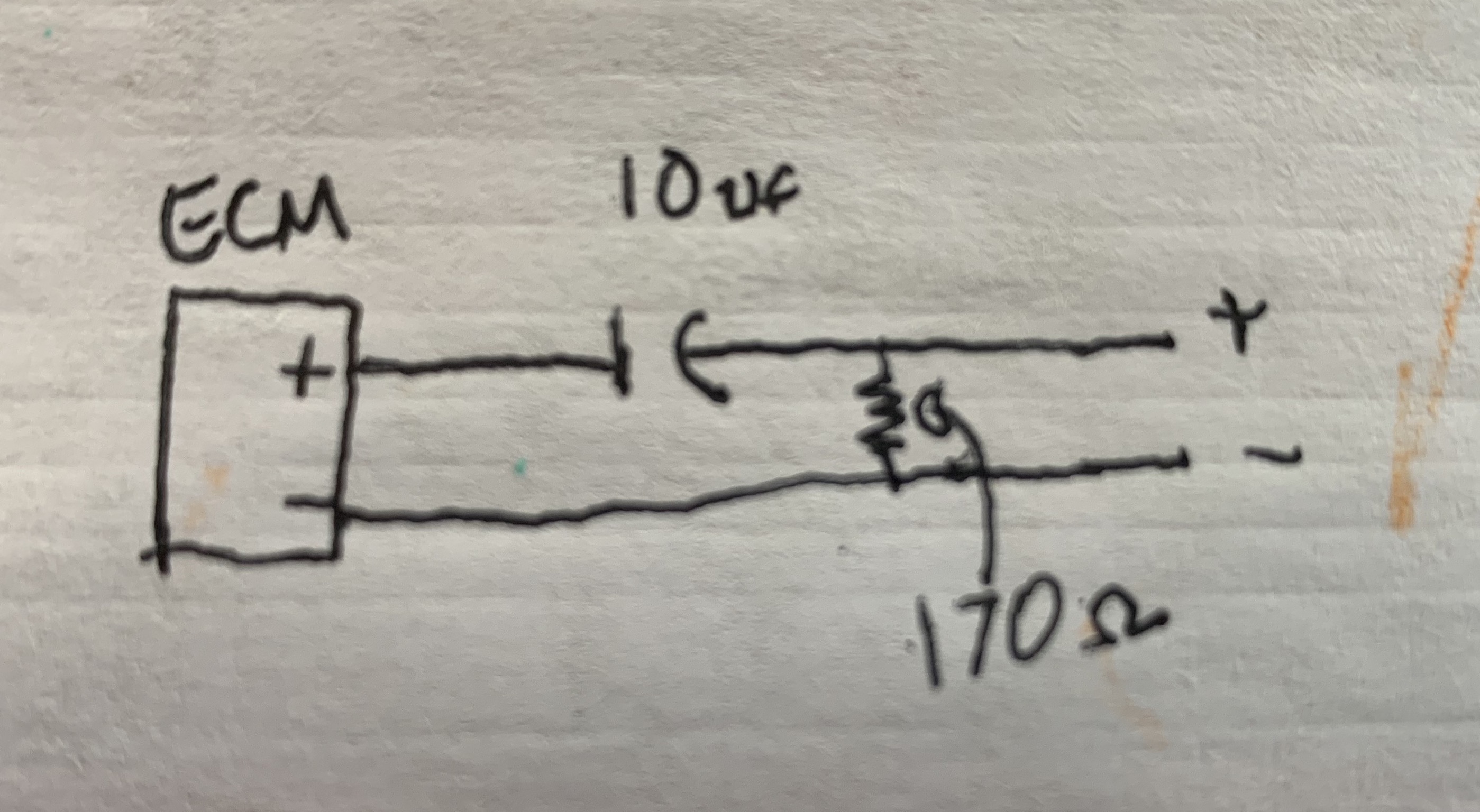 Guys take a look at this circuit now and see if it’s better. 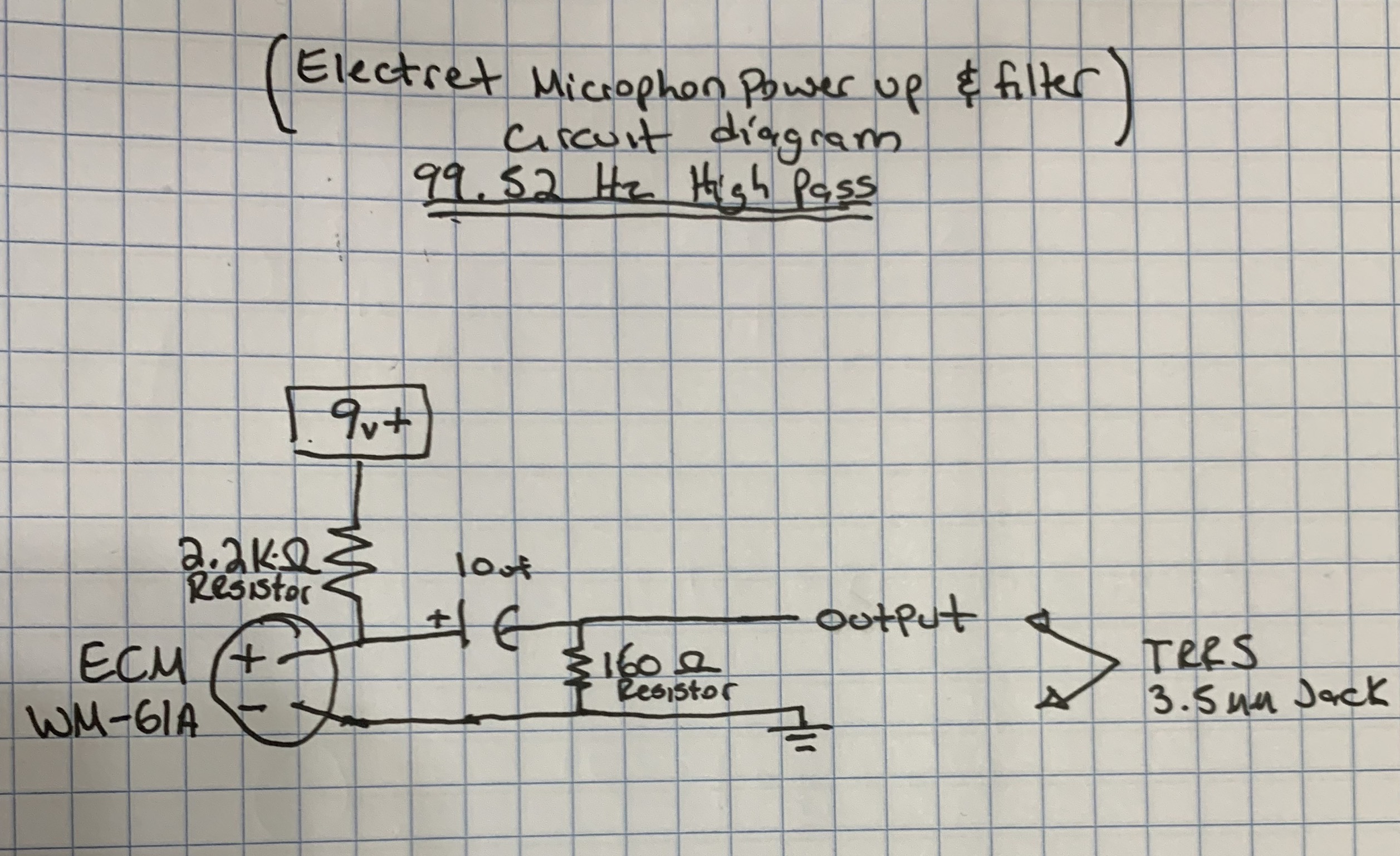 You cannot put a capacitor in series because it blocks the DC supply. Your resistor in addition pulls the DC onto its knees, because the typical resistor between mic+ input and system's supply voltage (3 or 5 volts) is 2...3 kOhm.

The only electrical circuit which works is a full filtering circuit which provides the needed supply voltage to your mic capsule. I bet you want something maximally as complex as your own attempt due the limited space and before all, due the wanted simplicity. I guess you want to avoid external battery.

If you can afford the inconvenience of a dedicated battery, the obvious solution is simple (assuming RC high-pass filtering is enough):

ADD: seemingly you have already figured this principle by yourself when this was under construction.

The voltage 3V is a guess. Your mic can be happy even with 1,5V and it can stand much more than 3V.

R1 is not a part of the filtering circuit. It's DC path to mic and it surely has some recommendations in mic's datasheet as the voltage. Too high resistance causes distortion. Too low resistance degrades the sensitivity but I'm sure it's not critical, maybe just opposite, you want to make it less sensitive, I guess. Even as low as 270 ohm can be good for this purpose. I would start with 2,7kOhm.

Some metal shielding can be needed against electrical disturbances like in mic cables. Connect it to the minus pole of the camera mic input.

Alternatively you can do it acoustically. Put the capsule inside a rigid small bottle with thick walls. Let the bottle have small hole near the sensitive end of the capsule. If the mic is near enough user's mouth, it can still get enough sound.

Another idea is to punch a hole which lets the sound enter to the back side of the membrane of the mic. When user's mouth is remarkably closer the front side than the hole, the mic can well still produce enough signal. Here's the common mic capsule opened:

Finally the ultimate solution: Try a dynamic mic. It needs no DC supply. A half of in-ear headphones goes well. You need only a series capacitor to get the highpass filtering, you already have the electret mic supply circuit as the resistor. Try series capacitor = 0,47uF at first.

A general note for all mic types: You must have some soft material which is sparse enough to let the sound go through, but prevents all wind turbulence near the mic. You need some space between the mic and this windshield. 1cm, even less can be enough.

Because electret microphones need bias voltage, they are hooked up (generally) like this: 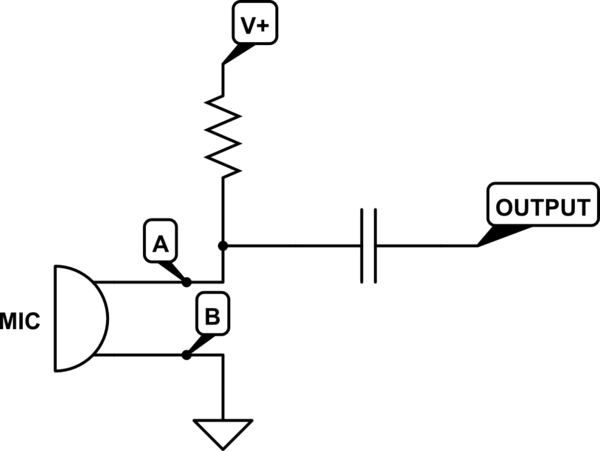 If you have access to the part of the schematic labeled 'OUTPUT' or the capacitor you can add a high-pass or change the properties of the existing high-pass. If you only have access to nodes A and B, you are going to have a hard time. This will require a much more sophisticated circuit and most likely a second power source.

Why do you need a highpass filter? The phone and camera probably already have it. Simply plugin your electret mic and use it.

Not the answer you're looking for? Browse other questions tagged filter microphone high-pass-filter electret or ask your own question.