Questions about grounding points for an analog signal transmission

I'm planning to implement the following circuit I have drawn. But because there is no SPICE for such components I couldn't verify or test any overall workings. 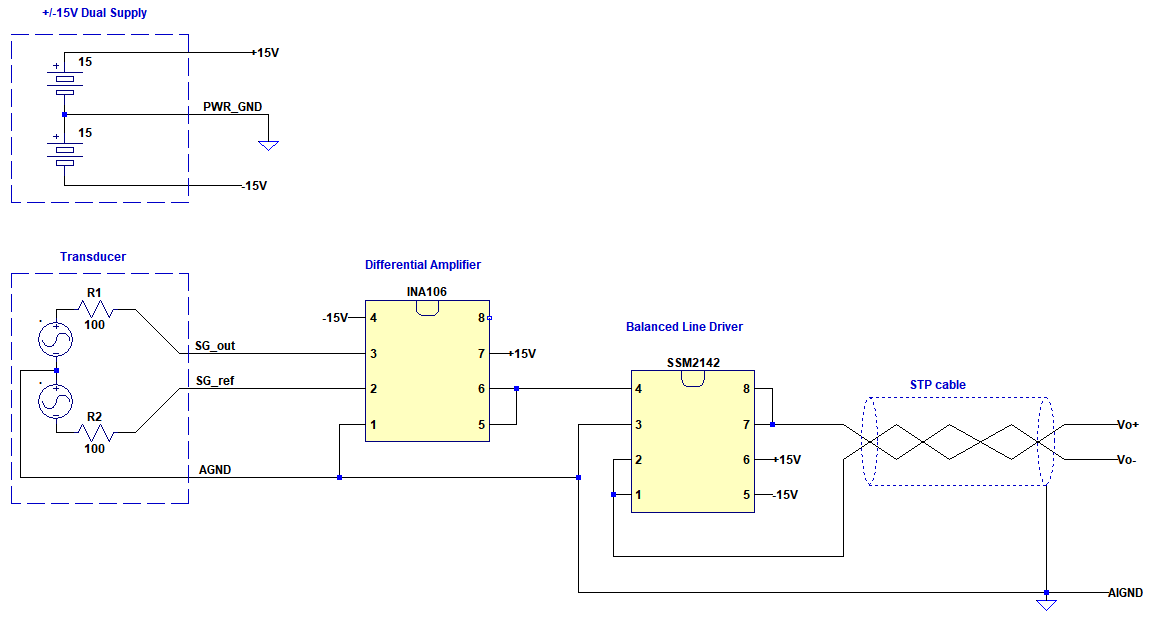 From left to right I will first summarize the signal chain.

The transducer is a uni-polar but balanced transducer and it has three terminals marked as SG_out, SG_ref and AGND. It has normally swing of +/-200mV. I want to amplify this transducer signal and send to a 20 meters far away data acquisition input in a balanced way. Signal interest range can vary between +/-100mV to +/-10V and freq from DC up to 30kHz.

The fixed gain differential amplifier INA106 is chosen for a stable gain and CMRR for temperature changes.

Balanced line driver is right after the differential amplifier is chosen to ensure the balanced output for the transmission.

STP cable carries line driver's outputs all the way to a differential ended and balanced data acquisition inputs. The STP cable's shiled is grounded to the ground of the data acquisition ground AIGND.

The data acquisition receives the signals Vo+, Vo- from the STP cable.

If the over all wiring is correct, my questions are:

1-) As you see the STP cable carries Vo+, Vo- and shield but not the analog ground of the incoming signal chain. Does that mean I should ground the balanced driver's ground(from its pin3) with a separate wire to the AIGND as drawn in the schematic?

2-) At what point of the signal chain ground(from AGND to AIGND) is better to connect and ground the power ground terminal PWR_GND? 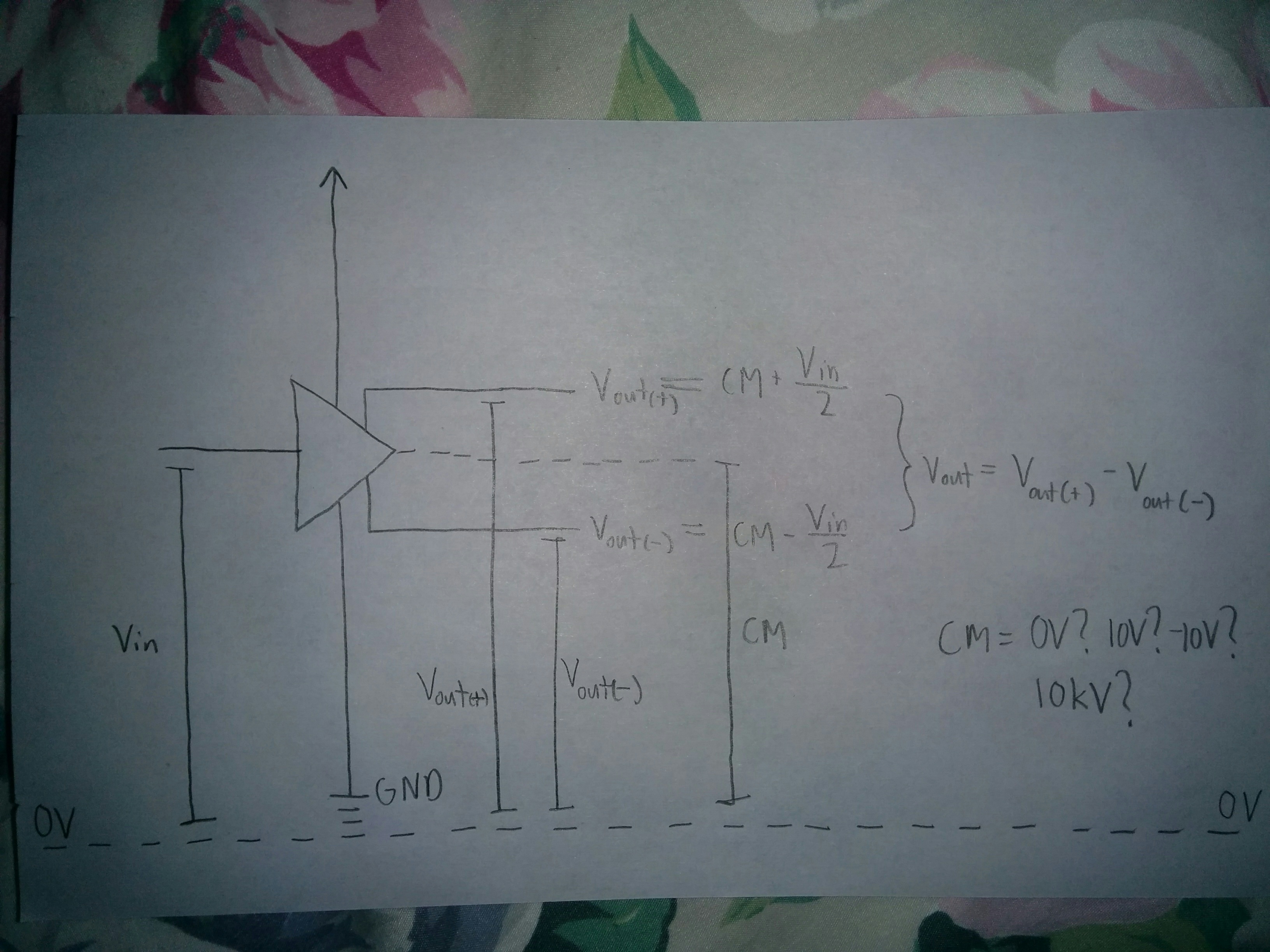 In the picture above, the output is interpreted by the receiver as the difference between the two signals of the differential pair. But those signals still have an absolute voltage relative to ground. Obviously both the transmitter and receiver can only tolerate so much absolute voltage. So what is the common mode voltage between them? I dunno. So you should run the ground of the transmitter to the receiver along with the twisted pair to at least give some common base reference voltage that the transmitter and receiver can share. This stop the common mode voltage from straying too far.

It also gives a path for the return currents being sent from the transmitter to get back to the transmitter which reduces noise (the current will find its way back and if you make it a long or difficult path the return current will raise hell). If distances are long enough, the ground line will be at different voltages at each end but keeping transmitter and receiver linked still allows a mechanism for charge to balance out between each transmitter GND and receiver GND so it stops them from straying too far.

For very long runs this still might not be enough to keep the common mode voltage within tolerable levels since the equipment on each end is ultimately grounded to the earth and the mere fact that there is a large distance between the two earthing points means there is a large voltage difference between the two. At that point you need galvanically isolated transmitters and receivers that allow no currents to flow between transmitter and receiver and allow the voltage in the balanced line to float relative to the transmitter and receiver. This lets it tolerate much, much higher common mode voltages. Only digital signals are transmitted this far though but all the same rules apply. 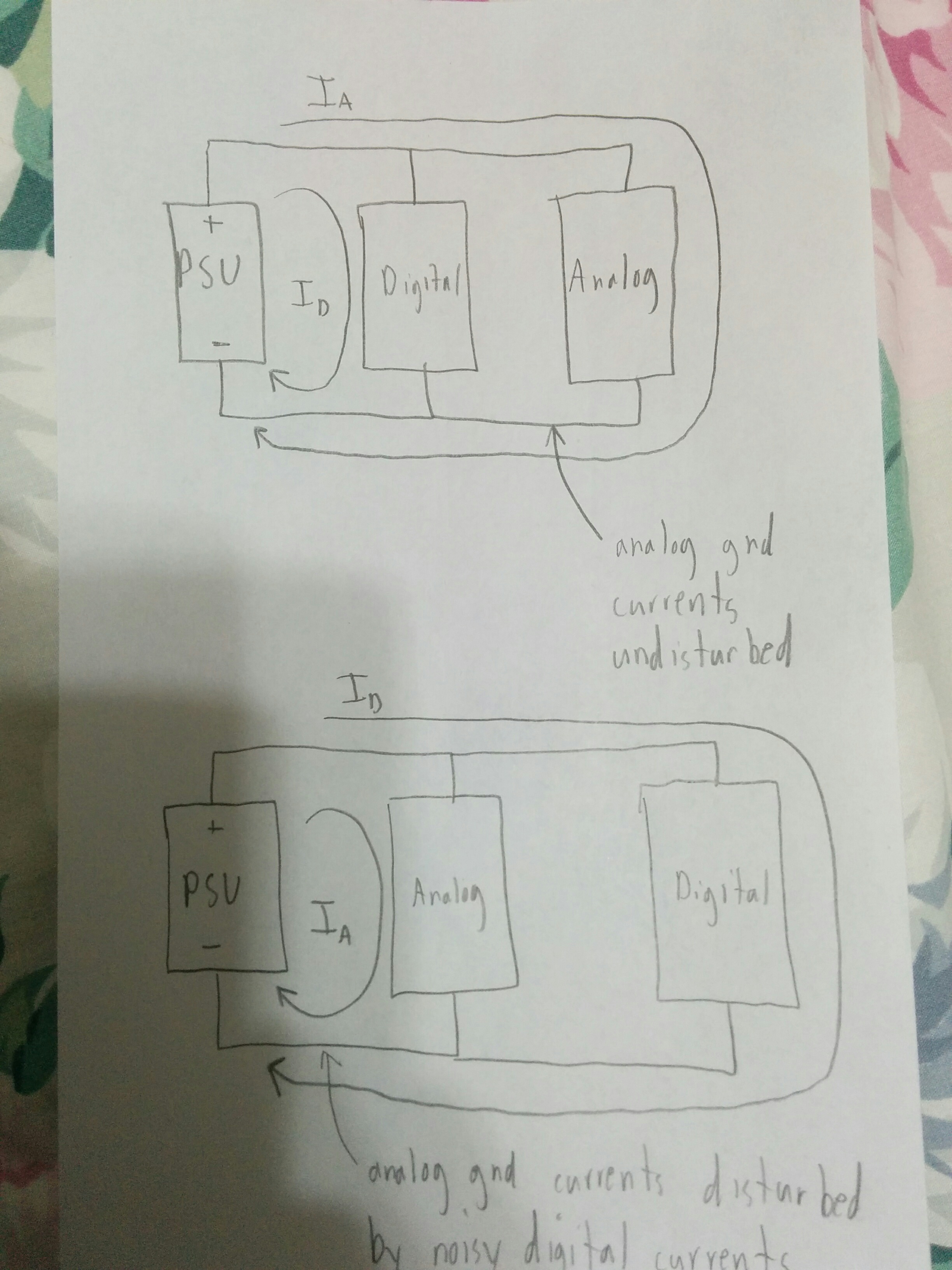 You should also connect all grounds together, but connect it such that digital currents do not circulate in the same ground paths that the analog ground currents circulate.

Which reminds me, you need decoupling capacitors in your circuit. Capacitors are short circuits for high frequencies so this gives high frequency currents an even smaller loop to circulate in which reduces noise and makes things more stable. Without them, the high frequency currents have to circulate all the way back to the power supply which makes an enormous loop which radiates noise and causes high frequency voltage dips due to the long wire inductances. The large loop means more inductance which means more voltage dips whenever the component tries to draw a burst of current. The larger loop also makes for a more effective EMI radiator (an antenna).

A rule of thumb is to use a 0.1uF ceramic capacitor between the power and ground pin of every IC as close to it as possible. 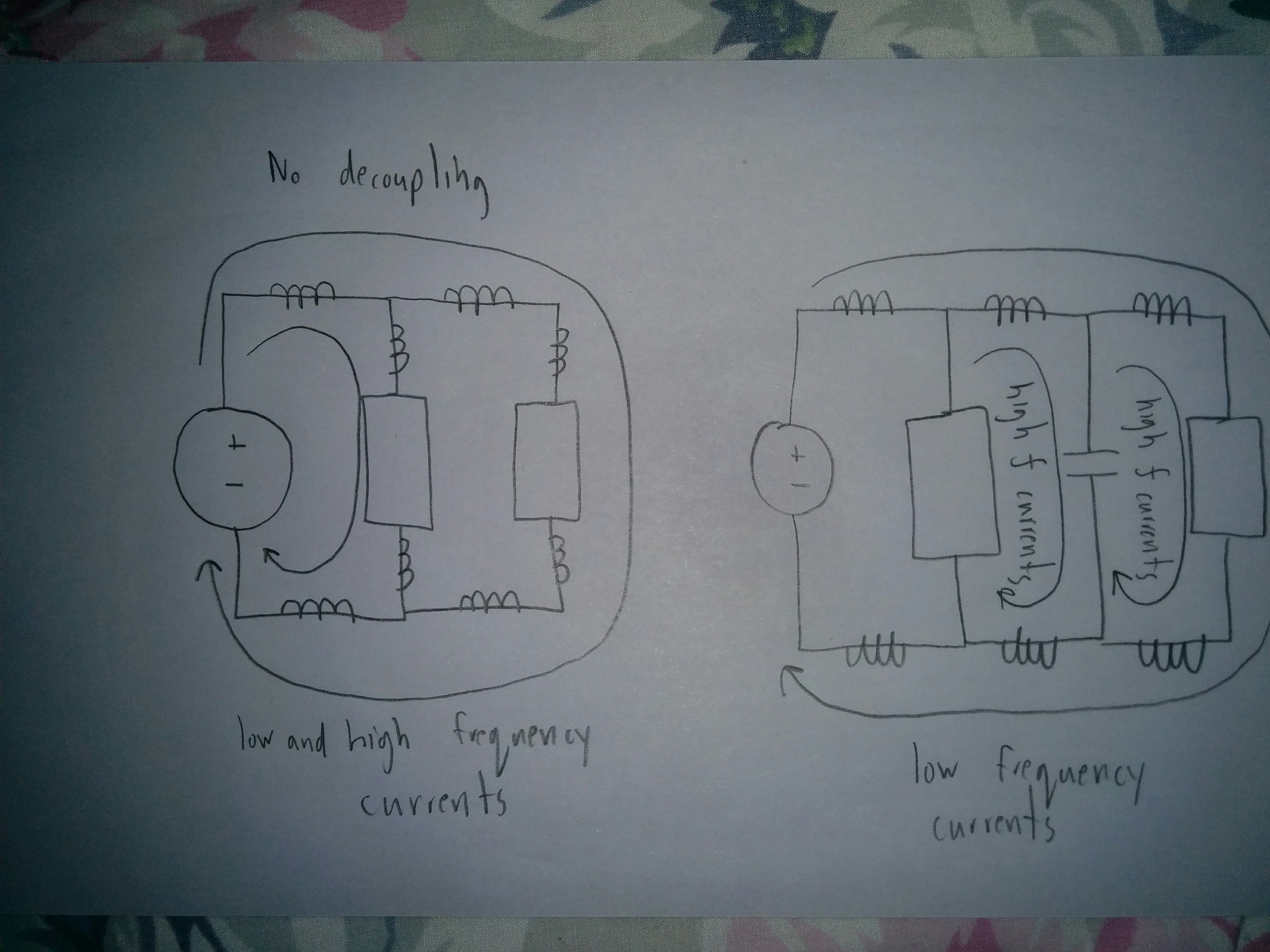 Basically, current need a return path. If you make the path long or difficult bad things happen. That's what all of this boils down to.

All the above examples used a daisy-chained ground, but there is also such thing as a star-ground to let you get around such problems. Remember that wire and copper connections are parasitic inductances. 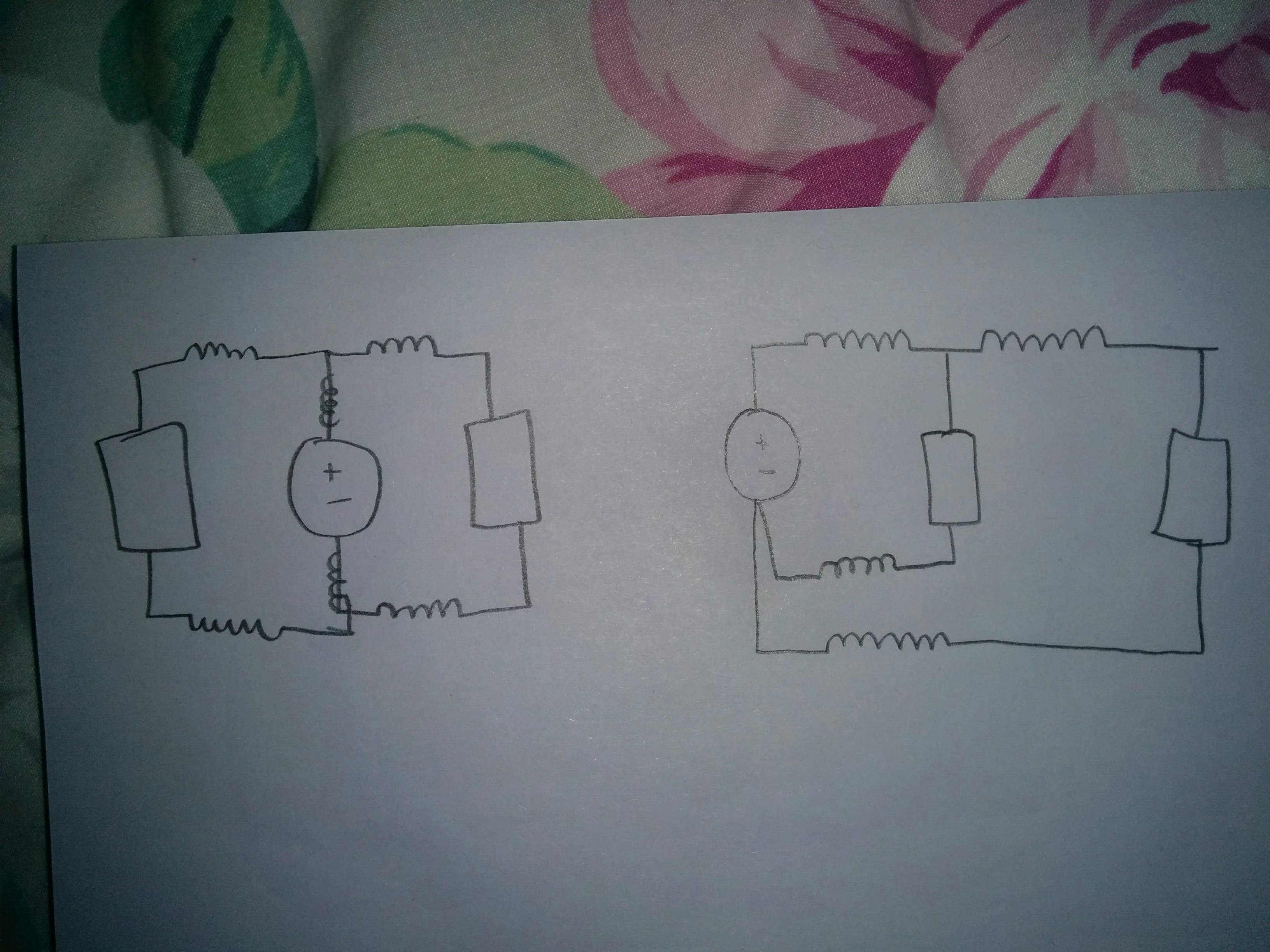 Not the answer you're looking for? Browse other questions tagged analog ground instrumentation or ask your own question.

1
How to achieve common ground for a single ended input?
0
Confusion about the use of AIGND in a differential amplifier
0
A question about common mode voltage protection of a device
0
Is this loop problematic for the analog readings?
0
Questions about earth grounding enclosures
2
Shield grounding for analog sensor
1
Using a fully differential amplifier as a differential ADC driver
2
Pi Filter Grounding for RF sampling ADC
0
When using mA on analog devices, does the other wire go to 0V or Earth?