I am doing a project to record and log the voltages of an 8 cell lithium battery. The project is based on an STM32 microcontroller, and logging is done on an SD card. I have made the first version of the PCB, and have spent a lot of time testing the board, including tuning the digital filter.

Everything was working correctly, until I moved on to calibrating the RTC. I have discovered that it is out of spec by 200ppm. This measurement was made by using the calibration output on the micro controller. Using a logic analyzer, I can see the output frequency varies between 499 and 524Hz, when it should be 512Hz. Is this indicating some type of interference?

On closer examination, I can hear the crystal audibly whining when I put my ear close to it. As the input voltage changes (the design range is from 4.5V to 32V), the whine changes too. Also, when I am connected to the board using USB, the whine changes again to a different type.

I use a MAX15062A buck converter in PFM mode to power all active components on the PCB. The current draw from this buck converter is about 20mA (measured). I think that the output noise from this SMPS is what is causing my problem with the RTC, and the crystal whining.

So leading on from this, could people please help me verify what the cause of my problem is and how I may solve it? I was thinking I would need an LC/RC filter, or some ferrite bead just after the output of the buck converter?

The output voltage frequency of this buck converter is about 10kHz in the mode I am using it (PFM) and the current draw of my application. The voltage ripple 3.32V and 3.39V (according to the Maxim simulation). I see a stable output voltage of 3.35V on my multimeter. 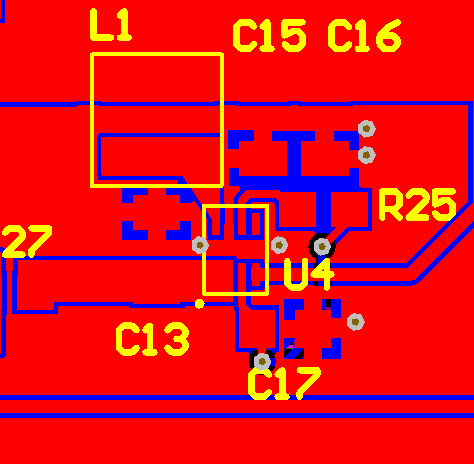 Edit: Pin 7 of MAX15062 unconnected to force PFM mode in low loads (like my application. From datasheet: 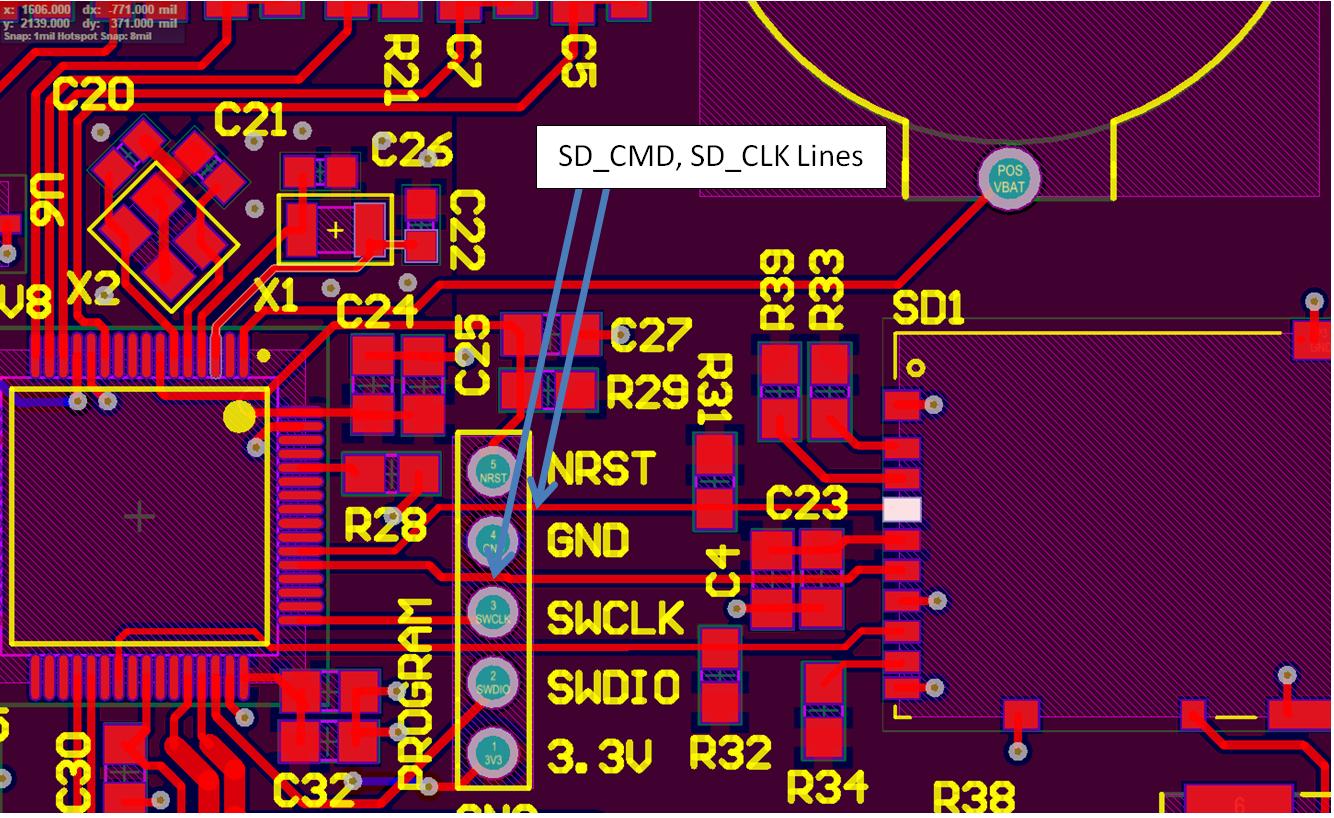 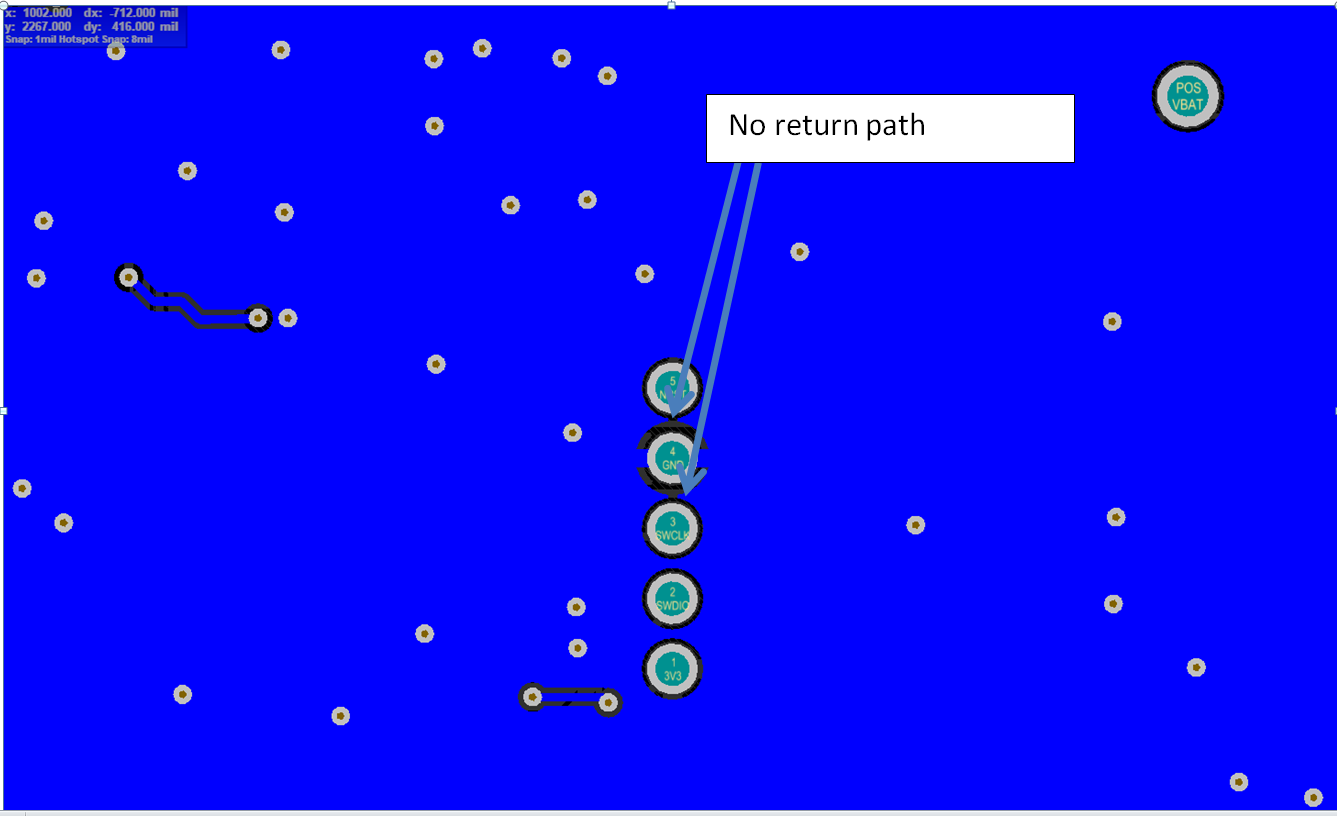 I think you mixed up pin 5 and 7. Pin 5 (right upper corner of the IC in your PCB layout) select modes, pin 7 is GND which is obviously needed :)
I would suggest connecting pin 7 to the upper (w.r.t your layout) terminal of C13, but am missing that connection as well. Or is it a via within the pad?

I have had this problem and it was caused by the switching noise from the converter. The crystal oscillator is an analog circuit with your crystal in the feedback loop, so if there are noise spikes of sufficeint amlitude the oscillator can either miss or add extra pulses, throwing off the frequency. Here are things to try. Make sure that there is no current path under the oscillator section running to your converter (power) or returning through the ground plane. Tying your crystal load capacitors (C21 and C22) to a ground plane is not always the best approach; instead, try providing a separate path back to the processor ground. Keep the crystal and capacitors clear of the ground plane if there is a current path. Also, the fact that you can hear the converter at 8 Khz means that in PFM mode you are "skipping" two out of three buck pulses. You have sized the converter's inductor for larger loads than you are running. In PFM mode, the current spike is always the same high amplitude that would be needed for maximum load; in other words, you are getting a current spike three times larger than it needs to be one-third of the time. If you don't need the headroom for higher power, try changing the buck components for lower power. Finally, check the value of the crystal load capacitors. Remember that the capacitors are in series as far as the crystal is concerned, so you need two capacitors, each about twice the value of the crystal's specified load capacitor.

On closer examination, I can hear the crystal audibly whining when I put my ear close to it. As the input voltage changes (the design range is from 4.5V to 32V), the whine changes too.

From the datasheet figure "SWITCHING WAVEFORMS (PFM MODE)" the burst of pulses is every 40 us, so at 25kHz. At lighter loads (than 20mA) the time between the burst becomes larger, so the frequency lower. The time also changes with input voltage (which you were describing).

This bursting inductor current causes the inductor to 'tremble', so that's what you're hearing. (Like @EugeneSh. was already suggesting).

I am not sure if the burst go as low as 8 kHz. But maybe you hear 16kHz and it sounds like 8kHz? I have trouble when comparing tones whether i hear 8kHz or an octave higher: 16kHz.

Anyway: this doesn't solve your issue regarding the RTC

Not the answer you're looking for? Browse other questions tagged switch-mode-power-supply filter noise crystal rtc or ask your own question.