I built a transistor-based astable multivibrator circuit and then fed its output to an op amp buffer amplifier which then drove an 8 ohm speaker. Here is an image of the circuit schematic: 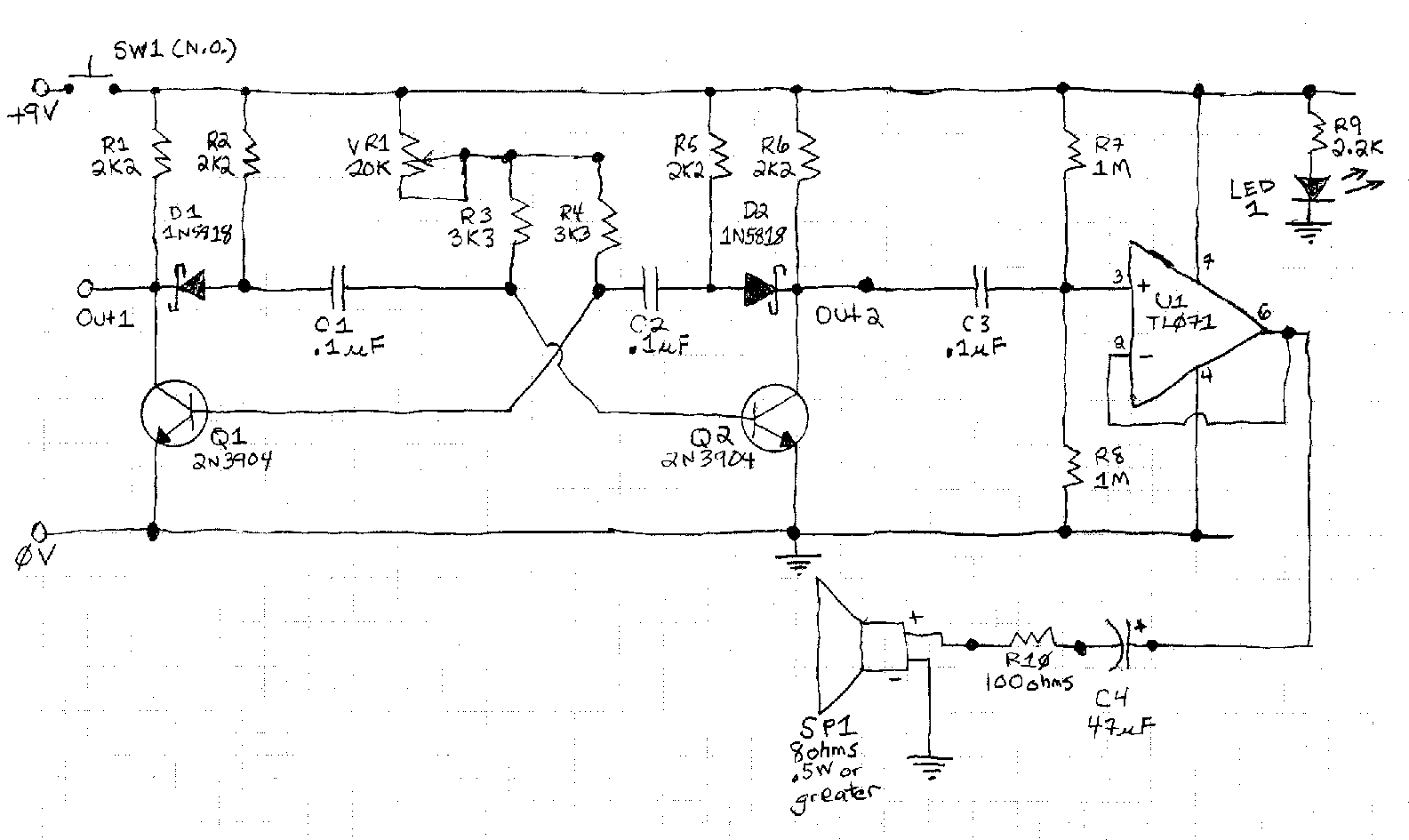 The circuit I based my astable multivibrator on was discussed in this post to StackExchange:

Anyway, here is the deal. As a user pointed out in the other post, with the diodes in the circuit (the original circuit schematic used 1N4148 small signal diodes), sometimes the circuit does not start oscillating when you apply power to the circuit.

On a whim, I replaced the two 1N4148 diodes with two 1N5818 Schottky diodes. Voila! The circuit started up and oscillated just fine! The edges of the square wave were much more vertical. I was happy.

Here is what I do not understand: Why would it matter whether the diode used in the circuit is a 1N4148 or a 1N5818 (Schottky) type diode? I know the forward voltage of the Schottky diode is lower, but I could not figure out how that would matter.

From what I can tell, all the diode does is force the capacitor in question to charge up through the new resistor (R2 and R5 in my schematic). Why would it matter whether the diode I use is a Schottky type with a low forward voltage, or a regular small signal diode with a larger forward voltage?

I am sorry if this is a newbie sort of question! Thank you in advance for your mercy.

By the way, the circuit works great. But I hate not knowing WHY.

I built experiment circuits using the helpful guidance from the commenters and answerers. Much gratitude!

What I ended up with is this circuit: 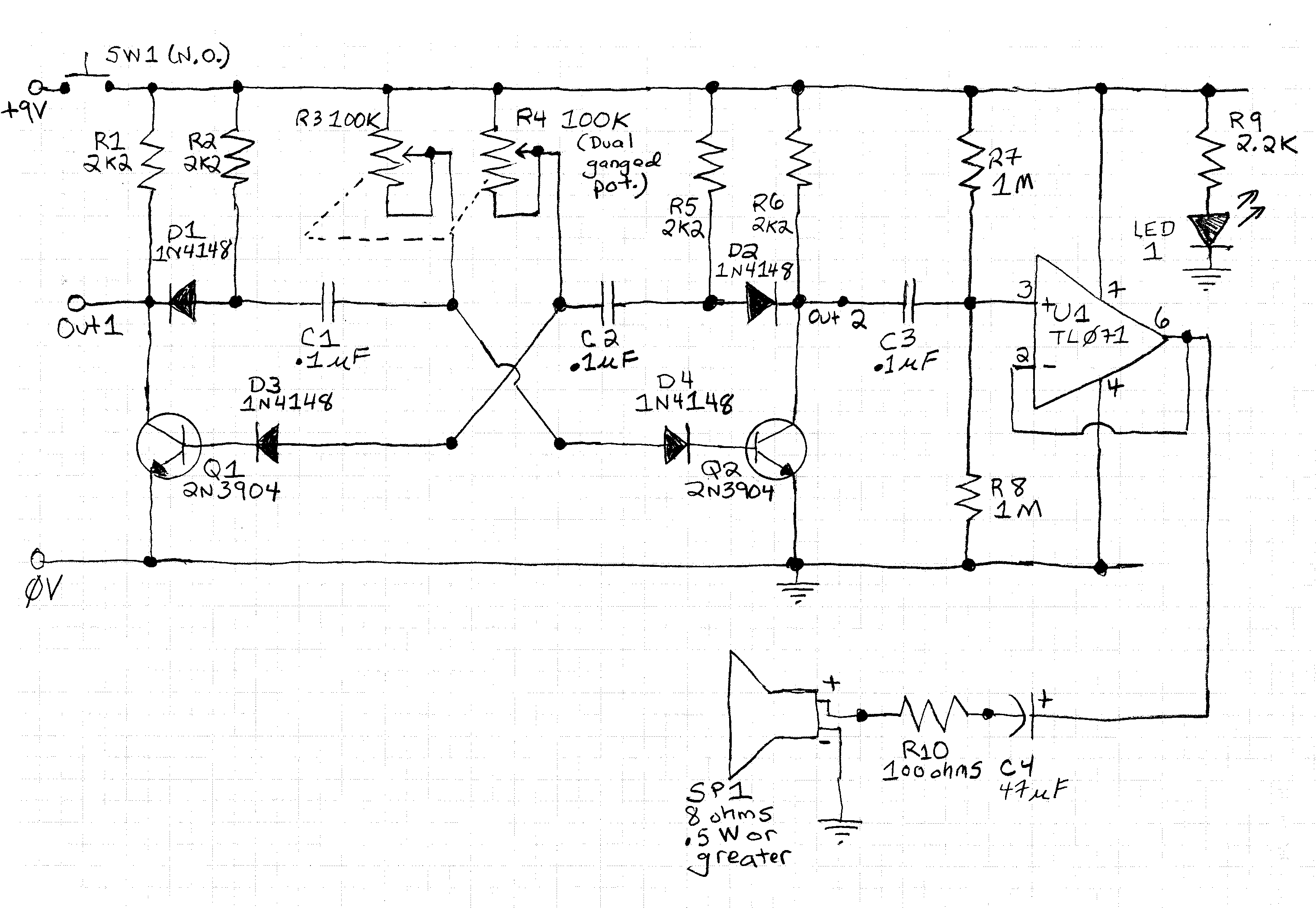 The solution I ended up with was in a magazine article by Ray Marston. Here is the link to Ray Marston's magazine article: "Bipolar Transistor Cookbook - Part 6". See https://www.nutsvolts.com/magazine/article/bipolar_transistor_cookbook_part_6 for the article. See figure 2.

That is what I did. Now the base-emitter junction of each transistor is protected from zenering due to any reverse voltage up to -100 volts.

What I discovered, quite by accident, is that adding a diode in series with the base of each transistor solved the "circuit won't start oscillating when power is applied" problem. I am still analyzing the circuit to figure out why this is the case. Any answers to why the diode on the base of each transistor solves the "won't start oscillating on power up" problem are appreciated.

Ray also has a proposed solution to the "circuit won't start oscillating on power up" problem in his article. See Figure 6. I have not yet tried his solution in a test circuit.

Another change I made to the circuit: I replaced the single, 20K ohms potentiometer with a dual, ganged pot, for the RC circuit. The dual, ganged pot is in the circuit to allow the frequency output of the oscillator to be varied within a certain range. For circuits that only need one frequency to be produced, the pot could be replaced with two fixed resistors. Unfortunately, the only dual, ganged pot I had handy was a 100K ohms, dual, ganged pot, which I know, per one of the helpful answers, is too large a value when compared to the 2.2K ohms resistor connected to the collector of each transistor. I will have to be careful not to set the pot to too large of a value.

If I can figure out WHY adding a diode in series with the base of each transistor solves the "won't start oscillating on power up" problem, I will post that answer here.

It occurs to me, after studying the schematic, that I should put a fixed resistor of at least 2.2K ohms in series with each side of the 100K pot. That way, if the pot is rotated to its minimum value, there will still be SOME significant resistance for each of the two RC networks in the circuit.

Here is the newest version of this circuit as built on my breadboard: 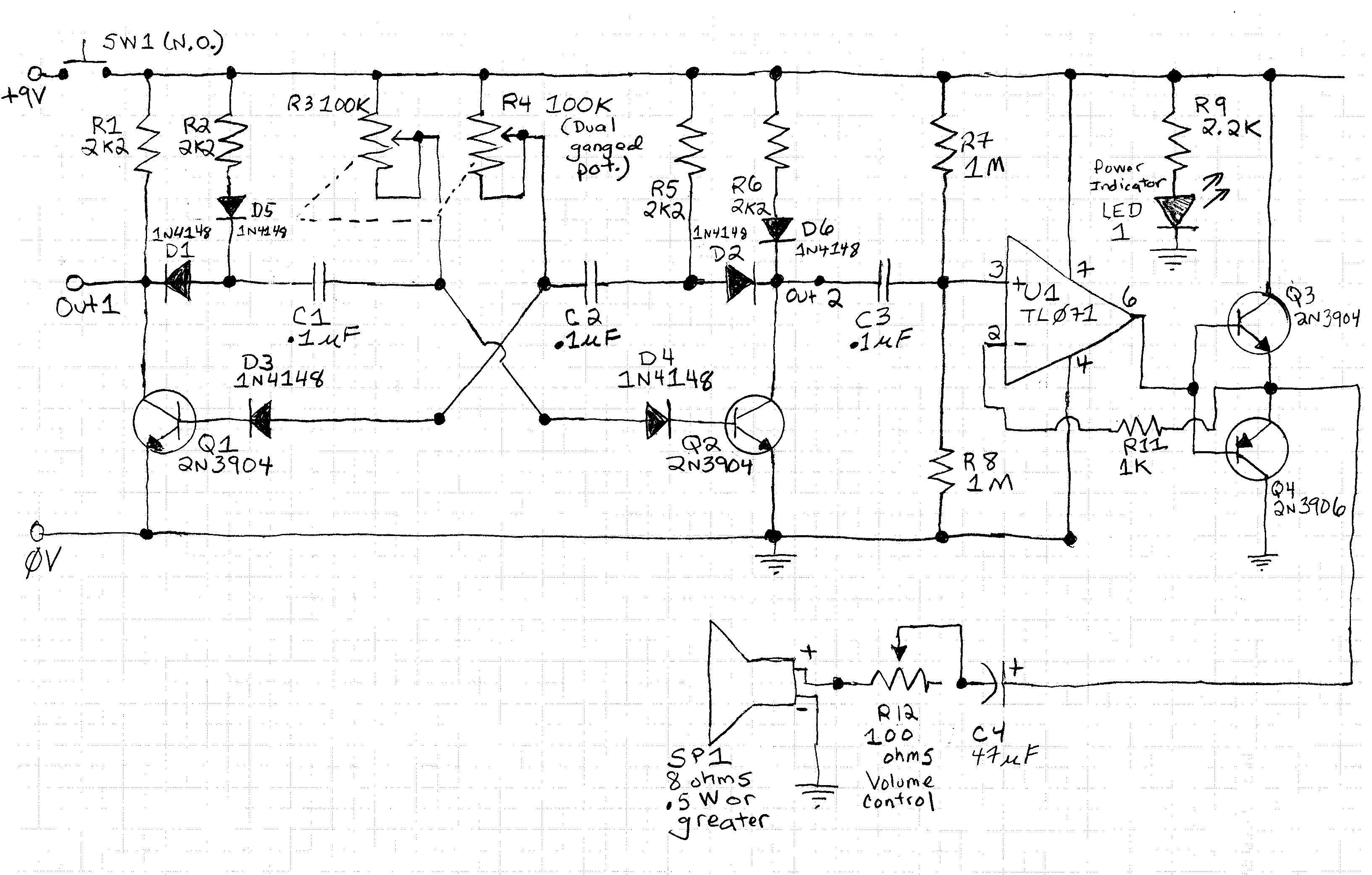 I added two new diodes (D5 and D6). These seem to have little practical effect on the circuit.

What did have an effect on the circuit was adding the two output transistors in an emitter follower "push pull" configuration. I did this at the suggestion of an answerer.

These two transistors allow the circuit to send a lot more current to the speaker as I can reduce the final variable resistor and hump about 180 mA of current (max) to the speaker.

The problem is that, when I do send a lot of current to the speaker, the op amp starts to draw about its maximum current on pin 7 - about 2.5 mA.

I tried using a 1K resistor on the output pin (6), but that also reduced the speaker output a little.

Any advice on how to crank the current to the speaker while protecting the op amp?

After reviewing the schematic drawing I posted on March 1, 2019, I realized that diode D6 was in the wrong place. It was connected to R6 and the cathode of D2. It should have been connected to R5 and the anode of D2. The schematic has been corrected and is posted below: 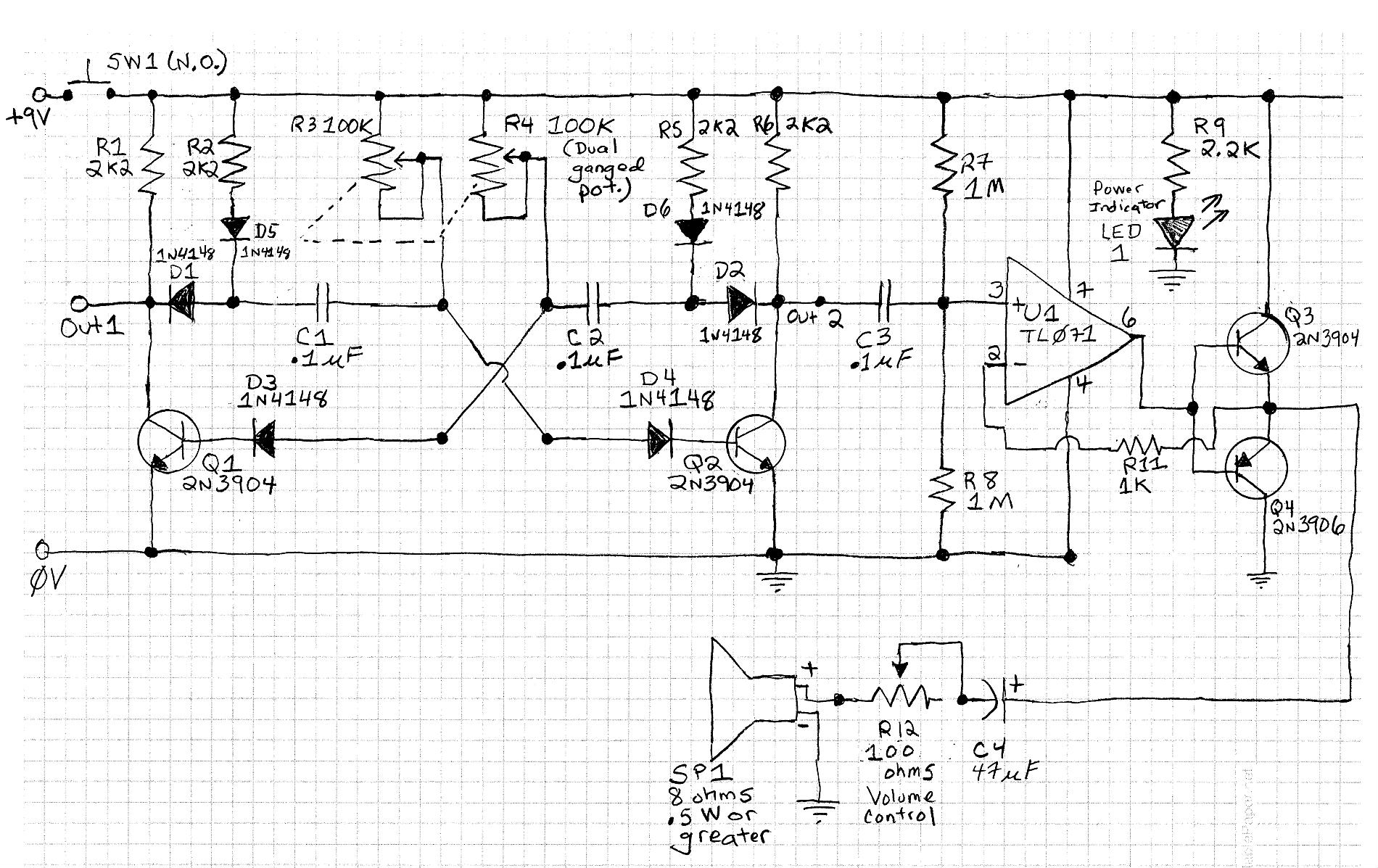 The design has a few problems illustrated in marked up schematic.

1) hFE is only 10% when saturated. so Rb/Rc' should not exceed 20:1
2) Vbe goes negative below -5V which exceeds Absolute Max rating. (on most transistors) -6V in this case. meanwhile 9Vdc can produce ~>-7V pulse to base.

The Schottky fix is a bandaid because it overdrives the Vbe in reverse below the typical limit of -5V "Abs. Max rating"

Since this reduces the ramp -ve peak from -7V to -0.7V it also raises the frequency towards 2x. and not the 10x you would expect because the rise time starts linear then rapidly rises exponentially due to large of pulse current on cap fixed by the reverse diode load. 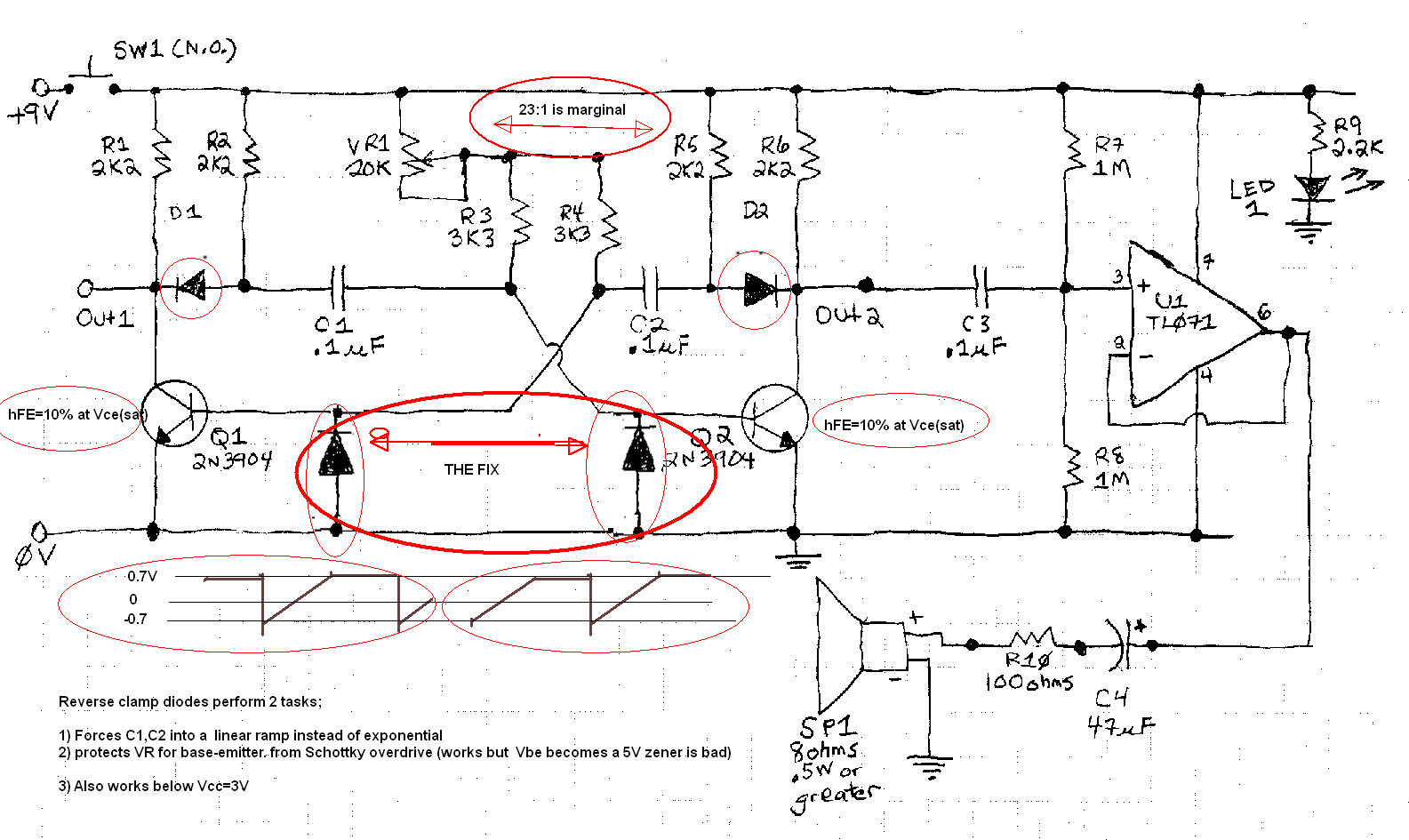 If you search me for Astable CMOS Schmitt trigger, you may find a much more reliable low power design then use the transistors on the Op Amp output as complementary emitter followers for more power.

The other thing the diode does is increase the apparent transistor saturation voltage as seen by the other transistor's base. You can recalculate the waveforms on both sides of C2 with diodes of 0.2 V and 0.7 V and see the effect.

You may have several problems going on here. By their nature multivibrator circuits tend to NOT oscillate if both sides are somewhat balanced in transistor beta, temperature, and resistor 'true' values. Also it helps to have a fast rising supply voltage so slight differences in capacitive values can start the oscillator.

2
Design of a discrete BJT current buffer for low-current op amp
0
When does the capacitor charges and discharges in an astable multivibrator circuit?
0
Using CD4093 as Schmitt trigger oscillator. How to measure high and low trigger thresholds?
2
Astable multivibrator diode improvement

14
Protecting NPN transistor from negative base-emitter voltage?
2
Diode transistor circuit logic
11
Can I (ab)use a transistor as an ESD protection diode?
53
Why does music synthesizer built from chain of astable multivibrator circuits get "out-of-tune" after a few hours?
0
Diode selection for step-down Converter
0
Voltage drop across junctions in a bjt transistor
0
Input impedances in CB and CE transistor circuits
12
Understanding a tachometer signal conditioning circuit I inherited