Here is a link to the datasheet: https://www.analog.com/media/en/technical-documentation/data-sheets/ad797.pdf

And a picture of an example application: 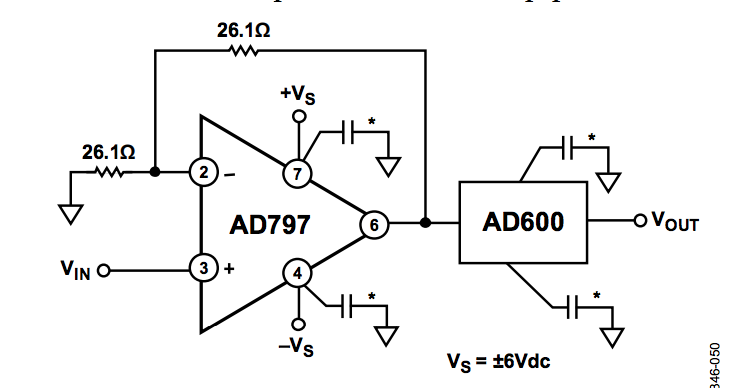 26.1 ohms seems like far too small a value for feedback resistors.

This op-amp boasts input noise of 0.9 nV/√Hz, which is roughly equal to the Johnson noise of a 50 Ω resistor. If you aren't putting resistors smaller than that around it, you're wasting some of this op-amp's performance, and probably should be buying something cheaper.

Another useful identity is 1 kΩ ≈ 4 nV/√Hz, there being many more op-amps with input noise around that level.

If you refer to figure 34, the total noise (assumed to be the white noise region for both en and in) is approximately 8x better at 10 ohms source resistance compared to 1K. 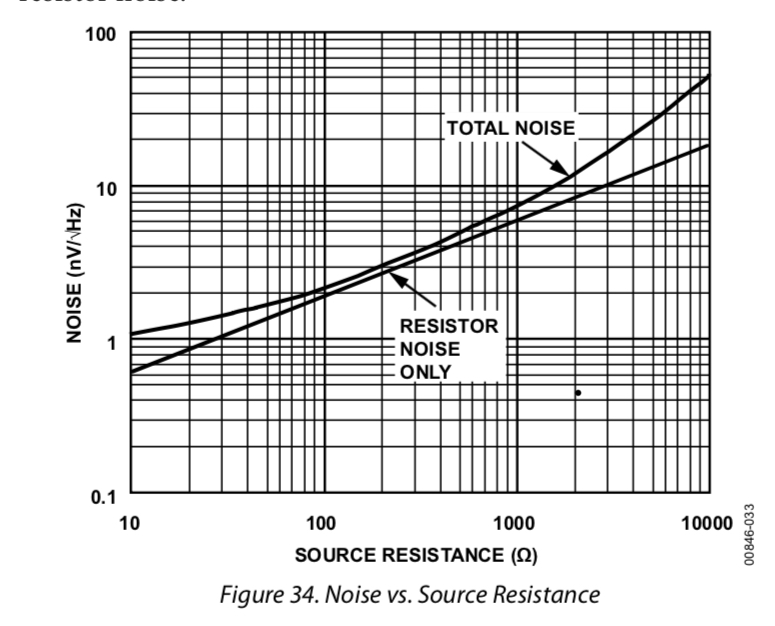 Remember that it’s not only the noise voltage and the Johnson-Nyquist noise from the feedback resistors but the input noise current multiplied by the resistance seen looking out from the inverting input.

The transistors at the input are run at very high currents so the voltage noise is quite low, but there is a cost in current noise.

They all add in quadrature, of course, since they are typically uncorrelated.

The resistors as shown are tolerable for smallish output swings and if you don’t care too much about accuracy of gain.

This is a good question and an example of a design trade-off.

What would the RTO (referred to the output) noise be if the two resistors of the feedback network were 1 kohm? It would be about 5.6nV/rtHz and dominated by those resistors.

Think about what would happen if you made the 26.1 ohm resistors from the data sheet into 2.6 ohm or 261 ohm resistors? What effects does that have on the circuit? At 2.6 ohm, your distortion would be worse, as well as your signal swing, while your noise would be fractions of a dB better. At 261 ohm, your distortion would be better, possibly your swing (depends on supply, see fig 5), but your noise would be worse.

I didn't see this as a component in my LTSpice version, but this would be an interesting simulation exercise. Or if you had a full lab, breadboard it and measure noise figure and distortion for the two cases.

With honor to Walt Jung (of ADI, et al), low values of resistors can cause detectable THERMAL distortion. Drive the opamp with 20Hz and 2,000Hz; use a spectrum analyzer, and you'll see the 2,000Hz output with some 20Hz sidebands.

Which means what? Use physically larger resistors. Or experiment with resistors having different resistive element structures? The very thin metal-file-spiral-trimmed has a very fast timeconstant for heating/cooling, as heat is dumped into the ceramic/clay core.

For example, here is circuit with 1nanoVolt/rtHz opamp, and 26 ohm resistors; the input is 100 microVolts PeakPeak; notice the very wide bandwidth (out past 10MHz) causes a poor Signal-Noise-Ratio. With such a small input, the Transient Thermal Distortion is only 1.9 nanoVolt. Wonder what happens for larger input voltages, using the same resistors? 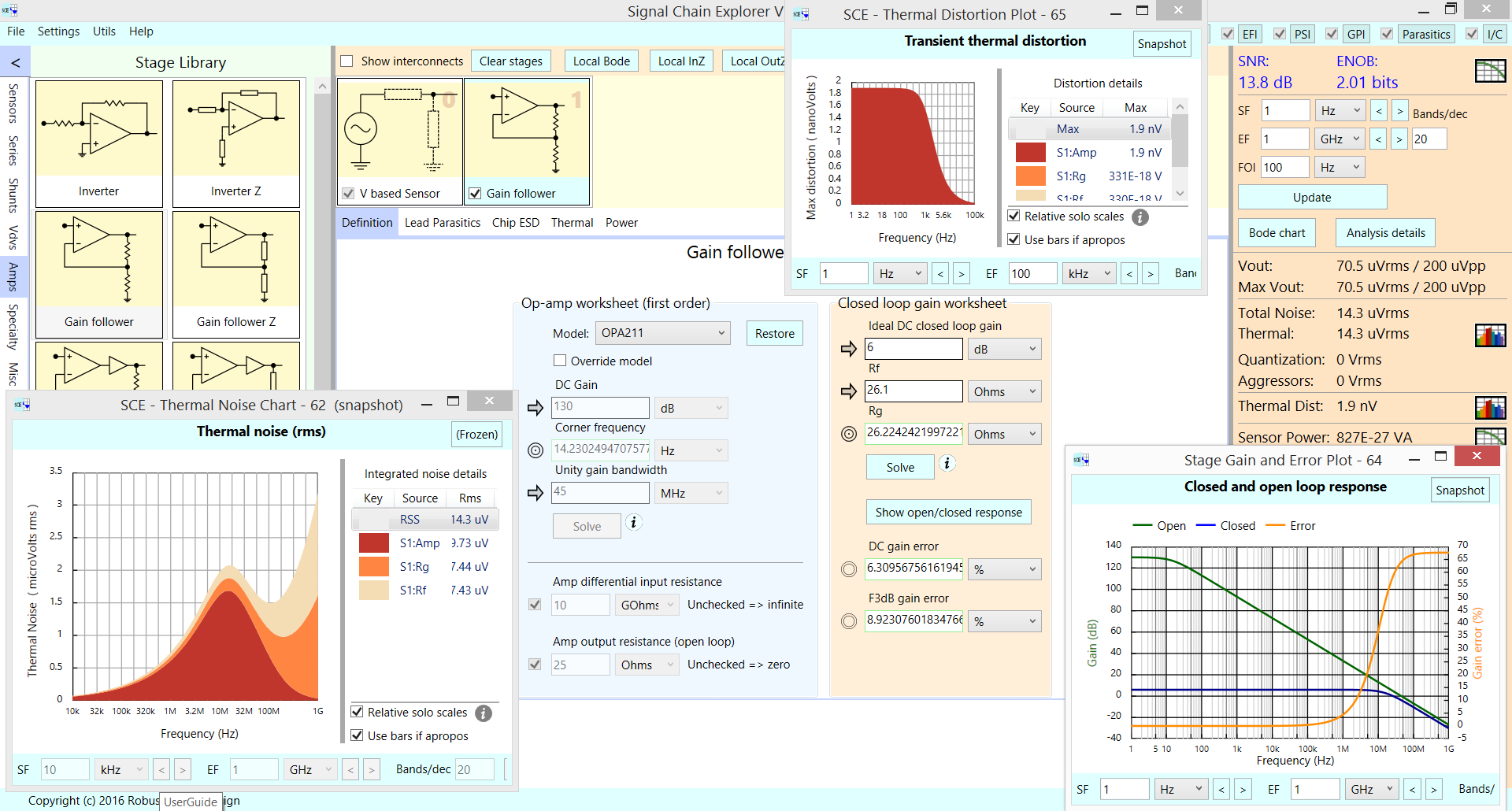 Here is what happened for 10X larger input: 1,000 microVolts PeakPeak. The first two stage Resistors are unchanged; we get lots of thermal Distortion ( 110 microVolts). To avoid overdriving the ADC, the 3rd gain stage now only provides 20dB gain. 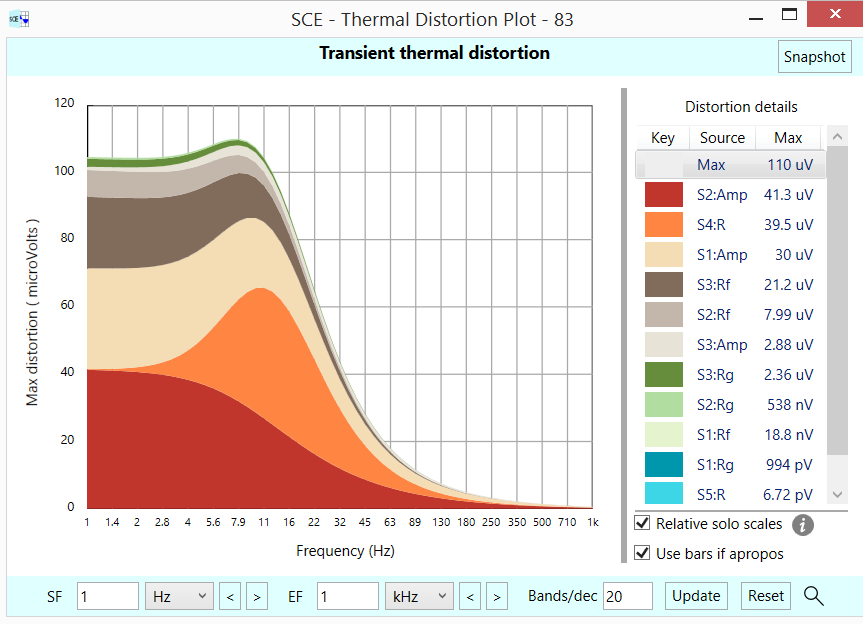 What are the resistor values?

Again, the thermal distortion with 100uVPP input was 1.9 nanoVolts. Yet with 1,000uVPP, that distortion soared to 110 microVolts.

Separate topic: the adi opamp has only 70dB PSRR at 10KHz. 70dB is 3,000:1. So what? Will a thermally-noise VDD-regulator be a problem? Some LDOs have internal equivalent Rnoise of 10,000,000 ohms (Often in poly-silicon servo-feedback resistors, and in diffpairs operating in subthreshold at 100nanoAmp currents). This produces 1 microvolt per rootHertz random thermal noise on the "clean" VDD rail. Is this a risk?

If you have 60dB PSRR at 10KHz, that 1microVolts becomes 1 nanoVolt Referred to Input, which is a 3dB increase of the opamp's noise floor. And at 100KHz, the opamp has only 50dB PSRR (from a datasheet plot).

Summary: pay attention to the VDD rail random noise. And don't think about using switchRegs in these systems, unless you

---- design the Ground, with slits, etc to keep trash away from the opamp

A graph in the datasheet of the opamp shows it clipping with an output voltage swing of only plus and minus 2V into the 26.1 ohm resistors which might not be enough.

1
Op Amp Input Offset Voltage vs Common Mode Voltage
1
Current-to-voltage opamp in DAC application: snubber network between inputs
1
Asking about supply voltage of AD8672
3
Why is the output of a high-pass filter not 0 when the input is 0?
1
Op-Amp Input Common Voltage Range for specific gain
0
Feedback resistor and capacitor calculation for transimpedance amplifier