Methods to accurately move an object across a 2-D plane

This is the opposite/complement of my previous question, which concerned measuring the precise position of an object as it is moved/drawn by someone over a short duration. Assuming I use one of @Rocketmagnet's suggested approaches (probably using linear encoders), next:

Suppose I have tracked/recorded the X-Y position data as an object is moved arbitrarily through some pattern across a 2-D plane by someone:

In other words, I would like the system to carry/displace the object from the recorded (X1, Y1) to (X2, Y2) to (X3, Y3) and so on. Again, completely constrained to a 2D plane/surface, like so: 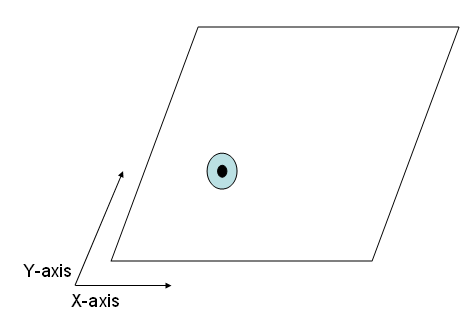 The one potential solution I have considered for this (and I think one that is easy to implement) is to use motors placed on the edges but somehow connected to the object. But I am not sure how to connect them in a way that allows 2 degrees of freedom simultaneously, and moreover, I'm not sure how/if it's possible to attain the desired movement accuracy using motors.

So my question is: What are potential methods I can try for this kind of accurately controlled 2-dimensional movement? There are very few physical limitations on my setup as it currently stands, so I am open to toying with (reasonable) implementations of any level of complexity!

One piece of good news is: Since I will have a precise measurement/tracking system (from the previous question), it would be possible to integrate feedback / calibrate during the movement, which I suppose will be essential if I want to assure the 0.5 mm maximum error.

EDIT: In case the exact application is of interest: The system is my attempt at a simplified electronics-art demo of action-replication, i.e., a person's action is recorded and it is then duplicated either after a period, or on a duplicate system nearby. I initially tried working with shape memory alloys (nitinol specifically), but recording a 3-D movement of a multi-point shape was not easy (FAR from it!), hence my simplification to a "single-point" object across a 2-D plane.

You might as well combine the measurement and replication into one system. Let me start with my previous answer to your question: Idea 4

You already have linear bearings and encoders set up to measure the motion of the object. Now all you need to do is to actuate those bearings. Normally, if you were building something like a CNC milling machine, and you wanted to actuate linear motions, you'd use a ballscrew and a stepper motor. 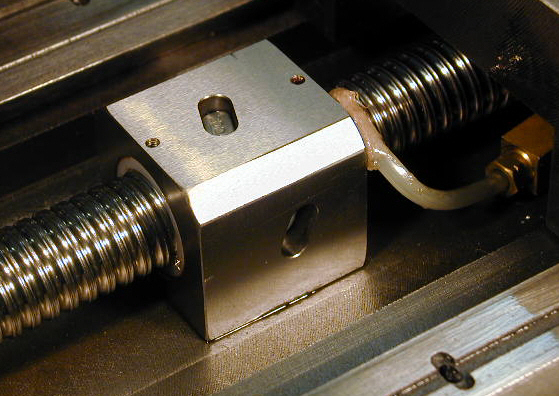 The problem with these is that they are not back-drivable, and therefore you won't be able to move the object yourself. Two options: 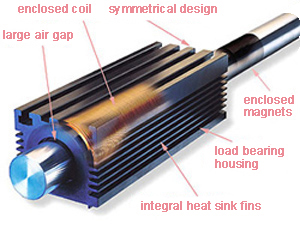 The good news is that, if you can afford it, you can buy complete linear motor motion systems from companies like Aerotech or Baldor Motion. Alternatively, you can ask a small robotic engineering company to build you the whole system. Again, these systems are very accurate. They're used where 0.01mm accuracy is a common requirement, and even 0.001mm accuracy (but then you really need a temperature controlled environment).

Based on your edit, I think that my solution involving linear motors is a little over-the-top. Your application is to simply an art demo which reproduces someone's drawing. While this needs to have good control and resolution to make a faithful reproduction, it really doesn't need the accuracy you originally specified.

First we should clear up some often misunderstood terms: Accuracy, resolution and repeatability. I suggest reading the Wikipedia article Accuracy and precision.

What you need is good resolution in the measuring part, probably 0.1mm. You probably need fairly good repeatability, again, let's say 0.1mm. However, you don't really need great accuracy. For example, if the reproduction always came out identical to the original, but 3mm offset to the left, then I'm sure you'd be happy. Likewise, what if the reproduction was 0.5% too large? Would that really be a problem?

For the measurement phase, I recommend using the string pots. They're simple to set up.

For the reproduction phase, what you want to make is a plotter. 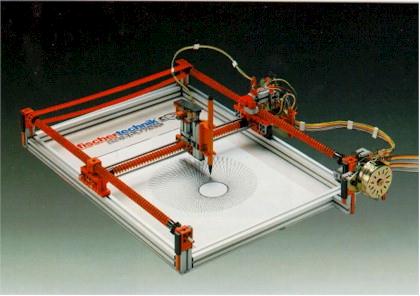 These are not difficult to make yourself, and people make them all the time. Check out Contraptor Plotter for example. Or the many other examples on the web. 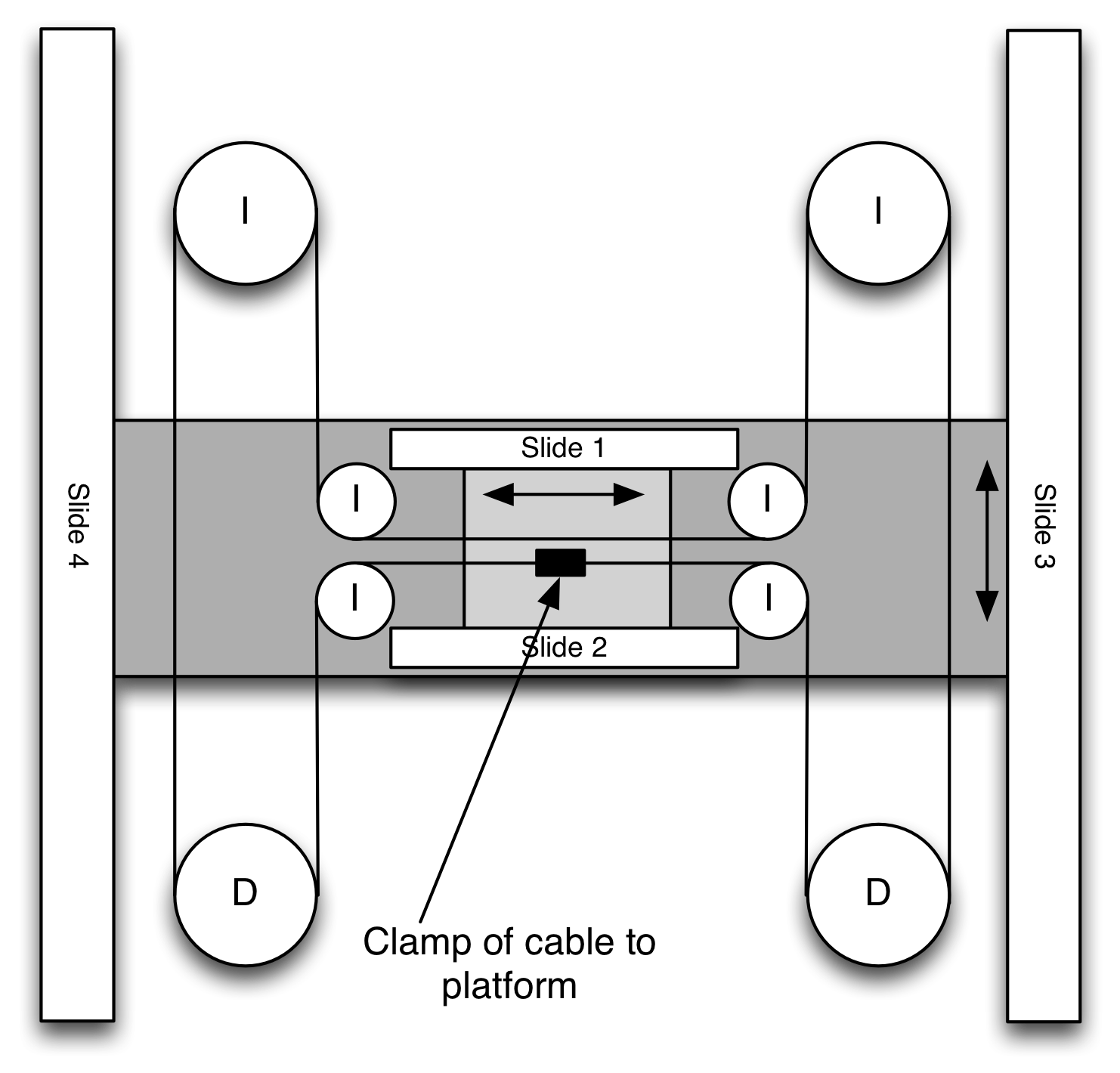 Cable is anchored to light gray platform (shown with arrow)

If driven pulleys are driven in opposite directions (CW and CCW) at same rate. Bigger platform translates up and down the page.

If driven pulleys run in same direction (both CCW say), smaller platform run on top on big platform left and right on page.

Changing rates and directions of driven pulleys means you can translate in any direction you want.

Use stepper motors on "D" pulleys.

One more way to implement a 2D plotter is this: 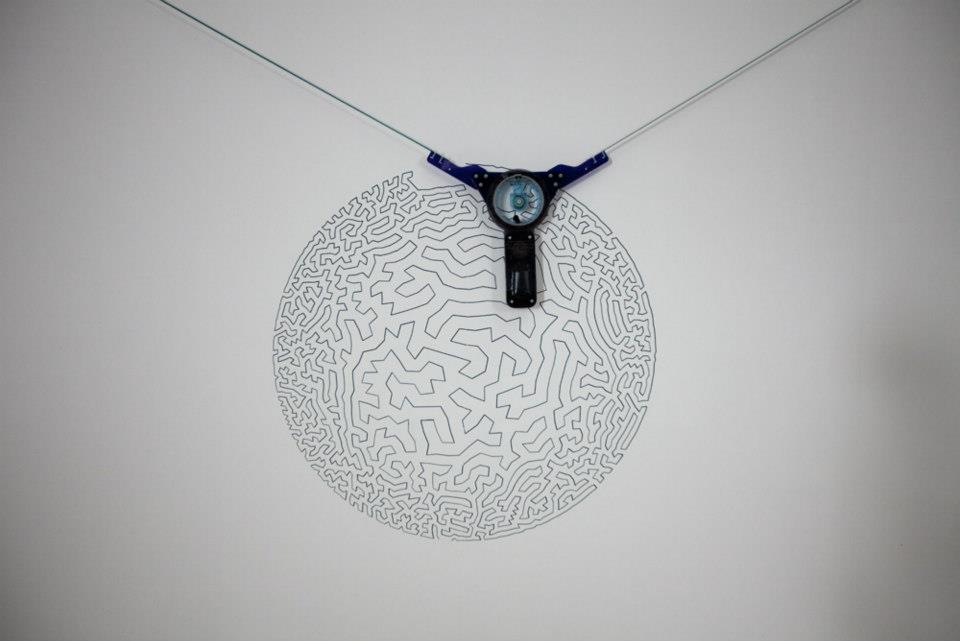 It was used to plot some large drawings at the Mind Out festival of the mind.

As you can see, it's very similar to the 2D measurement using string pots, replacing the pots with motors.

Not the answer you're looking for? Browse other questions tagged sensor motor distance actuator movement or ask your own question.

14
Ideas to measure 2D position of an object constrained to X-Y plane
4
Ideas for precisely moving a small object in 2 dimensions?

9
accelerometer/gyro combo question
3
Sensors to detect and measure movement
14
Ideas to measure 2D position of an object constrained to X-Y plane
8
Will this approach accurately measure capacitance and infer spacing?
4
Ideas for precisely moving a small object in 2 dimensions?
0
Detecting a threshold position in movement
0
Need help with the choice of a motion sensor for use in arctic temperatures