I have TD62783 powered from 12V rail, inputs are driven from 5V rail by HC540. Each output has bunch of leds on the other side along with constant current sink (multiplexed 7 segment display). 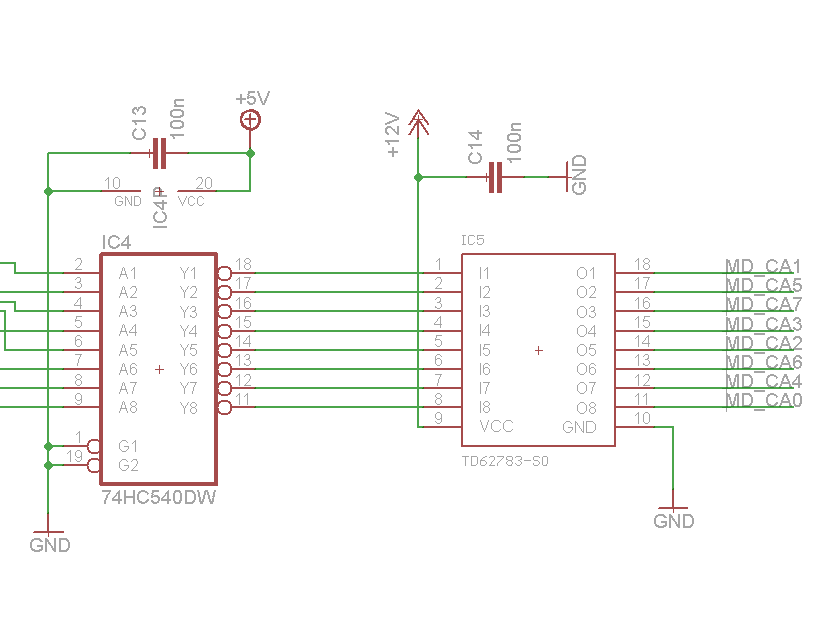 When HC540 provides hi level signal, TD62783 output turn on as it should. But if then signal goes low, output does not turn off as quickly as it should. It shuts down very, very slowly, so in effect i have large "crosstalk" between LED displays. Oscilloscope shows this: 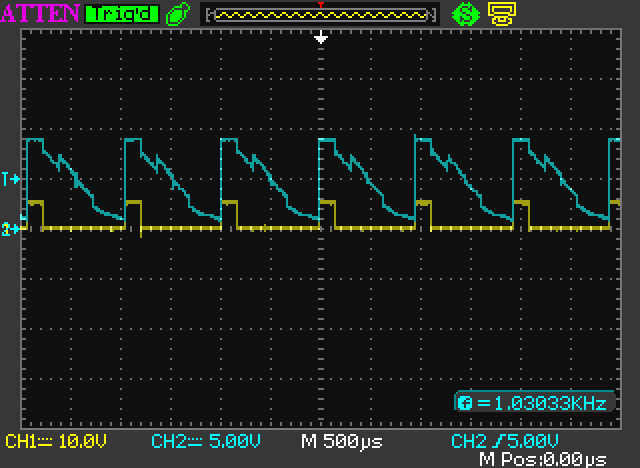 Could someone tell me what may be causing this?

There are quite a few issues with your circuit, but the main one for me is how can it be working in any way at all.

You, however, are using a 12V supply, so this drop should not be too much of an issue, as it is in the 5V circuits I have seen.

LEDs forward voltage is less than 3V, every single volt above that is just wasted power.

The TD62783 can push more than 500mA, at 12V this would be 6W between a LED and the driver, and that is for just one channel. Popcorn comes to mind, however:

This is why nothing has blown up yet. You are trying to pull currents out of the LED cathodes with a device that cannot pull current at all.

So, the real question in my mind is what can possibly be pulling that node down at all, how can these be going down so fast, and how are those LEDs lighting up?

The only possibility I see is leakage currents, enough leakage to pull 10V down to zero in 1ms. Assuming 1000pF in the LED nodes, that would be ~10uA. Which would not be unreasonable for the back-polarized protection diodes of the TD62783 (and less than the 100uA maximum specified in the datasheet). But this should be nearly unnoticeable in an LED.

Not the answer you're looking for? Browse other questions tagged multiplexer led-driver pnp or ask your own question.

5
Multiplexing two 7-Segment displays (Ghosting issues)
0
What does this digital multiplexer (CD54HCT151) output when the selected input is floating?
0
PNP transistor with audio signal output on collector is used to drive opto-isolator. How does it work?