How to switch between usb host and slave mode on a micro usb programatically?

Is it possible to program some chip that can switch between USB host and slave mode over an single micro USB cable talking to an Android device?

It would be OK if there was a slight pause between the switch if we have to reconfigure the chip to reconnect to the Android.

I don't need to be connected in both modes at the same time.

I have a Android device that supports USB file transfer mode so I can pull files from my GNU/Linux laptop, so you connected to it from the PC where the android device is in slave mode. And you can attach to it with an OTG cable and the device is in master mode so I can attach a external keyboard. I can switch between it by pulling out the cable and switching between them.

Even better would be to able to have both master and slave connected at the same time via the same cable. Ideally I could connect to a RasPI or some other programmable micro controller like Arduino. But I am not sure exactly.

I found this note that uses a FTDI Vinculum II controller https://www.ftdichip.com/Support/Documents/AppNotes/AN_323_VNC2_Host_to_Android_Open_Accessory_and_FT232.pdf but I don't understand it all yet. Does this look like a possible solution?

Any simple devices like rasberry pi that could be used?

Just like the chip in your phone, many (if not even most) of microcontrollers with USB interface can be programmed to be a host or a device, and could hypothetically even switch these roles. Exactly as your phone does!

A USB bus can't have multiple masters, so the "optional" goal of letting the phone be device to a PC and host to a keyboard is impossible to achieve on the same bus.

Since USB is such a large market, these things are produced by many IC manufacturers, for example Texas Instruments has a whole range of USB2 and USB3 switches; take the TS3USB30E as an example of a USB2 switch. Octopart tells me it can be had for little more than 1€. 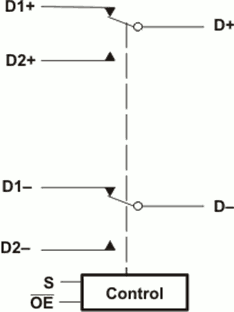 To let the phone know that it's supposed to be in host mode, you will have to pull down its "ID pin" to ground (that's the fifth pin in a micro-USB connector). You can do that by means of yet another simple analog make-or-break switch (example).

Not the answer you're looking for? Browse other questions tagged usb usb-device ftdi android usb-host or ask your own question.

6
Is it possible to use a Microchip PIC32 as a USB host and device at the same time?
9
USB host-mode on uC, to support small pre-defined set of USB devices
0
USB Mass Storage Device automatic backup system - How many USB Host Controllers are required?
1
USB OTG port in slave mode, possible to use USB-A ports in host mode simultaneously?
1
Android USB Accessory as a Device?
1
Is the following USB connection possible: Host USB to converted to serial (FTDI) and then converted back to USB (FTDI)
0
How to charge a USB-C host with ACA alternative?
0
Difference between USB host & device when connected to the Intel PCH chipset
2
Connecting CDC device to Android over USB-C, with concurrent charging. A cheap option?
2
USB communication between Android phone and MCU while continuously charging the phone