I have been working on a project where so called Lundell alternator plays a crucial role. I haven't got any experience with this device sofar so I have decided to study some literature regarding this device at first. In the Power electronics handbook 3rd edition I have found on page 655 following equation describing alternator output power \$P_o = \frac{3\cdot V_o\cdot\sqrt{V_s^2-(4V_o^2/\pi^2)}}{\pi\omega L_s}\$, where \$V_o\$ is the battery voltage, \$V_s=k\omega i_f\$ is the back-emf voltage magnitude, \$\omega\$ is the electrical frequency and \$L_s\$ is the armature leakage inductance.

From the graph it seems that the alternator power function has "interesting" behavior only for unrealizable (at least in standard vehicle with 12 V lead-acid battery) voltages. Does anybody have any suggestion what could be the main idea behind this function? Thanks for any suggestions. 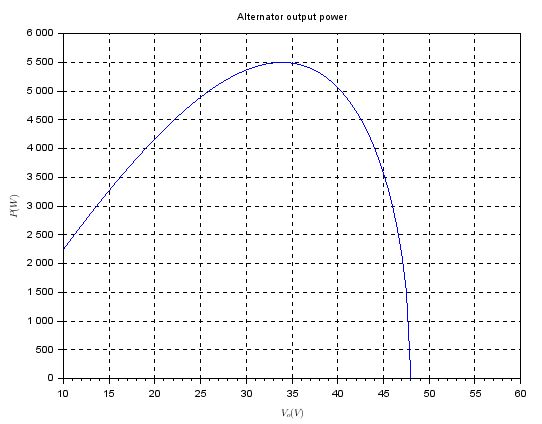 Summary: To be maximally useful an automotive alternator requires a voltage-power characteristic in the about 10V - 17V range very similar to what is shown in your graph. The rest of the (usually un-utilised) curve is a consequence of optimising an alternator to meet this requirement while minimising cost constraints.

Detail: To be "maximally useful" an automotive alternator starts charging at low engine RPM, produces maximum current "as soon as possible" and increases current as conditions allow across the engine speed range. In most cases 'nobody would complain' if an alternator

The above behaviour would mean that

Not seen here is the RPM-Voltage curve which also has an important bearing on results. An alternator's loaded full-power output has an approximately linear voltage-RPM response. (Voltage will drop somewhat with increasing resistive-voltage-drop if load current increases with voltage (resistive load) but the voltage-RPM affect predominates). For the "idling car on a wet day" example Voltage at a sensible idle needs to be enough to provide power for the electrical load and provide a degree of charge for a typical battery, The various factors involved make this a compromise whose 'solution' is implemented by alternator performance and drive pulley settings.

This paragraph is essentially the answer to your question:

A factor not mentioned in your formula and which will have an affect on the result is iron saturation in the magnetic field. This will set some upper current limit on alternator output at any RPM and is probably the limiting factor at all except the highest , and just possibly the lowest, voltage values shown on your graph.
As long as the P/V values shown on your graph exceed Isaturation then the alternator will (very roughly) approximate a saturation controlled constant current source. This is true only at maximum output and field control is then used to reduce output when lower power levels are required(as is usually the case).

*re "usually unutilised" - I have seen 'systems' which take advantage of this ability to produce substantially more power and voltage than is usually required.
The usual regulator is unplugged and a specialist regulator is used. In the systems that I am aware of even higher voltages than your graph shows were available and it was possible to operate selected "mains" power tools from the system. Nowadays this could be done with a modern electronic "inverter generator" system taking input at say 50V, and boosting voltage to produce "mains AC" at 50 or 60 Hz.

An upper practical limit to this system is set by the operating breakdown voltage of the alternator diodes, and an upper theoretical limit is set by Vmax in your formula.

The system mentioned above mention existed in the 1950-1970s time frame and would have had little or no electronic content. I had the opportunity to buy such a controller "for interest" long after they had vanished from the market but, sadly, did not do so.

The curve shows the power that the alternator can produce. In an automotive application, the voltage must be limited to the maximum voltage that is safe for charging the battery and operating loads. Since it must be designed to produce enough voltage to avoid draining the battery with the engine running ad idle speed, the alternator is capable of produce much more voltage than necessary when operating at higher speeds. To avoid excessive voltage, the regulator reduces the excitation current when the alternator speed increases.

Not the answer you're looking for? Browse other questions tagged power-electronics electric-machine alternator or ask your own question.

3
To what extent are alternators "flexible" to variations in input speed and output voltage?