How to determine the correct polarity of the diode

I'm having trouble knowing when is the cathode negative or positive and vice verse ( I'm not talking about the symbol ) I'm saying, when do the polarities change? For example, look at these 2 pictures

That highlited diode oddly has a positive cathode, but normally the cathode is the one supposed to be negative, so I don't know when to decide the polarity of each diode.

In the following picture, what determines the polarity of the diodes and how can I understand it? 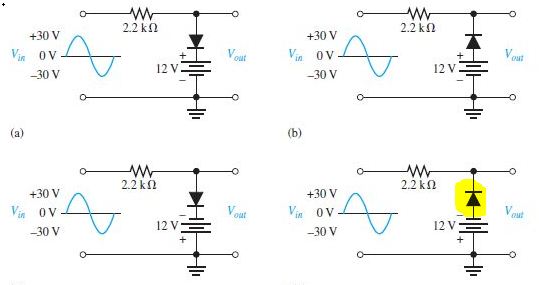 In general, you can consider a diode to be open-circuit when the voltage on its anode is less than that on its cathode.

The bridge rectifier situation is easy! Remove the reverse biased diodes on alternating half cycles. The 'dot' in the captions refers to the dot on the transformer secondary winding.

In each of the other circuits you need to work out at what input voltage the diode becomes affects the circuit. Draw that line on the input waveform and you'll be most of the way to your answer.

Load the image into an image editor, mark up the positions as I've described then mark up the resultant output voltage. (Just overlay both on the blue sinewave that is in the question.) Post your effort into your question and we'll see if you are understanding it correctly. 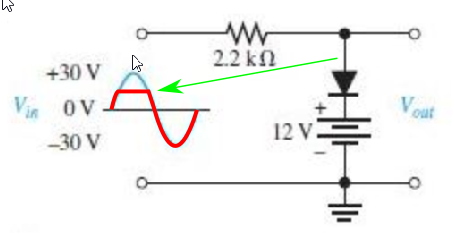 *Figure 2. (a) When the input voltage exceeds 12 V the diode will conduct and current will flow into the battery. The output will be clamped at 12 V. At all other times the output will follow the input.

Now, you do the same for the other three and post your results in your question.

Your first drawing shows the polarity of the voltage across the diode when the top terminal of the transformer is positive, and diodes D3 and D4 are reverse biased, and not conducting.

D1 and D2 will have anode positive, and be conducting - they are apparently ideal diodes as they are shown with zero volts across them.

When the top terminal of the trasnformer is negative, D3 and D4 will have the anodes positive, and will be conducting, while D1 and D2 will be reverse biased, and not conducting.

The diode polarities in that drawing are the actual voltages applied to the diodes, not some innate properties of the diode.

Not the answer you're looking for? Browse other questions tagged voltage diodes or ask your own question.