I'm learning a lot of this as I go, my background is mostly in programming. I'm trying to setup a timing circuit for two sets of lights going into a model, and am trying to determine the best way to go about it. The setup is this: The first light set starts on, then goes off at 0.5s then stays off for 1s. The second set of lights come on for 0.025s in the middle of the on and off periods of the first lights so on at 0.25 sec for 0.025s and then again at 1s.

I've done some rough prototyping using a 555 oscillator, a digital counter, and logic gates to hard code the timing for the shorter strobe lights. I know I can hard-code a sequential logic for the longer lights, but that seems as it would take up a bit of real estate using just straight logic gates.

I've considered possibly using a programmable logic array or FPGA to handle the logic for the counter output, but don't know enough about either to know which would work best.

Ideally I want to avoid using an Arduino unless I can put a small processor on the board instead. I need to keep the design as compact as I can since it will be installed inside some very tight spaces inside a model.

The overall timing period of the lights can change a little, the key is the ratio between the two.

I've looked around and found questions here about 1 set of lights with verying timing, but not a situation like I have here. Any help or suggestions is much appreciated.

The most basic microcontroller will have all you need to generate the timing with no additional components - an internal oscillator, a timer which can be run from a scaled clock source, and enough memory for the simple logic to produce the signals. An ATtiny has an internal 8MHz clock, can run the timer at a 1/256 divider to give an 32us timebase that would allow the 16 bit timer to run a cycle up to 2 seconds, you'd then just need to pick on and off times for two outputs. Available in SOT23 package, as are PIC10s.

Although I don't suggest this is better than a simple uC design. This is how I might have done it in 1975 when I graduated just after CMOS was new.

The key is to design the timing chart then realize how to implement it in the tools you know how. If not good enough, learn a new tool like PIC machine language. 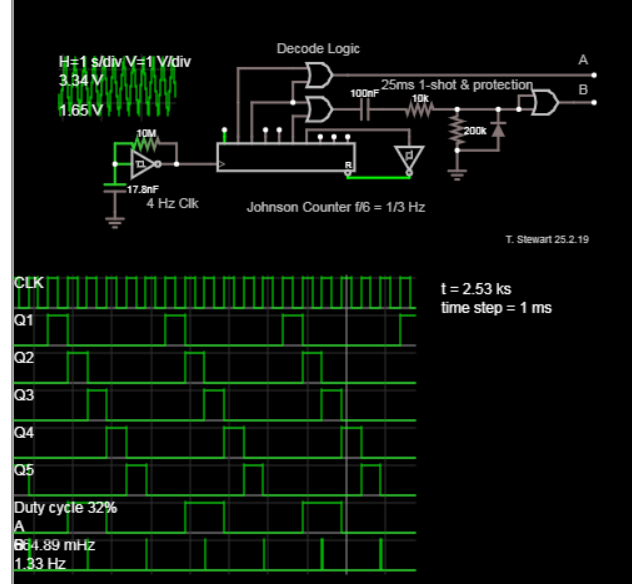 Not the answer you're looking for? Browse other questions tagged digital-logic timer logic-gates counter programmable-logic or ask your own question.

2
how to create a square wave with large duration and high duty cycle
3
Johnson Counter VHDL
3
Timer PIC16 not working.. is it my code?
2
Modern 3.3V CMOS Logic gates
0
Build a running LED light logic circuit
0
Is it possible to load values to a counter upon startup?
0
Design 5 bit counter with two control inputs (direction and stop)
2
how do I implement a start timer in a digital circuit
1
How to wire up a street light to change lights in specific states (digital circuit)