I've recently bought a ModMic4 for my PC, but the signal level is very low and have to amplify it quiet a lot digitally, which introduces ton of white noise and I have to use noise supression which degrades the overall quality. I would like to get this microphone to it's full potential.

I've read that the ModMic requires a 5V bias power to have correct output levels. It seems very few PC sound cards can supply this on the mic input. I have an ASUS Xonar U7 MKII and also tried the Creative BlasterX G5 and my onboard Realtek audio. Neither of them worked well. I could purchase the official ModMic card, but I would like to keep the Xonar which has a better headphone amp for my DT 770 and use it's input.

Is there any way to add a power injector to the system? This should be something like a middle man on the Mic wire, and could be powered from USB if I'm not mistaken.

Mod: I've found the following electret microphone powering circuits: Powering microphones Which one of these would probably work?

Mod2: also found this thread here on StackExchange for battery powering microphones: How to provide power to a lavalier microphone? Would these work with my setup as well?

You can use a simple DC-DC isolated converter that you can find online like this that you can power directly from USB.

And a 10uF capacitor and 2k2 resistor connected like below as the link you posted (Battery powered electret microphone): 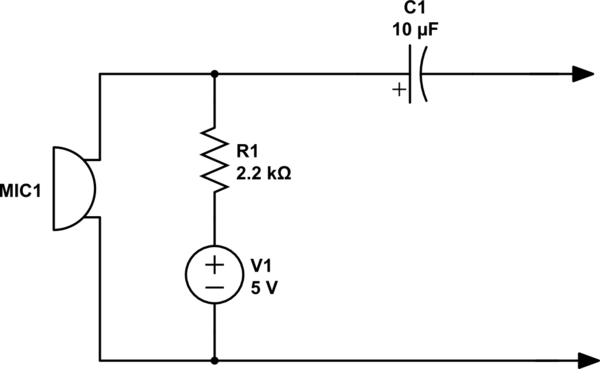 Not the answer you're looking for? Browse other questions tagged audio microphone bias pc or ask your own question.