I am designing a small digital synthesizer. Because of space constrictions, I can only use 3.5mm TRS connectors. RCA is already too big.

If possible, I'd like to include not only an analog output, but also a digital output over S/PDIF (coax).

I know that S/PDIF needs 75 Ohms impedance. Would it be possible to run the signal through a mini TRS jack without problems? The connection on the PCB from the IC would of course be impedance matched, and I would solder the TRS plug directly onto a 75 ohms coaxial cable, with a cinch connector after a few centimeters.

Would a 2.5mm TRS maybe be better? Or does it not work at all?

This was actually quite commonly done back in the day.

In fact, some soundcards had a little auto-detect feature where if you plugged in a mono 3.5 mm plug, they would output S/PDIF, while if you plugged in a stereo one they output analog. Likely the switching was actually implemented in driver software, but it was fairly transparent to the user - somewhere I still have the little 3.5mm mono to RCA adapter that shipped with these.

As for distortions due to impedance discontinuity this does happen, but while you can just barely see it on a scope, normal equipment is not bothered. But early in may career I spent a while trying to debug a product which seemed hyper sensitive to various distortions - a product manager was amazed to watch as I sat there with a Y adapter at one end of a two meter cable changing out various terminating resistors that I had soldered to RCA plugs and alternately made the product work and not work. Ultimately went so far as to calculate a S/PDIF frame with various distortions and load it into an arbitrary waveform generator to demonstrate some of the specific susceptibilities. Turned out however, that the DSP vendor had given us a bad binary-blob for their proprietary chip which mis-operated the clock recovery PLL. When they finally sent one that used the hardware correctly the system stopped being sensitive to the various minor imperfections we'd been discovering in a long list of computer and DVD player outputs.

So in conclusion: it was done, and with equipment that isn't fundamentally broken it works fine.

The S/PDIF data rate is 3.072 Mbps max (@ 48 kHz sample rate), and with biphase encoding, that means an analog bandwidth that's also around 3 MHz. At these frequencies, and given the maximum cable length of ~10m, the small impedance "bump" created by a TRS connector is really not going to cause any noticeable problem.

You might find a SMB or SMC a better match, since they're available in 75 ohm impedance for ~US$5 each. 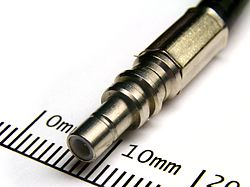 Not the answer you're looking for? Browse other questions tagged spdif or ask your own question.