A project I am working on requires a reliable current limiting solution for a pocketqube picosatellite.

Currently a Texas TPS2553 is being employed which will cut power once the limit is hit. We are concerned that this could enter the power supply into a never ending reset loop due to damage from radiation.

The maximum expected current, during a signal transmission is 135mA. The sleep current is 7uA.

We have come across depletion mode p-channel MOSFETS such as the Infineion BSS126 (application notes) which shows:

1) Is there a more reliable solution than the MOSFET Current limiter shown above?

1) Is there a more reliable solution than this?

A part like this could become a problem with a Single Event Upset (SEU), it isn't rad-hard (resistant to radiation). If the SEU causes a problem in the circuitry of the TPS2553, then it could cause power issues for your system.

It really depends on the system and how this is connected as a whole if there is something upstream that can shut the power off (which there probably is because you have a battery and it needs a DC to DC converter).

With latch ups and satellite design it's beneficial to have:

Interestingly enough, TI has a recent write up on latch ups and how they are prevented in IC's. It is not known if the TPS2553 has been built and tested to the JEDEC JESD78 standard for latch ups. (and good luck finding out, over the years TI has been poor at communicating with engineers, so I only use them if I absolutely have to). But since 2010 TI has some designs conform to this standard, and mitigating latch ups. Below shows a design that is more immune to latch ups with guardlines 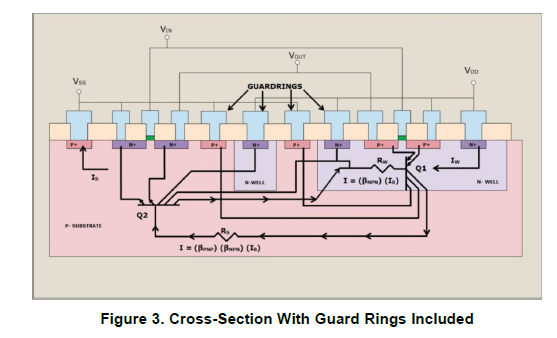 The problem is mostly related to having pairs of transistors (which the TPS2553 has many):

Latch-Up is a condition where a low impedance path is created between a supply pin and ground. This condition is caused by a trigger (current injection or overvoltage), but once activated, the low impedance path remains even after the trigger is no longer present. This low impedance path may cause system upset or catastrophic damage due to excessive current levels. The Latch-Up condition typically requires a power cycle to eliminate the low impedance path. CMOS and BiCMOS circuits use NMOS and PMOS transistors to create the circuit functions. In the design of the CMOS integrated circuit, the proximity of the PN junctions that form the NMOS and PMOS transistors create inherent parasitic transistors and diodes. These parasitic structures create PNPN Thyristors, also called silicon-controlled rectifiers (SCRs). Excursions (overshoots and undershoots) outside the normal operating voltage and current levels can trigger PNPN Thyristors and may cause Latch-Up. Latch-Up is not a risk if the voltage and current levels applied to the device adhere to the absolute maximum ratings. Source: Latch ups SCAA124 TI app note

So it would be more concerning with the driving circuitry of the TPS2553 and having something latch up there and either not being able to control it, or having it self destruct from overcurrent (For example the TPS2553 has an error amplifier (op amp) and many other places which has an output stage that has two transistors in series from VCC to ground. If both of these turn on then you have a short essentially, if the TPS is the thing that is suppoesed to be monitoring current then you have a problem. I would probably go with a circuit that is not integrated with a single high side switch for the load with a pull up and a watchdog circuit on it for resets.

1) Is there a more reliable solution than the MOSFET Current limiter shown above?

A single switch with a watchdog would be better. Odds are the system being designed doesn't have power to waste. Putting a resistor in series with one of the largest loads in the system is not a good idea. This paper has information on the power systems for a nanosat, it would be a good idea to use (or even contact the authors) for information on how they designed their power systems

Source: Nanosatellites in LEO and beyond: Advanced Radiation protection techniques for COTS-based spacecraft

This is unknown, but it doesn't matter what the device is, it will most likely latch up. The way to design spacecraft power systems (or any electronic system) is to plan on the device being fully off or fully on from radiation and then allowing the system to clear the fault (by power cycling). No devices is resistant to latch ups completely but some more than others.

Device resistance is determined by many factors including the materials and construction. The only way one really knows is if the device has been designed and tested against radiation. If you want radiation tolerance, then buy rad hard parts like these MOSFETS. But you still have to plan for latchups due to SEU's. There are some very very high energy cosmic rays out there, and they can ionize anything.

If you can afford a few volts of insertion loss, a simple and reliable current limit with LM117:

The resistor should be fixed 8.2R (for ~152mA limit) or 9.1R (for ~137mA limit), and able to dissipate at least 0.25W even at the highest operational temperature. If the radiation is extreme, you can use a radhard version of LM117, like SG117AR. https://www.microsemi.com/existing-parts/parts/56283

Not the answer you're looking for? Browse other questions tagged mosfet space satellite or ask your own question.

4
5V 5A rail controlled by 3.3v microcontroller - dual switching or power mosfet?
1
Source generator for Satellite Tuner input
3
Can anyone explain Phantom Power and, specifically, how it's used in satellite television systems?
0
Do you really need a satellite dish to communicate with satellites?
0
Satellite array antenna beamforming - basic intuition help
3
Using a depletion mode mosfet as a current limiting device
4
How does satellite TV get through in rain?
0
SIPMOS as current source
1
Are nano/cube satellite electronics components special for space?