The commonly known skin effect formulas are derived and only apply to solid conductors. The commonly used "skin depth" only applies in these cases. It is for this reason that in some applications tubes are used, as these are much more weight-efficient than the same diameter wire at a high-enough frequency.

From the skin-depth formulas it is known that a lower conductivity material (e.g., aluminum) has a skin depth that is considerably larger than a higher conductivity one (e.g., copper). As the formula predicts, skin depth is inversely proportional to the square root of the conductivity. If we carry this to its logical consequences, it should be the case that for a conducting tube (which has an insulation core) skin depth should be larger than for an equivalent solid conductor.

As an alternative intuition a thin-walled insulated-core conductor would have nearly twice the surface area of a solid conductor. So it should asymptotically approach nearly half the resistance at a high enough frequency.

In effect, as can be seen in this paper from HB Dwight in 1922 (possible paywall), the increase in resistance w.r.t. frequency for a tube whose wall thickness is 20% of its diameter is more than a factor of two lower than for a solid wire. 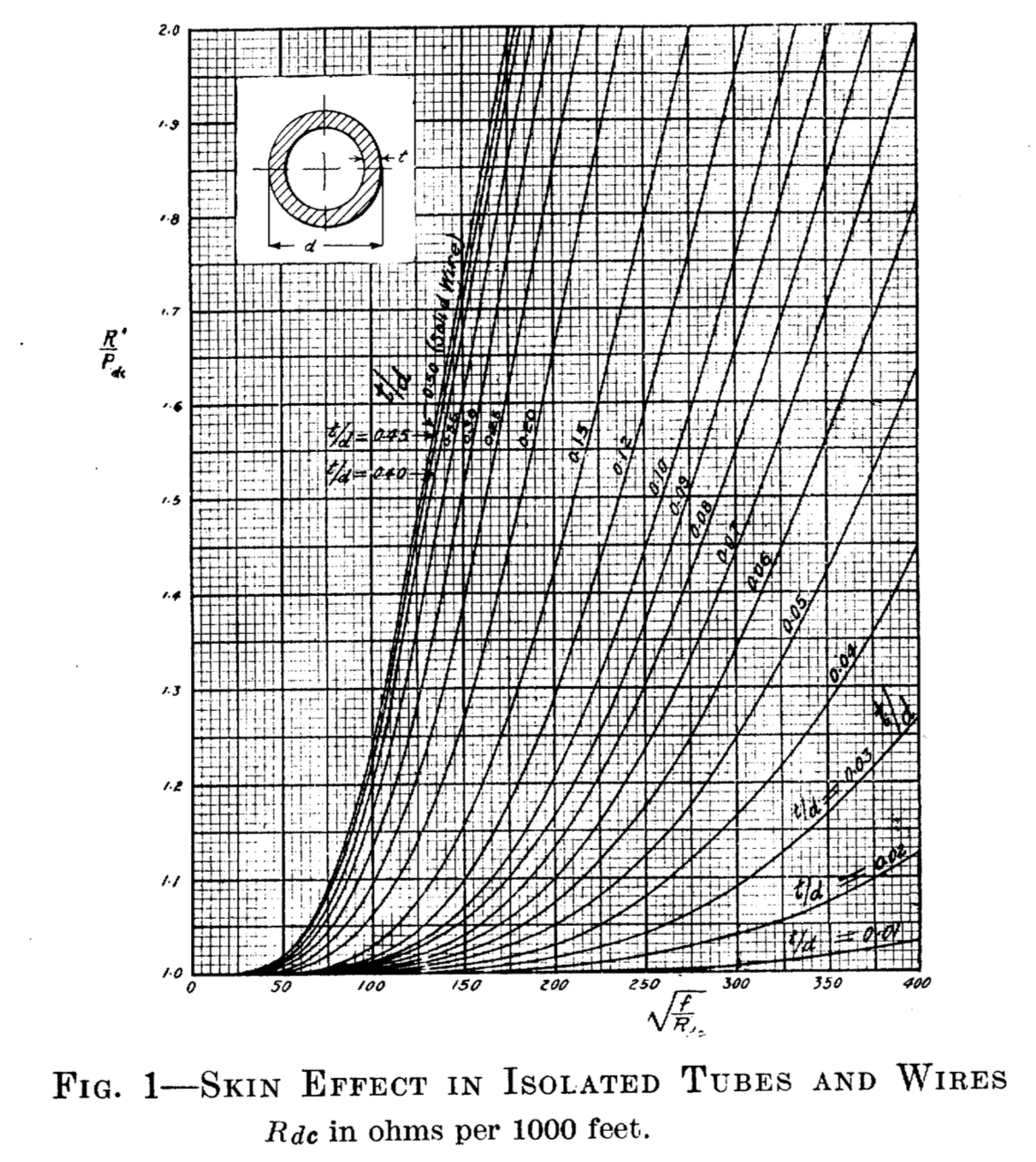 From the above curves it can be seen that a tube with t=200µm and d=1mm, due to the increased actual skin depth, should have less than 50% of the impedance increase than a solid d=1mm wire (do note that the curves are normalized w.r.t \$ F / R_{dc} \$, so interpretation is a bit tricky).

Similar effects (although not as dramatic) can be observed with individually-insulated stranded wire.

In medium-frequency applications, as for example switching power supplies, it is common to use Litz Wire a multi-stranded insulated wire which reduces the losses due to skin effect but becomes less and less effective at higher frequencies (~1MHz) because of the proximity effect and the capacitive coupling of the individual strands.

Probably more gains (particularly with respect to proximity effects) could be obtained if there were multiple individual strands embedded around the periphery of a non-conducting core.

Have I missed something in the theory?

If not, why isn't insulated core wire (either tubes or strands around a core) being commercially exploited for high-frequency inductor applications?

As John Birckhead answer points out, flat wire has basically the same advantages with none of the disadvantages (e.g., fill factor). But this leads me to ask:

Why isn't insulated-core flat wire being used for these applications? It should have the same advantage of flat wire with nearly half the resistance at high enough frequencies. Are the possible gains inconsequential?

No, you are correct in the theory, but your approach leads to an unnecessary increase in volume when compared to using flat wire, which is both easier to manufacture and provides a similar advantage for skin effect and the advantage of volumetric efficiency.

Wikipedia entry for Litz wire contains a direct answer your question of "Why aren't hollow tubes used instead?":

One technique to reduce the resistance is to place more of the conductive material near the surface where the current is by replacing the wire with a hollow copper tube. The larger surface area of the tube conducts the current with much less resistance than a solid wire with the same cross-sectional area would. The tank coils of high power radio transmitters are often made of copper tubing, silver plated on the outside, to reduce resistance. However tubing is not flexible and requires special tools to bend and shape.

The article goes on to describe why Litz wire provides an alternate solution.

When you are running 1000 kW or higher, you better believe the copper loss needs to be minimized.

Additionally, the hollow core is used for water cooling.

Sometimes the copper is called "hollow bar". It comes in rectangular or round. It is not uncommon to order a "mill run" to get the hollow bar and thickness desired. 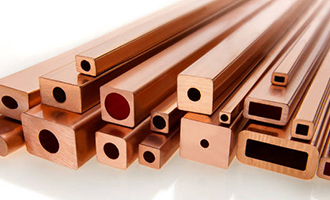 There is indeed a variant on insulated core wire for very high frequency applications. It's called a waveguide. It's a hollow tube used for conducting RF. I am of the understanding that the signal travels in the inside of the conducting shell rather than the outside, but the idea of only needing the conducting shell as thick as the skin effect dictates is there.

Not much use for inductors though.

Not the answer you're looking for? Browse other questions tagged inductor high-frequency skin-effect litz-wire or ask your own question.

4
Does solid/multi-stranded/Litz wire make a difference in binary serial output?
3
Is the skin effect a factor for low-current AC applications?
2
Would using litz wire for an inductor change the inductance compared to regular wire?
7
Can I build a high-frequency SMPS choke out of an arbitrary coil of wire?
4
Does stranded wire reduce resistance from skin effect when strands are not insulated?
1
Interleaving in litz wire transformer - to be or not to be?
1
Skin effect with superimposed frequencies
0
Skin depth calculation for non-sinusoidal currents
15
Cable shielding adequate for video, but not audio frequencies
0
How do skin-effect and proximity-effect behave for flat-conductor power inductors?