Electrician from Australia here. Just having an issue with a heater fan in a bathroom for a client. According to the diagram I have posted, I can wire a second fan up to this and it should all work.

The issue I am having is that because of the permanent supply to the unit, once that thermal switch goes above 55C it supplies power to both the fans via the 20W 330ohm resistor. By adding a second fan as drawn by the diagram, this also will be powered in an over current situation via the resistor.

The issue is, I don't believe the manufacturer has realised the implications of having a second fan fed from the ceramic resistor, and it heats up and blows the thermal fuse at 93C.

So what wattage resistor is required to power the 25W main fan in the unit, and a second 60W fan external to the unit?

I tried working it out as below;

With the second fan of 60W in the circuit, we now have 85W load.

Is my maths and methodology correct?? 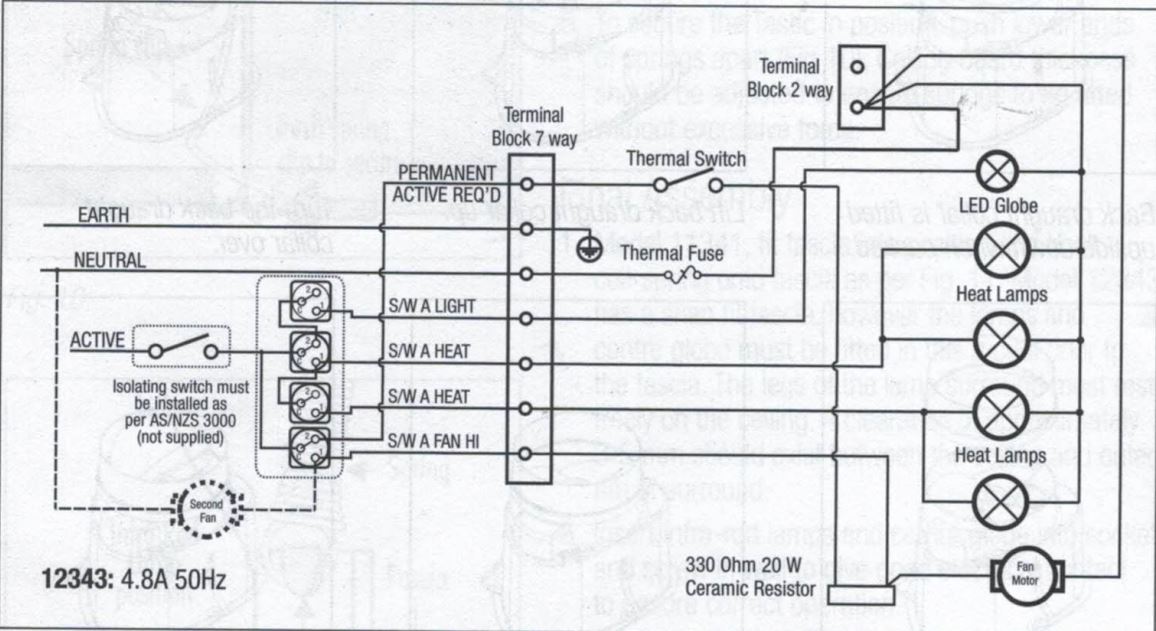 When the speed of a fan is reduced, the power required to drive it is greatly reduced. Power is proportional to speed cubed. That means reducing the speed to 2/3 of full speed reduces the power to 30% of full power. However, that calculation does not fully take losses into account.

In addition, the voltage drop and current calculations are not a simple matter because of inductance in the fan.

The bottom line is that it will not really be possible for you to verify if it is ok to add the second fan without connecting it and observing if the resistor gets too hot.

Not the answer you're looking for?Browse other questions tagged resistors speed diagram or ask your own question.