Fuel sender - need something to convert ohms to volts?

Here's the catch, in our tests most fuel senders we worked with seem to send the data as ohms/resistance

In rare cases, we found some fuel senders use volts, but most use resistance. Therefore I need to find a gadget (ideally one that already exists I could buy off the shelf) that will take the input from the fuel sender, and convert it to volts, so I can connect it to the gps tracker.

I've looked into arduino stuff, but it's a bit overkill for what i need, so was hoping a micro controller already exists for such a task (if micro controller is the correct phase) - Ardunio coding is not an issue for me, and have done some C coding for a car tuning company previously, so am familiar with the basics, but the price/setup time is quite high for this application.

So my questions are

The "best" solutions always come from the "best" specs in the question.

e.g. At a minimum, it requires a definition of the transfer function for gain, Offset, linearity and desired output Voltage range with tolerances for climatic range and supply tolerances.

This uses a linear gain-controlled DAC Vref to adjust a constant current source thru the sensor using Rail to Rail OA's from a single supply. 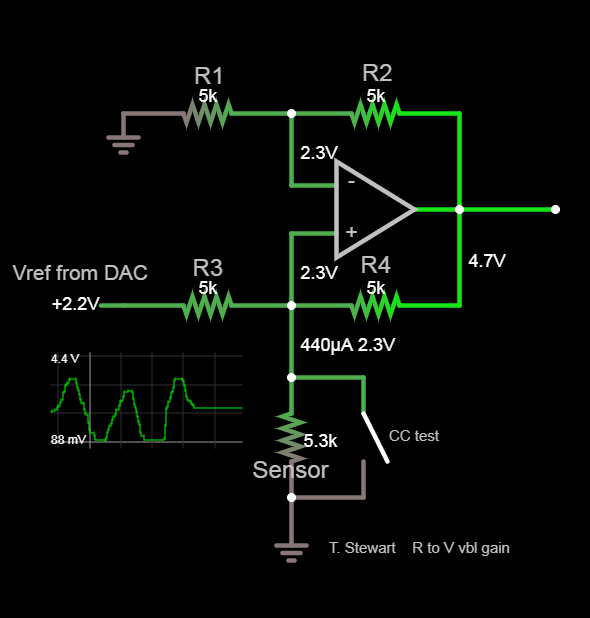 2
Why do my 3 custom voltage pulses stop working as soon as I plug in the A1362 Hall-Effect sensor?
0
Transforming volts to bits
0
How to change the polarity of 0~5 volts get -5~+5 volts?
1
ways to control resistance by microcontroller
0
How can I connect fuel level sender to a gauge and micro-controller simultaneously
8
How can I make 20-200 ohm variable resistor look like a 20-240 ohm resistor?
0
Converting fuel level sender reading
0
Duplicating fuel and oil sender resistances