Does this still count as a class B amplifier?

The PNP's emitter terminal is grounded instead of the collector terminal.

is the formula:Pi= (Vcc)(Vout peak)/(pi*loadResistance) still applicable for this?... the out put has crossover distortion and Im not so convinced that using the default formula for efficiency would give me the right answer for this circuit.I mean you cant use Po= (Vop-p)^2/8RL right? cause the o/p isn't a sinewave anymore? 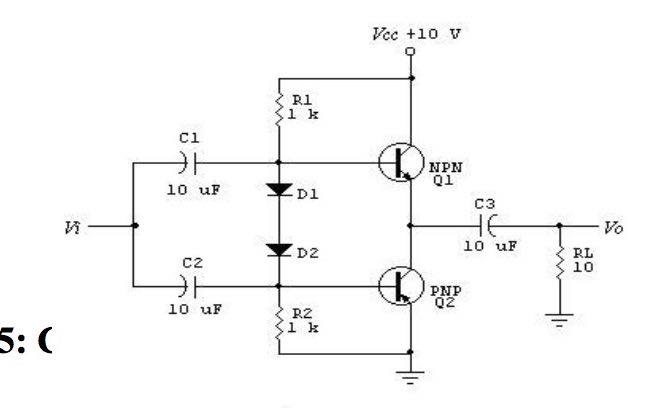 Please explain the current paths through Q2. What is your justification for reversing Q2?

Contrary to what some seem to think, yes. It will still be a class-AB stage. Note that it is class-AB, as the diodes ensure some bias current without an input.

Q2 is backwards biased, which means that its collector and emitter are reversed and it will conduct in the reverse direction.

In practice what this means is that instead of a beta of, let’s say 300, it will have a beta of 30 or so. Which in turn means that base current will be much higher than if it was connected properly.

The base-collector junction has a different doping profile than the base-emitter junction. This also means that its forward drop will be lower which, in this configuration, further increases the quiescent bias current.

The large imbalance between base currents of Q1 and Q2 will guarantee that the quiescent bias voltage of the output will be considerably closer to the supply voltage than it would otherwise be.

An audio amplifier output power is rated with a sinewave input. A squarewave input or output produces about double the real output power since it has many added high power harmonics. Peak to peak power is used only by marketing liars.

The two input capacitors are never used in a real amplifier, they are used only in an old school circuit.

Not the answer you're looking for? Browse other questions tagged amplifier class-b-amplifier or ask your own question.