Here's an example of a fifth-order Chebyshev low-pass filter with ideal components. 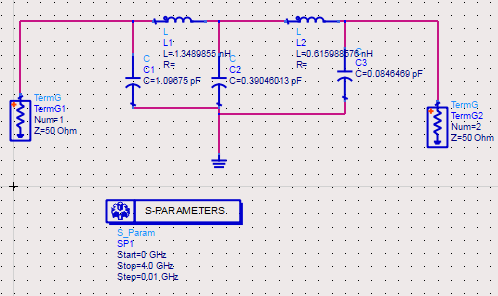 The reflection coefficient will spike in two spots of the pass-band on Chebyshev's prototype filters like so: 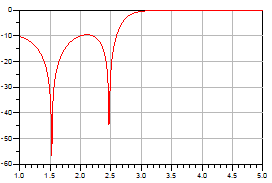 I tried different orders of Chebyshev filters and I tried swapping the filter design to Buttersworth/Bessel, but they all had their own characteristic reflection coefficients that way exceeded the desired value (example, Bessel's reflection coefficient would be very big towards f=0 Hz and would decline somewhat fast, though it was still too high of a value from what I desired).

So I have a few things I'm pondering about it.

What things should I consider when I want to minimize reflection coefficient up to a point?

And if someone thinks that I've fundamentally approached the problem in a bad manner, that'd be great to know as well.

If you are building a lossless filter, the only way that you can prevent power from going to the load is to reflect it back to the source. And a filter's response is continuous with regard to frequency (and keeping in mind that a dip down to \$-\infty\$dB is accompanied by a phase reversal, so the actual number is going through zero in a continuous manner).

So yes, you're fundamentally approaching this in the wrong way. If you want to maintain the load impedance on the source within limits then you need a diplexer, so the out-of-band energy from the source gets burnt up in a load resistor. This is not usually a thing for transmitting applications -- the only place that I've seen it (in my admittedly hobby approach to RF design) is between a mixer and an IF strip in a radio designed for the lowest possible 3IM products in the mixer. 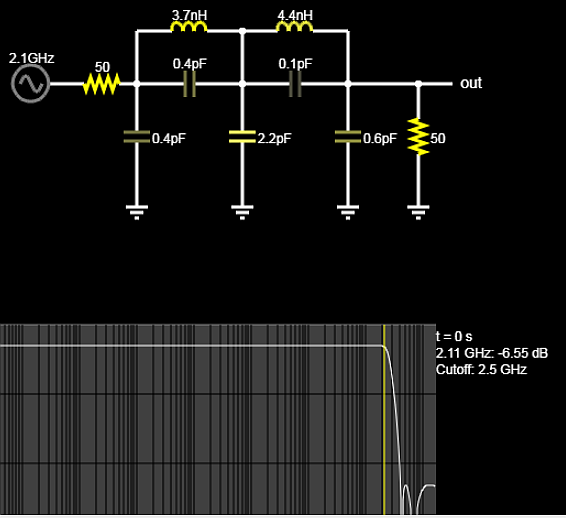 You'll need to reduce the ripple so as to improve the reflection coefficient in band.

I suggest you to play a little bit with this filter tool: www.iowahills.com/Downloads/Iowa%20Hills%20RF%20Filters.zip

That way you'll get more familiar with the influence of design parameters on the frequency response of your filter.

In my opinion, if you don't need linear phase, you may consider using an elliptic filter. The topology is the same as Chebyshev II, but it exhibits much better out-of-band rejection.

Not the answer you're looking for? Browse other questions tagged rf circuit-design filter or ask your own question.