The question in a study book says to find the current through R2. I have very little experience dealing with dependent current and voltage sources, so I get thrown off when performing loop current (mesh) analysis. Here's the work so far, but the unknown of the voltage I1 makes too many unknowns. 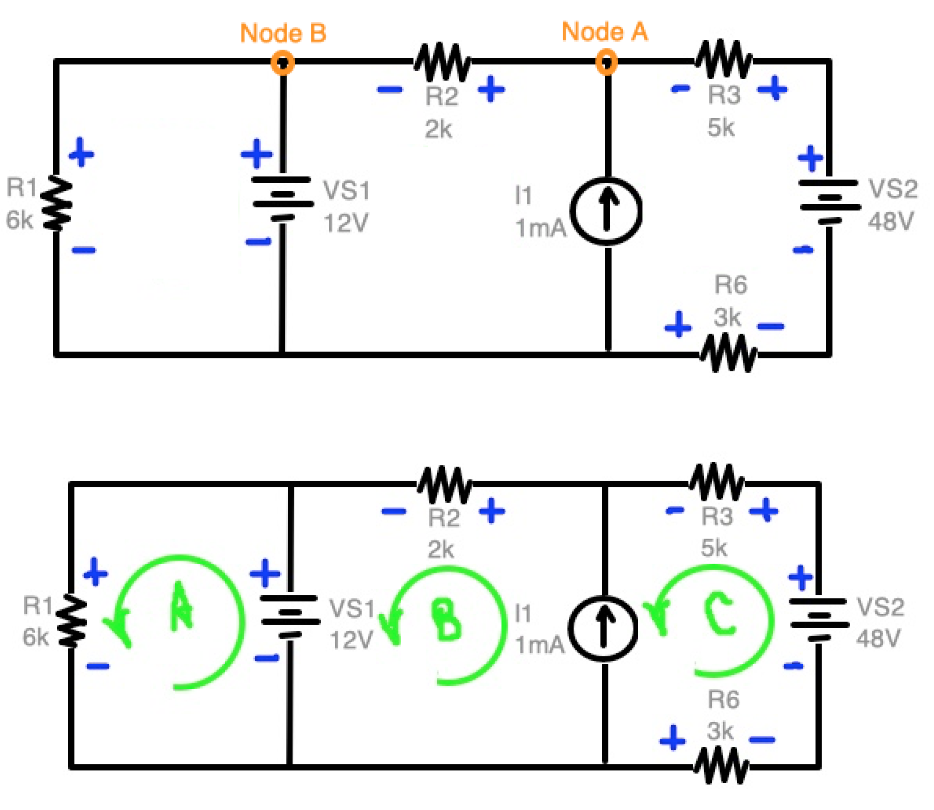 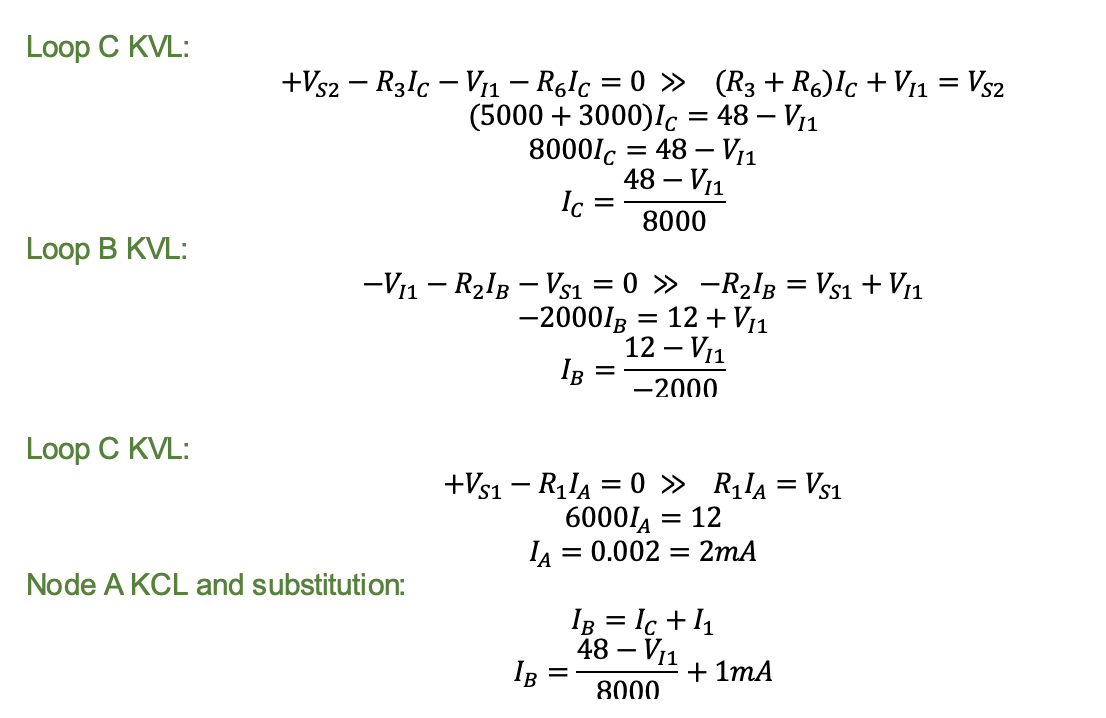 I then attempted to do node analysis thinking that I could find the nodes between R2/R3 and R1/R2 then do a simple Ohm's calculation (Va-Vb/R2 = I2). I've searched the forums for similar questions, which there definitely are...but I'm not understanding how to do this since the current source is not expressed in terms of another branch current or some voltage coefficient.

I appreciate any help steering me in the right direction.

The first thing you should notice is the \$R_1\$ resistor is connected directly in parallel with \$V_{S2}\$ voltage source.

All this means that we already know the \$I_A\$ current value.

And this current will have no effect on the remaining part of the circuit because the voltage at node \$B\$ is fixed and it is equal to \$12V\$. 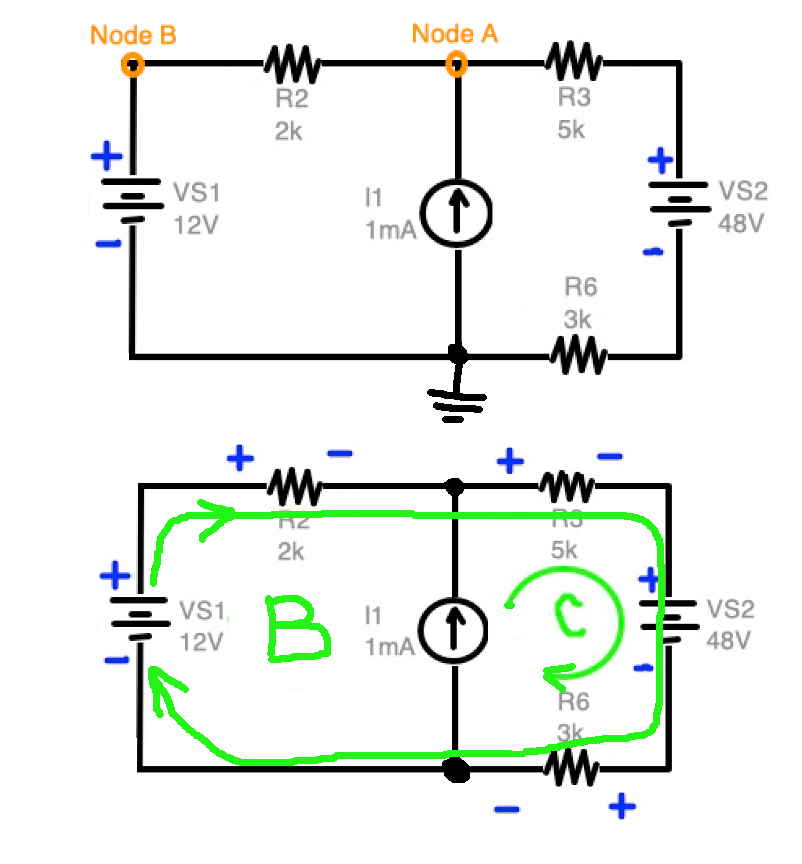 Solving this will give us the answer:

And this minus sign tells us the \$I_B\$ current is flowing in the opposite direction to the direction I have marked on the diagram.

We can do the nodal analysis also.

We know that the voltage at node B is equal to 12V. Hence the nodal equation for node A can look like this:

And we are done.

The circuit simplifies to the following schematic. Note what I did on the left side. I swapped the relative positions of \$V_2\$ and \$R_6\$ (which doesn't affect the current in \$R_2\$.) That's it for the left side below: 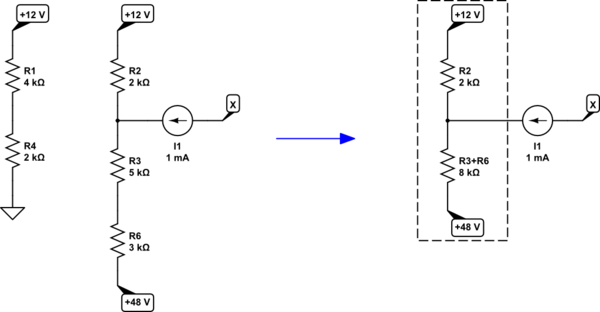 The right side is the simplified version of the remaining important part of the left side schematic. Here, you should be able to construct the Thevenin equivalent for the portion within the dashed box on the right side. Knowing \$V_\text{TH}\$ and \$R_\text{TH}\$ (representing that box), you can work out the node voltage quite easily. Knowing the node voltage, you can work out the current in \$R_2\$.

Given that enough time has gone by and G36 already provided an answer, I'll follow up now.

The circuit now reduces to:

You get to decide the sign, depending upon what the problem question is asking of you.

No time to draw nice schematics. Repeatedly applying Norton/Thévenin equivalents reduces the circuit to a single mesh. Here's the outline.

First get rid of R1, R4, as jonk said. They are in parallel to a voltage source and so they don't contribute at all.

Now the whole circuit has been reduced to a single mesh:

V1, R2, an 8k resistor and a voltage source of 56V (polarity going against V1 in the mesh). Apply direct KVL and you get for the unknown current Ix (assumed flowing leftwards):

Not the answer you're looking for? Browse other questions tagged current-source analysis mesh or ask your own question.