If I wanted to have a bias current I1 going through M1 or M2 and I want M1 to alternate between on off (M1 on/M2 off, M1 off/M2 on) would this work? I simulated this with spice and for the first cycle the nmoss have the bias current through one and none through the other but after the first cycle of the square wave they both have less than the bias current but not zero. What would I be doing wrong? And what configuration would I need to achieve the effect I am looking for? (Clocks go 0V-1.8V) 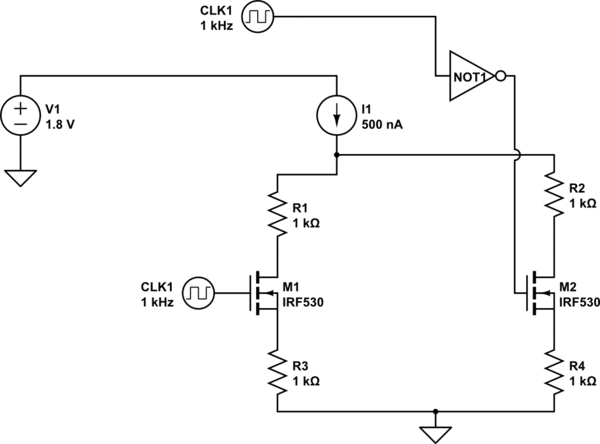 R3 and R4 are giving negative feedback which isn't letting M1 and M2 turn all the way on. It's operating as a linear device, not a switch. The more M1 or M2 turn on, the more current flows through R3, which increases the voltage at the source pin, which (because you are driving the gate with a voltage referenced to ground) decreases the difference in voltage between the gate and source pin which turns the MOSFET off more. An equilibrium is found. Negative feedback.

Swap positions of R3 with M1 and R4 with M2 so that the source pin is the same as ground so negative feedback does not happen. If this is not acceptable (maybe if R3 and R4 are loads and you need them referenced to ground for whatever reason), then use a floating gate drive so the gate voltage is referenced to the source pin voltage instead of ground.

You could also use a PMOSFET. However, just swapping out your NMOSFETs for PMOSFETs won't work because R1 and R2 will end up acting as negative feedback resistors just like R3 and R4 did with your NMOSFETs. So you will have to swap R1 and R2 with the positions of the PMOSFETs similar to swapping positions of R3 and R4 with the NMOSFETs, except in the case of the PMOSFETs R3 and R4 will remain referenced to ground which may be desirable for various reasons if they are your loads. Note that your gate drive for the PMOSFETs will have to change as well.