I have a Dewalt Metal cutting abrasive saw that tends to open a breaker on starting up. It draws 75A on startup tripping the magnetic part of the breaker and opening it.

This circuit is only to stop the breaker from opening during the inrush period when the saw blade is totally still. Once it is rotating inrush should be manageable and not as close to the breaker-open current.

The mechanism would essentially be trigger saw -> wait a second for rotation -> close light switch and get full power.

Are there any drawbacks to this approach? I don't think it could damage the saw, but I could be wrong.

I use the saw occasionally and wouldn't be doing a huge amount of repetitive cuts, so I don't see ohmic heating being much of an issue. 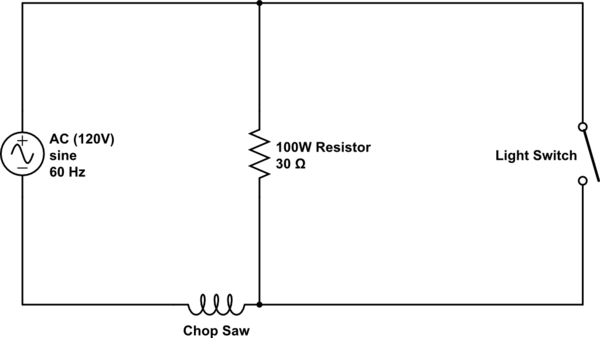 Given that it is a brushed motor, your idea should work. I would be tempted to put a light bulb in parallel with the resistor, to give you a visual indication that the saw has spun up.

(Note that the fact that it's a universal motor means that it's going to pull a lot of current on startup, or when it's stalled -- a too-fast circuit breaker would definitely pop).

If it trips the breaker 1 out of 5 times then this indicates that a zero-crossing Triac could prevent this. But that is not a cheap solution. A clever solution might be a ZCS triggered DC relay that switches exactly at 1 cycle later. But that may not reliable.

Just to throw this out there, the symptoms are also those of having too small of an extension cord feeding the saw. The cord is creating a voltage drop, which causes the universal motor on the saw to pull MORE current on start-up and it trips the breaker. Before messing with this by redesigning the saw circuit, go buy a heavier gauge extension cord and see if it fixes the problem.

Same problem with my Dewalt cutoff. I measured an instantaneous inrush current of 68 amps. I returned the saw to supplier, took more than a month for warranty repairs and problem was not fixed. Mine trips a 20 amp breaker on a dedicated circuit. Tried running the supply through the starter switch for a craftsman table saw (contains a capacitor) but didn't help. I've found however, that by giving the blade a slight spin before I pull the trigger I no longer trip the breaker. It seems as long as the abrasive blade isn't completely at a stop, the in rush is adequately reduced.

Not the answer you're looking for? Browse other questions tagged resistors ac resistance induction-motor inrush-current or ask your own question.