I am experiencing voltage drops with the following setup and I hope someone with mad electronics skills can explain my mistake to me:

When I boot this system up, the RasPi gets stuck in a boot loop. Which means the screen turns on for a couple of seconds and then the lights of the TFP401, as well as the screen, turn off and restart again. This setup draws around 0.7A, which should be no problem for the PowerBoost as well as the battery. If I only connect the RasPi without Display the system boots up, drawing around 0.2A.

I have researched this topic already and found the following post to describe almost the same problem. Unfortunately I don’t have an Oscillometer to see what is happening. The PowerBoost however features a LED light, that will light up if voltage drops below 3.2V.

In my first setup (all components) the light is almost constantly on, which indicates massive voltage drops. The second setup (only RasPi) does not show the LED most of the time. However, even there the LED will flicker for very short amounts of time.

Doing research on the battery I bought, I saw that it is rated for 0,3C continuous and 0,5C peak (which should still suffice for the test setup). My end goal is to have a continuous draw of around 1,4-1,6A, so I will probably have to get a battery with higher rating.

Again, can someone with electronics knowledge explain to me what is happening and how I can prevent this from happening?

I append two pictures. First, is the safety circuit of the battery. Second, is the wiring of my setup.

EDIT: Wow, thanks a lot for all the answers. I will need to take my time to go through all of them. One small thing I want to mention in my defence is, that the battery was supposed to have a 0,5C rating for continuous draw. I (wrongly) assumed that 2A would be sufficient for this setup. I did not take any loss due to conversion into account. It would be awesome if someone could post an answer that covers the basic math that is needed to calculate the losses for such a setup. 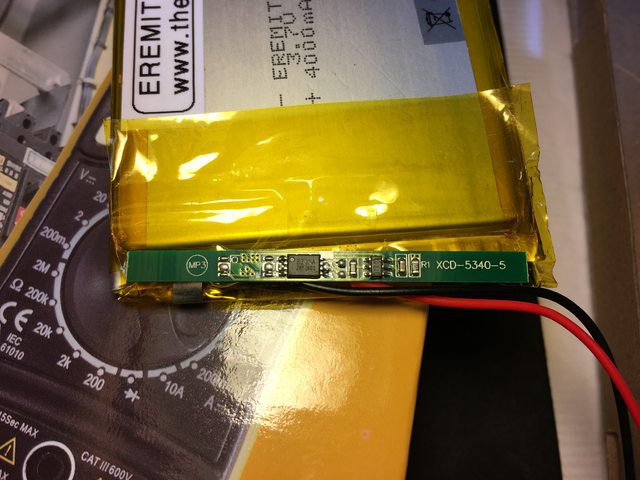 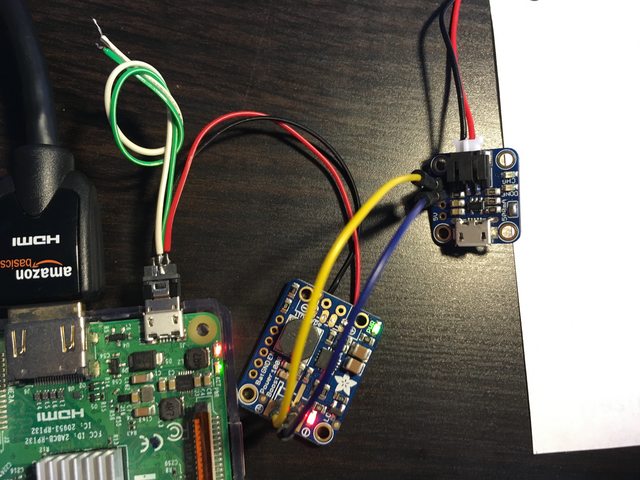 1) What is the rated output of the power boost?

2) What does just about every page about the pi ever written tell you a power supply needs to be rated?

Think about that for a minute and you will understand the problem.

Now, it is likely that the long term average power consumption of the pi alone is less than 1 amp at 5v, but digital systems have demand peaks, and those are where you are getting the brownout failures, and why all the resources tell you that a supply of higher current rating is needed. In theory, a solution which used a large capacitor might be able to sustain it through the demand peaks. But that's probably only applicable to a higher-rated DC/DC converter with a physically larger inductor having a higher saturation current. Your current converter is just too small.

And of course, the more you add to your pi, the more power you draw - without even reading your whole parts list, you have a display of non-trivial size the power demands of which will also need to be taken into account. And the same for everything else you are using.

At the end of the day, the Raspberry Pi just isn't a system that lends itself naturally to battery power - people try to make laptops and portable gadgets out of them because they are available, not because they are a good choice. There are known things you can do to reduce a pi's power consumption, but the SoC utilized was never intended for battery powered applications, but rather to go in a TV set top box where it has mains power. As such, it lacks the kind of low power sleep modes that a comparable-compute-capability SoC designed for tablet or mobile phone usage would have. And the operating systems and storage typically used when that chip is incorporated into a pi don't support the kind of fast turn-on/turn-off that would be needed to turn it on and off constantly in usage. Even if you find parts that make this work, you'll likely not get much runtime from the battery.

Don't listen to the answers/comments claiming that the issue is with your boost converter, as they're incorrect. Your boost converter is more than adequate, one only has to actually read the specs/datasheet to confirm this.

The boost converter you're using has a 4A switch capable of 4.5A surges, and is very efficient even under heavy load thanks to the synchronous rectification. And at 700kHz, the ripple current will be small and the needed inductance will be tiny, so the inductor is plenty large enough to handle 4A+ without saturating. And beyond that, Adafruit themselves specifically specify that converter as being able to handle 4A of input current in the description.

Now, the recommended peak current capability for a power supply that is going to power an Raspberry Pi 3 B+ is 2.5A. Can your boost converter provide as much as 2.5A at 5V? Let's ask Texas Instruments: 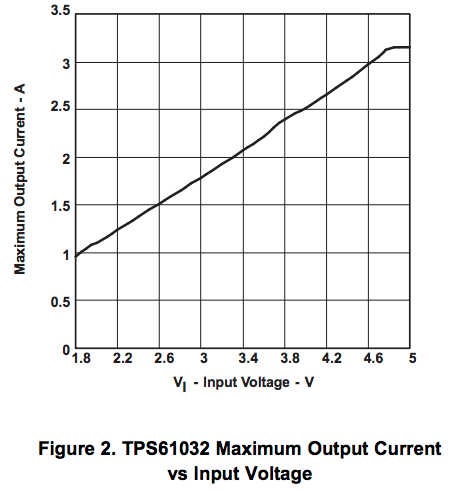 Yes. Yes it can. Granted, it needs a fairly stiff input voltage of ~3.9V, but this is well within it's capability. A 3.7V LiPo battery outputs an average of 3.7V. At full charge, its terminal voltage is 4.2V. Also note, this is continuous output current. The actual current draw of a Raspberry Pi B+ is considerably less, the 2.5A power supply is for a 'desktop' configuration, where the USB ports are providing downstream power to connected devices, etc.

Now, back to your problem, why is it boot looping? Well, the answer is because the power supply is inadequate - but the problem is your battery, not the boost converter.

The 3.2V warning LED already tells you all you need to know - the battery voltage is dropping below 3.2V. This happens due to its internal ESR, which acts like a resistive voltage drop, reducing the terminal voltage. The boost converter is quite potent, and is handily sucking out 4A+ from your battery, doing everything it can to boost the output up to 5V at over 10W, but as we can see from the earlier chart, the maximum output current at lower voltages falls off below what the RPI likely needs as surge current during boot up. This causes the boost converter's output voltage to fall, and the RPI doesn't get the voltage it needs, and starts to glitch. The result: an infinite boot loop.

Your battery needs to be able to tolerate 4A discharge current. You need a high-drain, low ESR type of LiPo battery, or simply a larger (physically and in terms of capacity) battery which can handle higher discharge currents with less terminal voltage drop. Keep in mind that you like won't be able to access all of your battery's capacity without a slightly beefier boost converter, but the one you're using is certainly enough to run off a LiPo cell at least while the voltage stays high enough - probably above 3.6V.

The battery you've selected is rated for a maximum of 0.5C discharge current, which is 2A. You're seeing such a huge voltage drop on your battery because you're trying to discharge it at twice the maximum discharge current. This is a potentially dangerous thing to do to a LiPo cell, and you're running the risk of sending it into thermal runaway and starting a pretty nasty fire. Do not continue attempting to use that LiPo cell in this application, and I would recommend you discontinue use of that specific cell completely - its possible that you've already damaged it internally, and it might fail unexpectedly at some later date. And by fail, I mean spectacularly with fire and lots of it. The electrolyte inside is volatile and flammable, the dangerous energy isn't the electrochemical energy in the cell - it's the energy resulting from burning flammable chemicals that tend to get ignited once they're exposed to the oxygen in the air that are normally sealed inside the cell. Just be careful.

All things considered, I would like to echo the sentiment of not powering an RPI from a battery at all. The Raspberry PIs are meant to be cheap but full-featured and practical. They are not designed to be low power, and have no power management capabilities, which is a large part of why they need such a stiff power supply. It is a very poor match for any sort of battery powered application. There are dozens of similar single board computers available that do have power management (allowing them to adjust their power consumption as input voltage falls by underclocking themselves, things like that). It's beyond the scope of this question to suggest an alternative, but a quick google search for 'battery powered sbc' already returned a lot of promising results.

Battery info: 0,3C continuous and 0,5C peak 4000mAh i.e. 1.2A continuous, 2A peak
Power Boost info: "provides at least 2000mA from a 3.7V LiPoly/LiIon battery or 3 NiMH/Alkalines. Just make sure your batteries can actually supply the required 2-4A, OK"

So you may experience > 2A peak to startup and then the battery voltage drops into an impedance runaway condition (see below) and low bat results in a low output. This is now in agreement with @metacollin

So a battery with up to 4A pk may be needed.

You can experiment with a 3.3V source instead of battery to isolate the fault. e.g. PC PSU.

The reasons why are explained below:

You are measuring voltage drop with a rise in current. This is the effective series resistance ESR that is also used to determine load regulation error voltage.

Efficiency can be estimated by the effective Rs of the converter determined with a perfect voltage source input of 3.3 say from a power supply with Rs=ΔV/ΔI.

Adding up these factors and comparing them may tell you the BATTERY is the weakest link or greatest contribution to load regulation error or effective series resistance with the multiplying factors of impedance ratio for battery load multiplying as the battery drops in voltage.

This like trying to start a car with a clutch pulling a trailer in 2nd gear and it stalls. One checks if the gear ratio is suitable ( Vin/out) and effects battery load regulation. As the input drops the impedance ratio from power convert increases 1/n² for a constant startup current from battery ESR.

This load error or effective Rs rises sharply when current limits are reached in the regulator. Soft starts or load sequential starts "might" be an option for power applied to minimize surges.

I agree that your cheap Chinese battery is lousy. I buy name-brand Li-PO batteries at my local hobby store (they are made to power model airplanes or drones) and their maximum allowed output current is at least 20C which is 80A!

Not the answer you're looking for? Browse other questions tagged raspberry-pi lithium-ion boost .