Repairing old computer, randomly reboots due to something is wrong with “reset” circuitry

Not long ago, I have done some capacitor repairs after experiencing random reboots. I've skimmed through some online manuals, and it seems that somewhere in the circuitry around the on/off switch is somehow correlated with the reset button. I replaced all the bad capacitors in this section of the motherboard in this picture I found online. 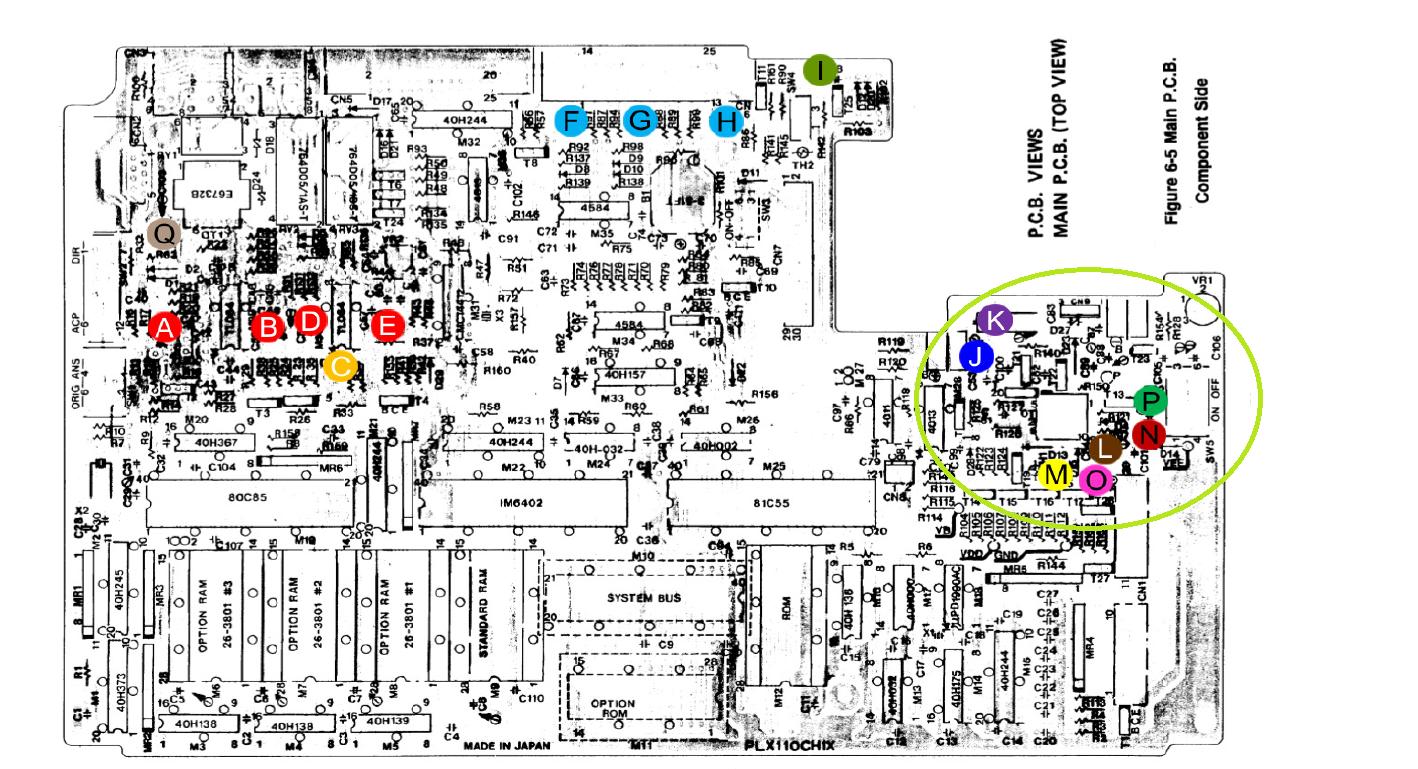 I've replaced all 10uF 16v capacitors that are used for the display. Recently, I had to replace B and D as it was a bad solder.

I've damaged the trace near b and d but was working just fine and it hasn't severed the trace completely.

I checked the other in the circled that wasn't mentioned above and they did not leak. Although I had to desolder them and put them back again. I made sure that working old capacitors were properly seated and connected through the solder. I even checked the non-polarized C, and it was not leaking so I had to re-solder it carefully.

I'm confused right now as what to do. All bad capacitors have been replaced.... I'm not sure why its doing this....

Works for a while then randomly reboots after entering the telecom. So which is why I checked the C capacitor (has to do with the modem?)

Somewhere in the service manual, it talks about a battery voltage detector. I suspect that since the capacitors in the circled area have gone bad is the culprit of the "reset." But I was mistaken. After replacing the bad capacitors I still was experiencing reset. So I decided I must have done an improper solder. I made certain that the solder sunk into the holes where the capacitors are supposed to be at and nothing but a black screen of death. I'm scratching my head right now. Did I short something by mistake?

Here is the service manual, look for page 50 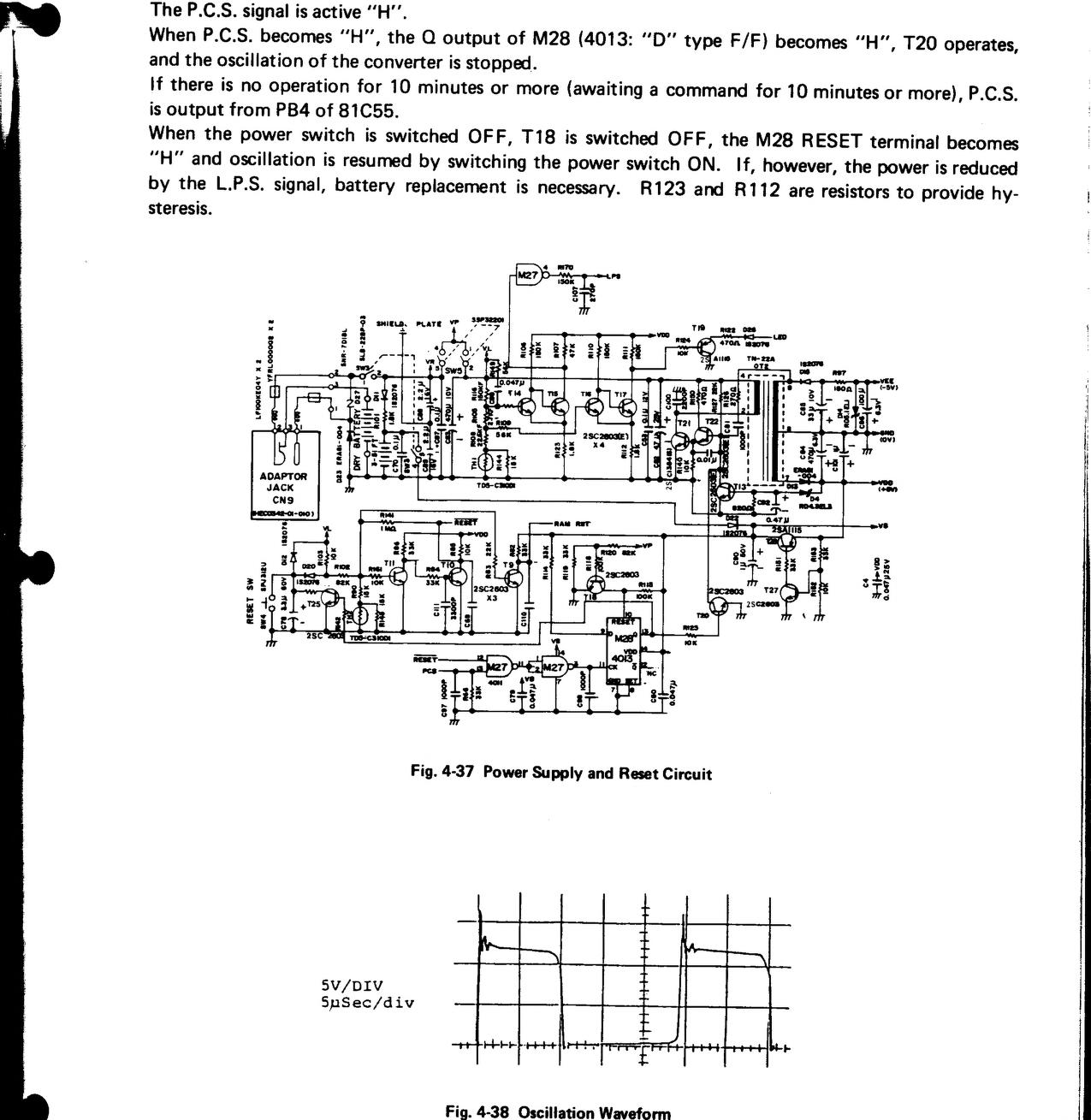 UPDATE: WHEN DESOLDERING ITS BEST TO USE A SOLDERING WICK. DAB SOME FLUX BEFORE STARTING.

Especially to safely make contact without scorching the board I had to dab some solder ontop of it. I've accidentally yanked out a few pads because of accidental scorching. So if you pulled pads, the copper plating would be on the top side of the board. Just scrape safely till there's copper around the holes and solder the capacitors on the top side. Be careful consistent heating will weaken the copper plating and can peel off when scraping with a screw-driver. Wire-glue should be able to fix any scraped off copper plating.

I also found out that the old nicad battery that was pre-installed on the board doesn't hold charge at factory capacity. As a result it drains fresh batteries in a week if you leave it off. For anyone who encounters future problems replacing the battery should be the first thing to do so that you're not de-soldering, re-cleaning, re-scraping and re-soldering everything. And that new pack of batteries is dead.

Altogether, the problem was scorch interfering with the conductivity and the old nicad battery draining a new pack of batteries in a week. And of course pulled pads. Just de-solder all the capacitors carefully and clean out the holes thoroughly with rubbing alcohol. If you haven't replaced the nicad battery just make sure you remove the batteries when you're done. 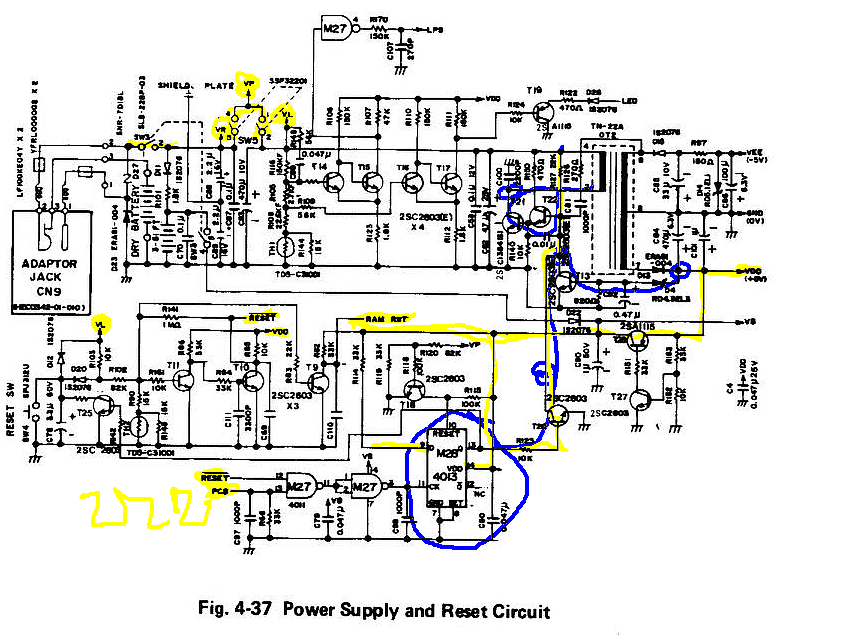 Thanks Sunnyskyguy EE75 for the edited schematic. It indeed was something wrong with the reset circuitry. It helped me find out that the scorch was partially responsible for constant rebooting.

Not the answer you're looking for? Browse other questions tagged digital-logic soldering or ask your own question.

30
How were schematics drawn before CAD?
8
Can I use a higher voltage rating when replacing capacitors?

24
How to clean my soldering iron tip or how to determine that it's beyond repair?
2
How to identify solder
16
Can anybody identify this component (SPRAGUE 663044-4) on this vintage electronic?
3
ENIG or HASL for prototype with small pitch and expectation to need rework
0
Desoldering a TO-220 MOSFET from a plated through-hole board with SMD complications
0
NOR Gate is Working Correctly with Vcc Pin Disconnected
0
Solder joint only working while solder is still liquid
0
Beginner soldering help - solder balls/doesn't liquefy and soldering tips blacken