This SR latch built with 180nm CMOS does not work in ltspice. How do I fix its behavior and parameters?

EDIT: I copied over the latch from another larger model that had Vdd defined, but missed it when copying over the design. However, after adding in Vdd, I still run into this confusing issue where the R seems to trigger Q and not S.

I used these 180nm mosfets to build this SR latch:

I used the nmos4 and pmos4 and added a spice directive with the models. I sized the nmos as L = .18um and W = .5u and the PMOS as L= .18u and W=1u (to get more symmetrical rise fall time, though Im not sure by what factor exactly I would need to scale the width): 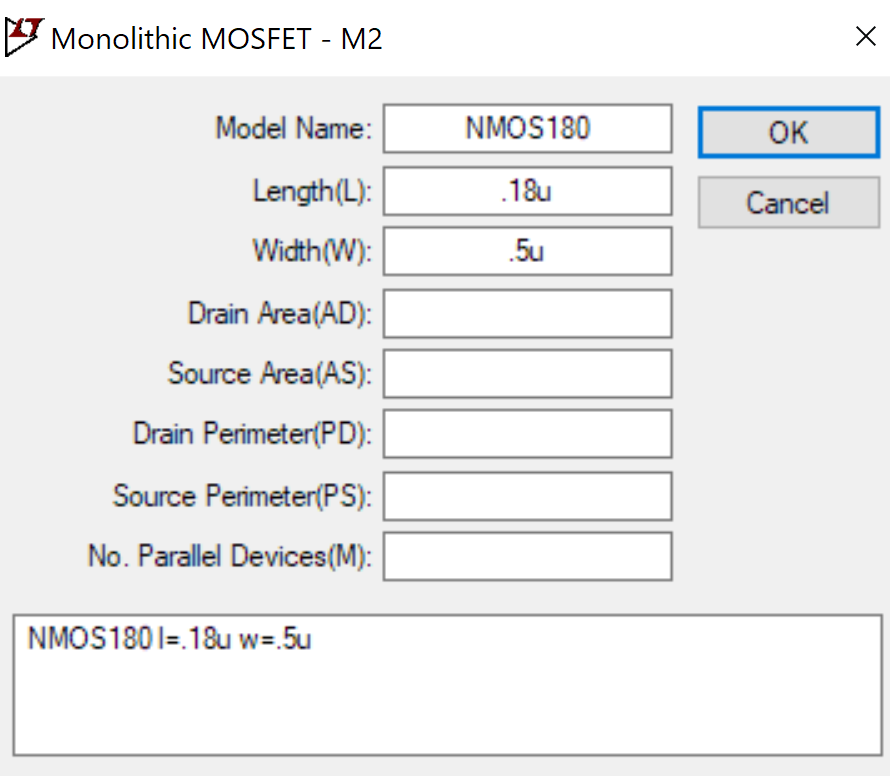 However, even though I followed a regular schematic for an SR latch it does not work. When the S and R are triggered it seems that R triggers Q and not S. Then again, not all the parameters are recognized by ltspice and Im not sure how to get around that other than by using another transistor. Is there a way to make this current design work? Also, any chance someone could let me know if the warnings I am seeing are a clear need to fix a particular thing in the circuit?

I don’t see a power source providing Vdd in your schematic. How would you expect that to work?

The spikes you see are just capacitive coupling.

Also, you mislabeled your nodes. Q and Qb are reversed.

Not the answer you're looking for? Browse other questions tagged mosfet circuit-analysis digital-logic ltspice cmos or ask your own question.

2
CMOS Inverter Equal Rise and Fall Times
0
How does this circuit work?
0
How does this CMOS OTA with common-mode feedback work?
5
How to fix this LTspice error
0
Does LTSPICE automatically include avalanche parameters in its power dissipation measurements?
2
LTspice - Create a subcircuit and modify its own parameters
1
Op Amp design - open loop gain 73dB, closed loop gain -200dB