Ask Question
Asked 10 months ago
Active 10 months ago
Viewed 75 times
-4
\$\begingroup\$
Closed. This question is off-topic. It is not currently accepting answers.

I've been trying to start solving the circuit for a long time now, but I've no idea where to begin, what node should be grounded. Someone please solve this circuit ina detailed manner 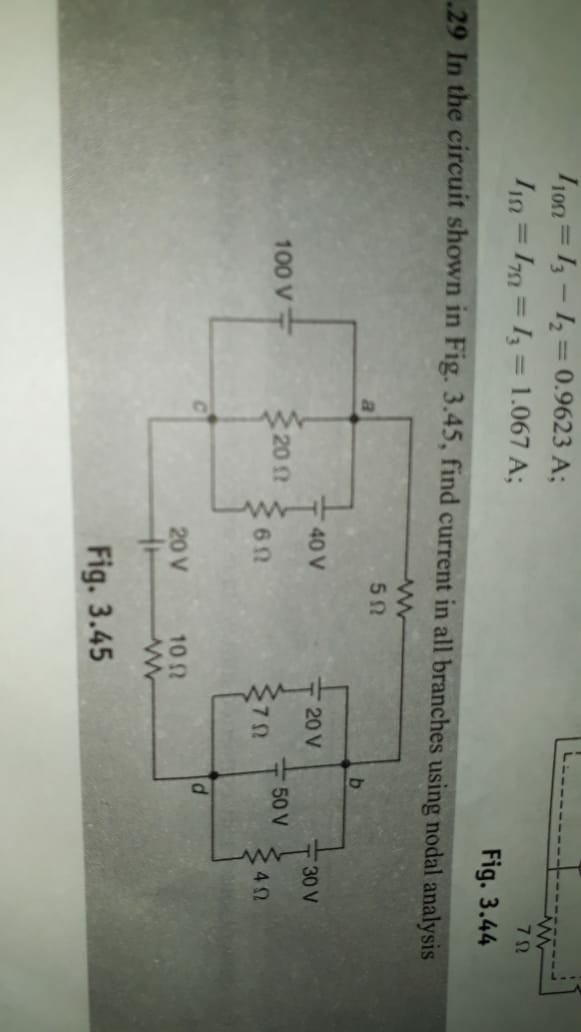 There are convenient places to make such assignments. But no bright line reasons to choose one over another. You can move the ground assignment to anywhere you please and the important features of the analysis results will be the same.

You also don't have to assign that node to \$0\:\text{V}\$. You can assign exactly one node to any arbitrary value you want. For example, you could pick one node and call it \$1000\:\text{V}\$. The value doesn't matter (except people might wonder about you.)

Whether you choose to assign \$0\:\text{V}\$ or \$1000\:\text{V}\$ to one node, or which node you assign it to, is your business. Only the absolute values for the nodes will be different. Their relative values won't change, no matter the node you pick and no matter the value.

If the textbook or teacher doesn't give you any guidance about what they are looking for, you are free to make your own choices. (And as of the time I'm writing here, I don't see where you've indicated such guidance -- in fact, you seem completely adrift about it.)

[When developing schematics for others, a well-chosen ground can matter a lot in making a more readable schematic. And there are many good physical reasons for a specific choice (compatibility with other designs, safety, etc.)]

But if only for analysis, and given examples like yours, I tend to use \$0\:\text{V}\$ and tend to select the node which as the largest number of devices attached to it because it helps reduce the remaining algebra to do.

I'd just choose node \$d\$ as ground. This is because all of the nodes have the same number of connections and \$d\$ has a nice voltage source attached to it. For that reason alone, I'd guess it would help me simplify the analysis. So here's how I'd redraw the circuit for the purposes of assigning ground to \$d\$ without radical changes, otherwise: 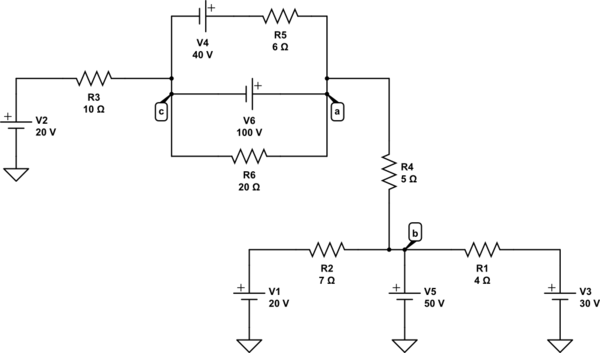 I'm now going to redraw the schematic somewhat more radically. It's still the same. But it will make it a lot easier to understand. (If interested in a few useful rules about redrawing schematics, please read here.)

(Learn the art of redrawing schematics for readability and simplicity. There are still more simplifications to the above example yet to do.)

The above schematic should make it easier to get started on analyzing it. You are down to just two nodes (or three, if you count the unnamed one between \$V_4\$ and \$R_5\$) to analyze using nodal analysis. And it is pretty obvious that if you solve for \$c\$ then you know that \$a\$ is a fixed voltage above it.

If all you need to do is work out the currents in the resistors, you could further simplify the above schematic. Trivial, now.

Let's go through each resistor to see how the above was produced.

From the earlier diagram, we had a pair of voltage sources on either end of \$R_1\$ and \$R_2\$. So those are easy. Just take the smaller of the two voltages and subtract that value from both ends. One end becomes \$0\:\text{V}\$ after the subtraction and the other end gets reduced to the values you see. So that takes care of how I achieved \$R_1\$ and \$R_2\$ in this final schematic.

Not the answer you're looking for? Browse other questions tagged circuit-analysis kirchhoffs-laws nodal-analysis or ask your own question.

30
How were schematics drawn before CAD?