I have an issue with a charge circuit for a capacitor as load.

I want to switch approximately 400 V DC to charge a 1000 µF 600 V capacitor. I'm using a power MOSFET for this application. I need it to charge instantly as soon as it turns on, or in a few milliseconds. The problem is that to do that I saturate the MOSFET and then turn it off using a 10 V signal to gate source to drive the MOSFET.

It works the first time, as soon as I send the signal it charges, but the problem is that the capacitor gets damaged and all the terminals get shorted. The MOSFET is a IRFP460, it is a 500 V, 20 A and 0.27 ohm MOSFET. I choose it, because it seems to be the correct for this application. I put a 10 A fuse next to the MOSFET to verify if it was being damaged by some inrush current, but it wasn't because as soon as I turned on the MOSFET the fuse didn't pop and the current I measured was not above 5.5 A, and the MOSFET broke down anyway.

The only thing that could be causing the problem is the commutation therefore, the problem must be in gate-source or the driving part. Another thing that called my attention is that if I apply almost 8 V to gate-source the capacitor charges, but only to a half of the voltage with a single pulse of a button, and the MOSFET does not suffer any damage.

The driving signal for the MOSFET will be a pulse that can go from 55 ms to 1 second. So it has to charge the capacitor within these times too. I looked for snubber circuits that can handle this, but the ones I found were parallel to the MOSFET and would get 400 V as soon as the power supply is connected, so I would need components to deal with this and I don't have them. Even if I would get them I don't know if it would work.

This circuit will have another part to discharge the capacitor, but first I need the charge to work. I would like to know if I can implement some kind of snubber for gate-source or what can I do to avoid damaging the MOSFET and switching the voltage needed.

I think the MOSFET could be leaving the safe operating area (SOA) when switching. I also tried to put a diode with a parallel resistor on gate, but no results. How can I do this?

This is my circuit: 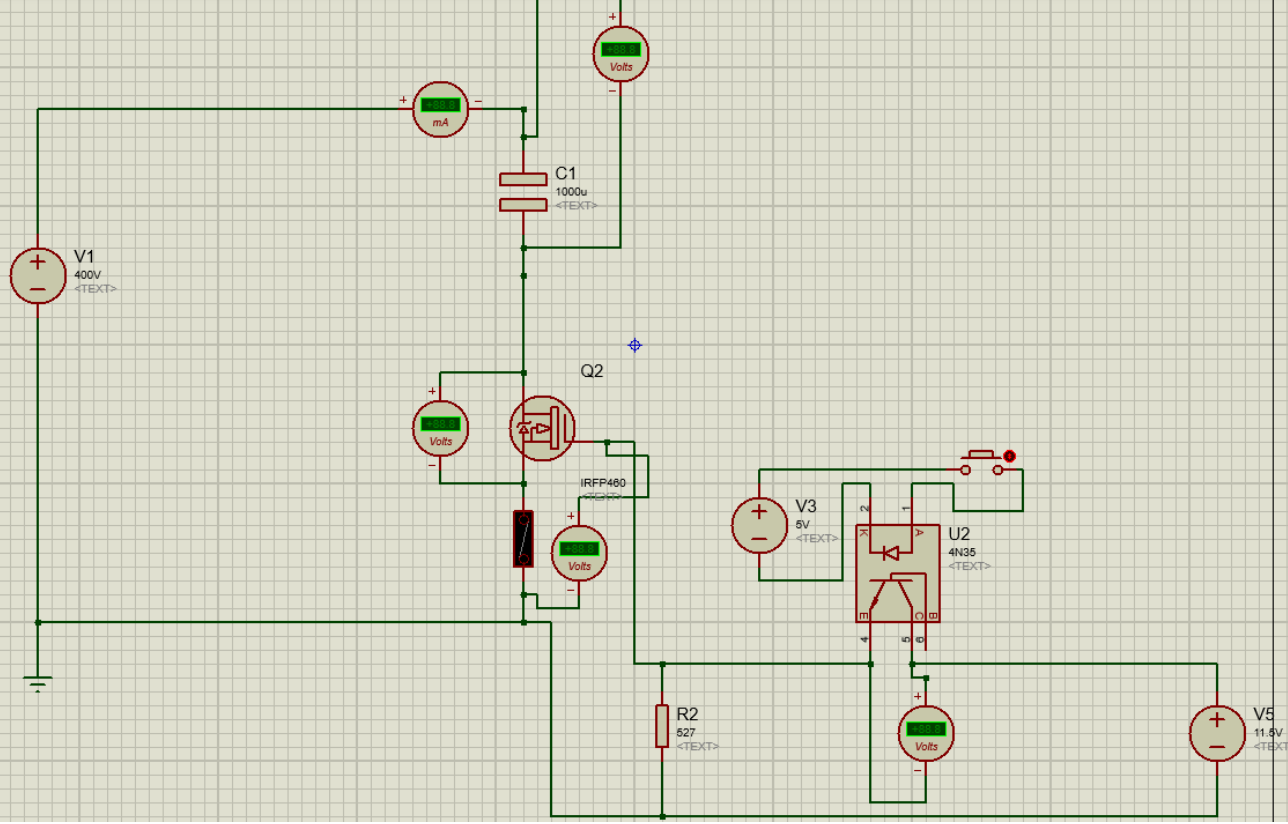 Sunnyskyguy-ee75 gives you a really good answer regarding the power problem. Ultimately, I believe you will need to consider the problem you are trying to solve. Either generate a lot of heat by charging the cap quickly with a high current (Warning caps will self heat, Al electrolytic in particular, and can be destroyed by too much current). Or increase the charging time and generate less heat.

Maybe a non-linear solution is best:

Most power MOSFETs are designed to act as switches (in switching power converters for example). They can stand off the rated Vds when off. When turned on the NFET pulls its drain down to its source quickly, typically faster than 1 us.

The power MOSFET is designed to be the lowest impedance looking into the node. In your situation the capacitor is the lowest (AC) impedance.

There are MOSFETs called Linear FETs that are intended more for this type of operation. A linear FET has an expanded SOA, a lower gm, and typically a higher Ron than other similar switching power FETs. IXYS (now Littelfuse) has a selection here: N-Channel Linear Power MOSFETs.

The worst-case FET safe operating area (SOA) must be observed. 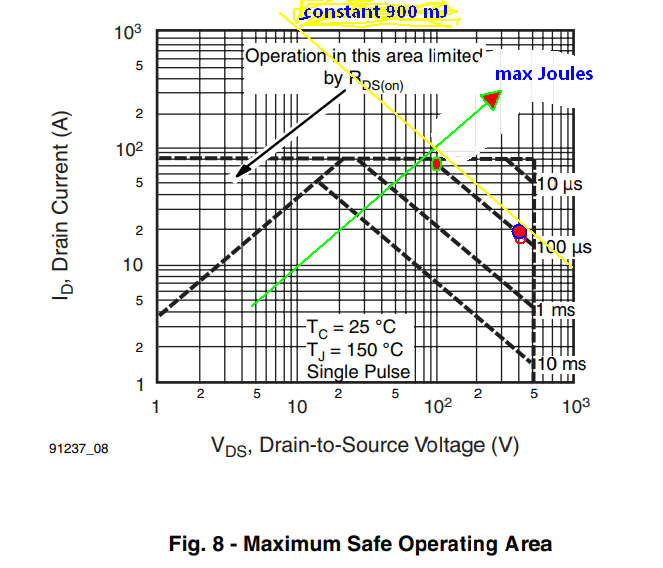 So a much bigger FET is needed with a lower RdsOn in the 10 mΩ range, I suspect. I doubt if the supply or capacitor can handle a steady diet of these pulses, so it is back to the drawing board. The term "instantly" needs to be specified and relaxed with a current limiter.

The short circuit current on the capacitor is about 4000 amperes at 400 V.

"Houston, I think we have a problem"

Actual simulation below (not with an ideal Voltage source the Battery supplies a peak of 441 MW with a 362 ps time constant. ( ideal battery is not possible) 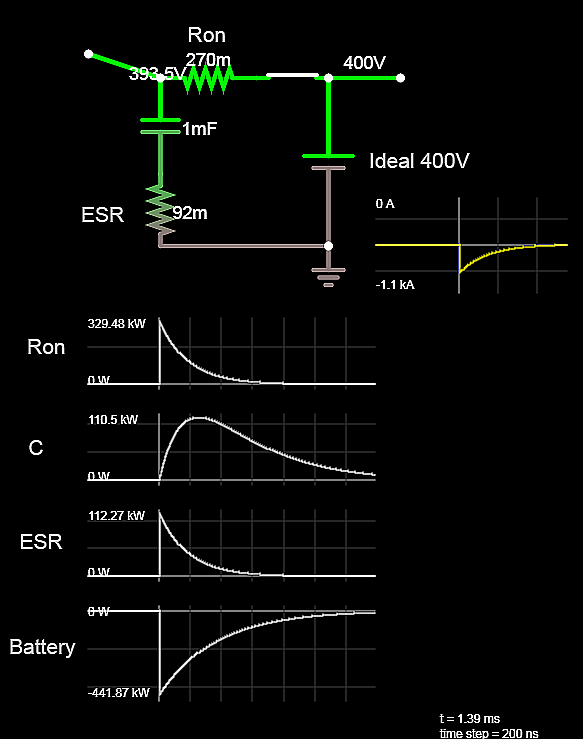 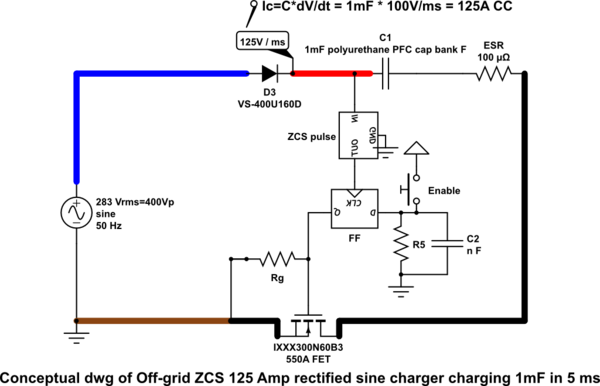 This is Houston. We think we have a solution. 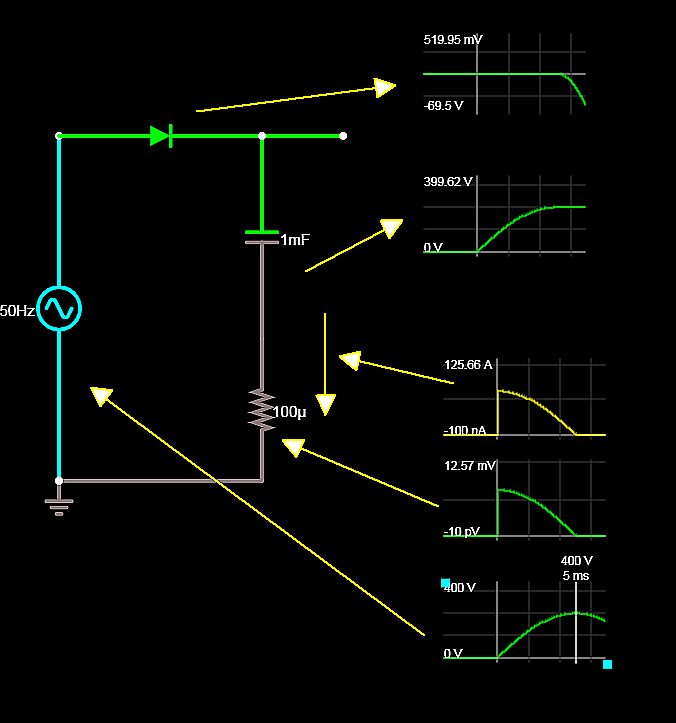 Not the answer you're looking for? Browse other questions tagged mosfet switch-mode-power-supply power-electronics switching powermosfet or ask your own question.