To Do: Use wall socket (AC) to run DC led strip and also turn it on/off with MOSFET and arduino.

AC to DC is done with rectifier and transformer. So this part is excluded from the diagram. 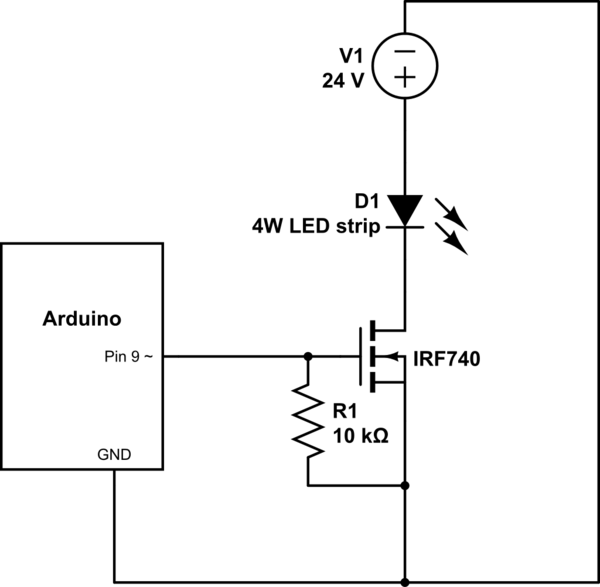 When I send a LOW signal to Gate, the led strip is still faintly on. I have read about why does this happen(stackexchange link)

What I was wondering is how can I stop this? Will a diode help? Is a MOSFET driver what it needs? Or should I increase the load (a pretty bad hack)?

I know the mosfet in use is not a TTL but the mosfet does turn on at low gate voltages (1.5~2V). I am able to fade the led strip but could not get it to completely turn off using the MOSFET.

Also, not sure if this is a concern or not, but the supply voltage (24v) decreases to 18v when the MOSFET is turned 'off'.

Any help is appreciated. Thank you.

To solve the issue that the LEDs are still glowing when they should be off I would try this: 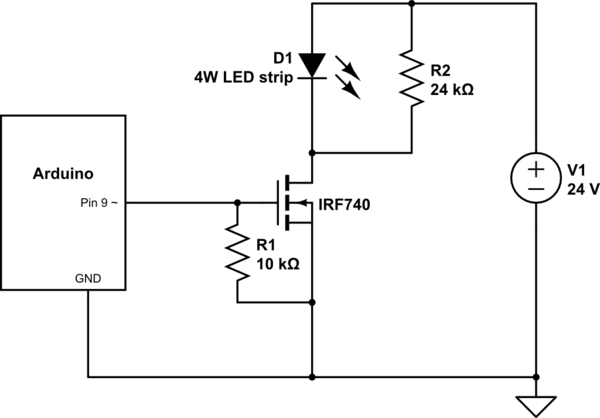 I tidied up your schematic a bit by moving the supply to be more "what we're used to" and adding a ground symbol. But the main fix is R2. Indeed the leakage current of the MOSFET will probably be the issue. You could use a "better" (less leaky) MOSFET but there might be a simpler solution. If only we can provide a path for that leakage current that is such that the voltage will be too low for the LEDs to conduct the current. That path is provided by R2.

The disadvantage of adding R2 is that when the MOSFET conducts, there will be 24 V across R2 so some current will flow through it (1 mA) which is "lost" as it does not flow through the LEDs. But 1 mA isn't much so compared to the 167 mA of the LEDs.

Try R2 = 24 kohm first, if the LEDs still aren't off, try 10 kohm. If that still in not low enough then maybe your MOSFET is damaged.

I have the same issue with my motion detector.I replaced the main IC but no luck. I replaced the FET that drives the array of LED with transistor and it works fine. FET is only good for relay or filament bulb, but not on a low current LED's