How to efficiently trigger QC and convert it to constant 5V and a peak of 5A?

For a university project I started working on RGB LED Shutter glasses, which are based on the idea of a kickstarter by Macetech. However, these glasses miss some features I was looking for and therefore seemed a good idea to improve upon. Also, they are pretty expensive and most components were given by my university so I was very glad my idea was chosen for the project. That said, our project goal was pretty simple: reverse engineer these glasses and make them react to sound.

However, during the project I stumbled on some pretty cool other use cases for these glasses and therefore decided to develop it further in my free time. However, our prototype is very rough. The LED's are on a pcb which is taped on some 3d glasses and a four threaded wire is connecting the LED pcb to the microcontroller. Not quite nice looking...

Since I want to use these glasses for myself (and wearing them at festivals), I want to make them look more professional. So I'm planning to create a 3D design which is bulkier than normal glasses but doesn't look stupidly big. This means all my electronics (except power) must fit in a small case in the glasses itself. For that, the legs of the glasses seem the best idea, especially if only one leg is used. This volume is approx. 4x6x1 cm.

The electrical components for in the glasses' legs are:

Therefore I'm looking for a way to get quite a lot of power to these glasses. The WS2812B I'm using has a max current of 60mA per LED, of which I have 72 which accounts for 4.32A. Normally these leds function on 5V, but they also seem to do fine on a bit less (li-ion voltage of 3.7-4.2V). So in the worst case they can suck 21.6W. Later on, I'm also planning on increasing to more leds while still maintaining the same surface. So for that I will be using the sk6812 mini, which I'm able to squeeze 100 leds on a new verion of the pcb. This will account for 50mA per led, which is at peak 25W.

Since I like to reuse the whole power design, I'm looking for a way to get constant 5V, max 5A. The way which seemed the most ideal to me was using a powerbank which has quick charge. To trigger this I could use a qc trigger board (as suggested here) and then step the voltage down to the desired 5V 5A. However these two boards are pretty large and certainly won't fit in my glasses.

I also found it's pretty simple to trigger qc, but since I don't want to waste power pulling a constant 12V doesn't seem like a good idea.

Last thing was that I saw a usb c qc trigger board on aliexpress, but these boards are very expensive.

So I'm interested, how I can efficiently pull power from a QC power bank and step it down to a constant 5V and a max 5A, while maintaining a small size?

I'm looking for a small circuit which can trigger QC and convert it to a constant 5V and a peak of 5A. How can I achieve this? Also, other options are welcome as well.

Earlier on, I said that I wanted more features from my LED glasses and will tell here more about that.

My glasses are currently able to display approx. 30 cool presets, but I have quite a lot of others in the making. Some of these presets have quite a lot of customizability, like setting a color (or on some a palette), showing different forms or reacting to sound or not. I also can show text and adress a certain letter with a color. And last but not least, it sort of works with ARTNET (recieves data, atm doesn't tell it's an ARTNET device). Also, I like to make an app which can control a certain preset and configure all the different options of it.

The way I solved this in the original macetech RGB Shades:

Full power is too much, cap it in software

It turns out that running 12-15 watts of LEDs on your face is too much. I have customers asking me frequently for reduced brightness levels, even though the stock RGB Shades firmware ships with brightness capped to 1/3rd of the maximum brightness (with 5 adjustable levels reducing the cap to less than 1/10th the possible brightness).

If you're in a darkened room, even 1/10th brightness over 68x3 = 204 LEDs can be quite blinding. Running them at maximum brightness also can cause the panel to get hot to the touch and physically uncomfortable.

By shipping the shades with brightness capped in software, they run fine from a normal pocket-sized USB power bank. Customers still want it dimmer, so there is no need for a high-current supply. Designing for maximum LED output is a distraction in this application, you will find yourself looking for ways to reduce the current, not increase it.

Much of the audio-specific design process is captured here, if you need additional information (and OSHW design files): http://www.macetech.com/blog/node/144

Skipping all exciting details, the question boils down to how to make a portable power with 5 V 5 A output (25W).

First variant, QC (v3 and v4) can output 4.6 A at any voltage level. And the 5V is the starting default. Therefore, to get 4.6A you don't need to have any "trigger" at all, provided that the QC source is designed and is capable to deliver this amount of current. Not all banks/adapters can do this, especially the ones that use standard Type-A port for output, and then use off-the-shelf cables (because a normal Type-A connector can't carry 5A). You need an adapter with "captive cable" of proper ampacity.

Second, if a "power bank" has advanced QC and enough total power, you can indeed "trigger" the high-voltage higher power mode (9V, 12V etc.). Once you "trigger" this level , the task is trivial - it is to convert the 12 V into 5 V 5A using a buck switching converter. Actually, the 5 A output level level is not completely trivial, and can't be done in "small size", typical power density is no less than 3-4 cm3 per 1W, so you are looking at about 90 cm3 volume space. 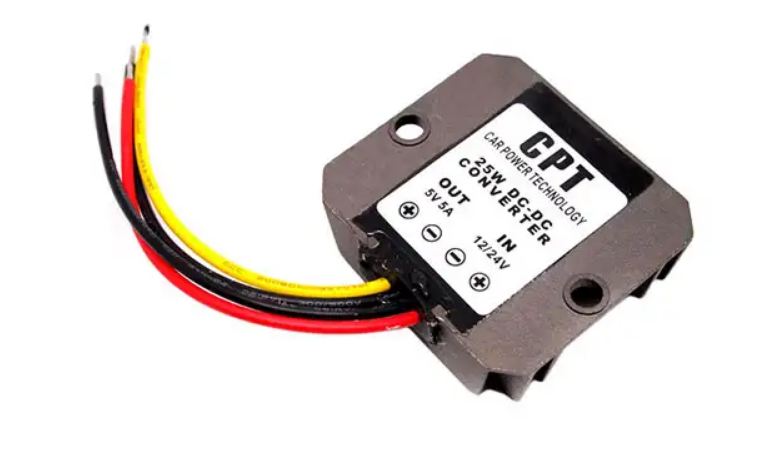 Alternatively you can design your own battery-powered supply (power bank) with desired output. It will take likely a battery of Li-Ion cells, balanced charger, and DC-DC converter to 5V whatever amperage. The first "standard" way seems to be the "more effective".

Not the answer you're looking for? Browse other questions tagged usb dc charging 5v step-down or ask your own question.