We are iterating a device whose metal chassis is internally connected to an ESD guard ring that is connected to the PCB signal ground through a 0Ohm resistor in a single point close to the power connector (image A). It also has two USB connectors and one RJ45 connector with their chassis connected to this guard ring. Everything has worked very well with this device.

Since the SMA connectors have a metal body, if we connect them directly to signal ground they will be grounding the metal chassis of the device. 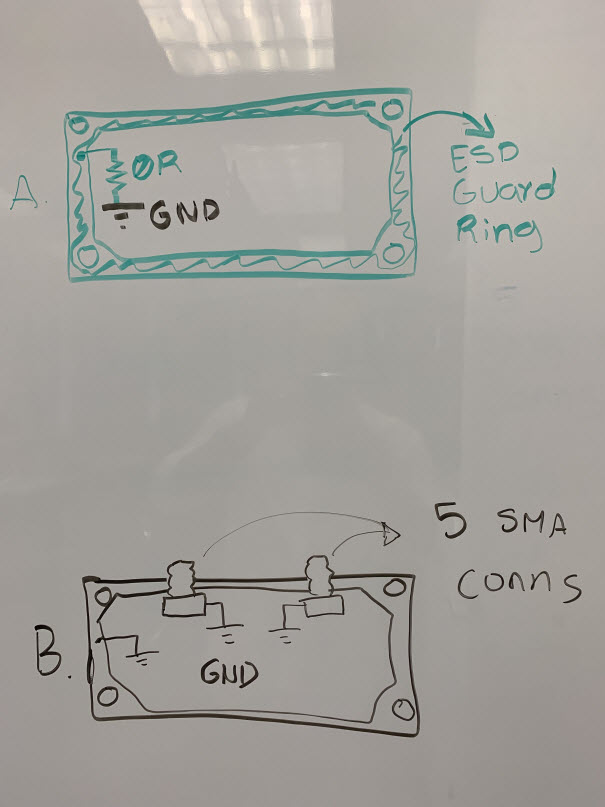 There is a choice here, and it depends on what you want most. If the signal of the SMA connector needs to be impedance controlled (like high frequency RF) then don't separate the planes. A way to tell if would be to ask yourself this question: Would cutting the shield (somewhere on the cable that goes to the SMA connector) and inserting an 0.1Ω resistor affect your signal (0.1Ω would probably be similar or worst case to the impedance between chassis and signal ground). If it would then don't tie the shield to the chassis, go to the PCB signal ground.

If the signal isn't affected by impedance, and ESD is the major concern then tie the SMA shield to the chassis ground.

PCB's can have two grounds, there are many boards that I've built that have a chassis ground solely for ESD events which I've attached shield's to. In some cases I've even used a fastener for the PCB chassis ground. If an ESD event hit's the shield, the current from ESD goes out down through the fastener and returns through the chassis. (away from sensitive electronics). If there are two grounds, make sure there is clearance between the two grounds on the PCB

Not the answer you're looking for? Browse other questions tagged pcb grounding esd or ask your own question.