How to Amplify Thermocouples (and DC sensors between 1mV and 1µV DC)?

This is a bad idea, I know

Here's what I know about amplifying really tiny DC voltages:

These are all acceptable to me. I want to learn how to do it anyway.

I've just started self-teaching and I thought that measuring the actual temperature in my toaster oven with what I have laying around (batteries, resistors, thermocouples, resistors, and op amps) would be a fairly simple and easy first project to design myself. Maybe I'm wrong, but I believe it's possible and I want to learn how.

At first I thought that perhaps I could use series of transistors, but since there's no current (and the voltage is well below the minimum necessary), that was a bust.

I remembered reading and hearing about op amps, so I thought perhaps that might be the right tool for the job. I watched Dave Jone's excellent EEVblog #600 - OpAmps Tutorial - What is an Operational Amplifier? and that I'd give it a try.

The local university has a plentiful supply LF347-N in a vending machine on the 4th floor of their college of EE, so I grabbed a few of those.

I was able to get a 10 µF capacitor to hold < 1V of charge (tapping to the 9v with a resistor and then draining with a resistor while measuring) and then created the suggested non-inverted feedback loop with each of a 5k1 and 2k resistor on a breadboard with a 9v battery and see the expected 3.55v (1 + RF/R1). It seemed that the op amp was actually charging the cap, despite the no-in/no-out "guideline". Or it was just increasing from residual voltage as it settled. 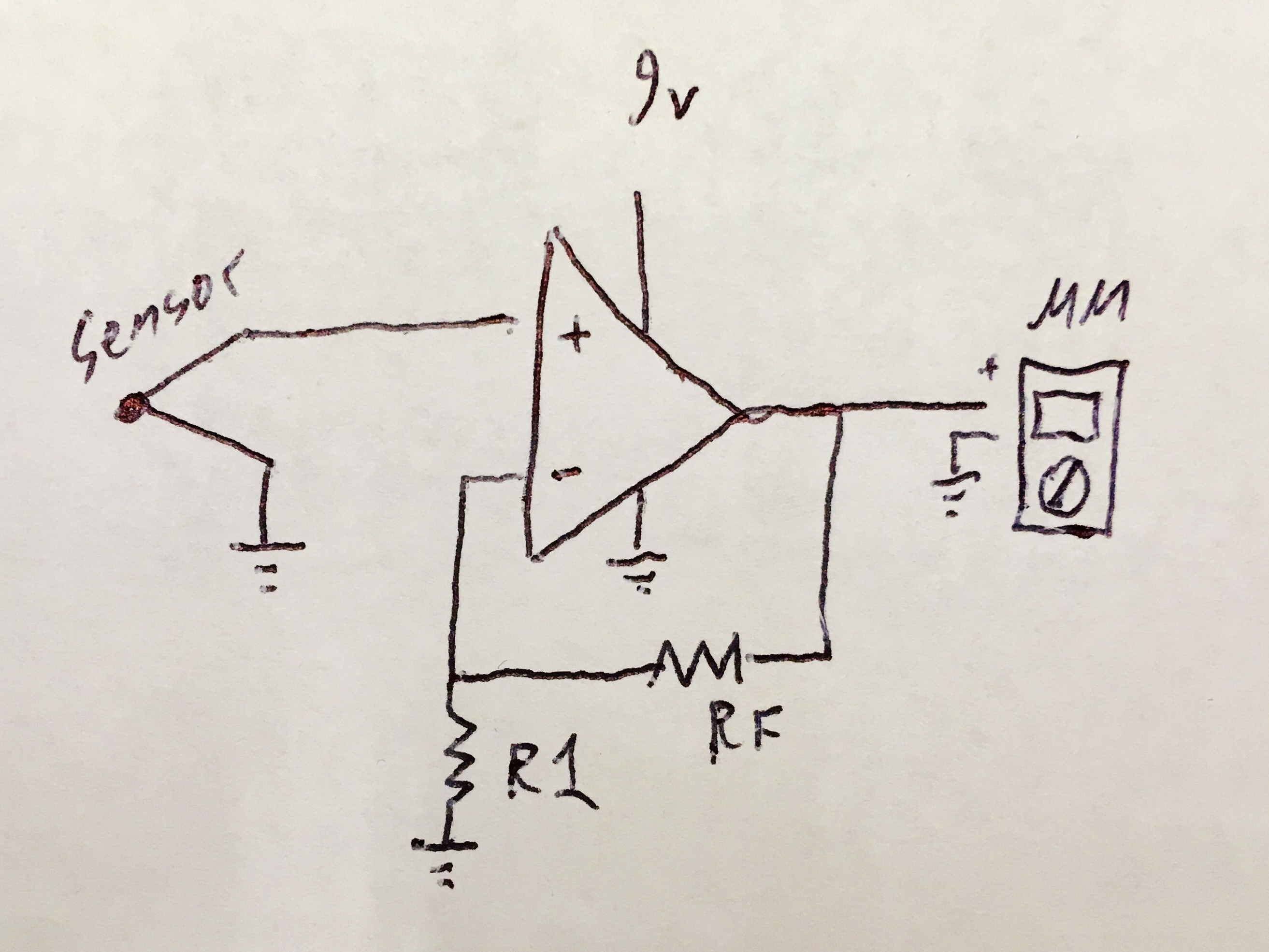 (only using one for now with the basic "non-inverting feedback loop" for now, but considering trying the "instrumentational amplifier" or "two op amp inamp" next time)

Cool, I think I'm on the right path now.

... and I could smell the Magic Smoke! Hot resistors. Hot op amp. I don't think it works anymore. I still get some readings, but they seem off and I don't trust it.

Tried a second time, similar result (gotta go back to that vending machine). At various points as I was experimenting I even tried touching my hot soldering iron to the tip, but never saw a response different from holding it with my finger through the op amp output.

I'm not ready to give up and use more specialized components like the MAX31855, LT1025 and LTC1049. I want to bang my head against this with "basic" components a little longer.

What else does a noob like me need to know to get on the right path? How might you go about this? What might I be missing?

With a better op-amp and dual supplies you can get useful results, though you'll have to supply cold junction compensation in some manner (for example by measuring the temperature where the thermocouple metals are attached to copper) and compensating digitally, if you want decent accuracy.

Not the answer you're looking for? Browse other questions tagged operational-amplifier analog thermocouple or ask your own question.

6
Regarding slew rates, what would be the minimum for amplifying audio using an op-amp?
8
How do I protect analog circuit from relay switching noise?
4
Economical thermocouple amplifier circuit
0
Problems with op amp thermocouple circuit
0
3D printer thermocouple noise issues
0
Sensing voltage with respect to virtual ground
0
Transimpedance Amplifier Troubleshooting
0
Beginner question about OP AMP as "DC differential amplifier". Does switching inputs between + and - make any difference?