Interesting (maybe?) question here which I am struggling to answer. Hoping someone can help.

I have a capacitor network; 5 caps in parallel and then two modules of that configuration connected in series. I am measuring the voltage of the bottom 5 caps using an Arduino Nano. The Arduino and cap network are only linked by the cap negative (gnd) connected to the Arduino GND pin. A bit crude but means I can measure negative voltages (i.e. 0V registers as 3V3 on the Nano): 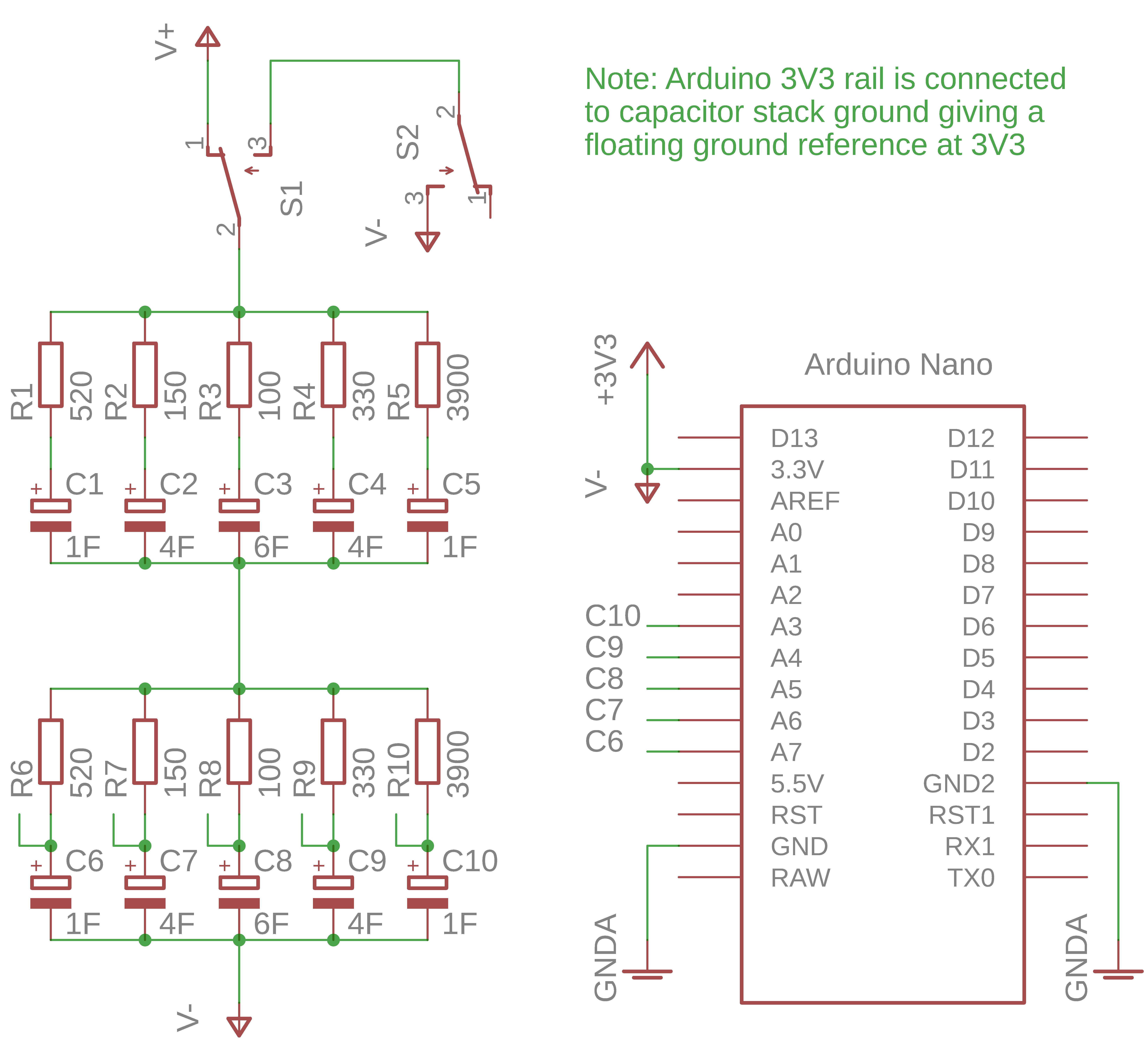 I charged the circuit up for just shy of 24hrs to 2V4 from V+ to V-. I checked the voltages across each of the caps and they were reasonably balanced (couple of hundred mV at most). I.e. each cap is sat at 1V2, no current into or out of the system (bar a few uA due to cap internal leakage).

At ~75min I set the stack to open circuit.

The observation/question. When the caps with fast RC constants (C1 & C6) reach 0V across the cap, they are fully discharged. However, they then get pushed negative. I.e. when measuring across the cap, a negative voltage appears. It goes up to negative a few hundred mV. Why? [Note: I have subtracted 3V3 from the voltage readings to get the correct reference with respect to the stack, not the Arduino]. 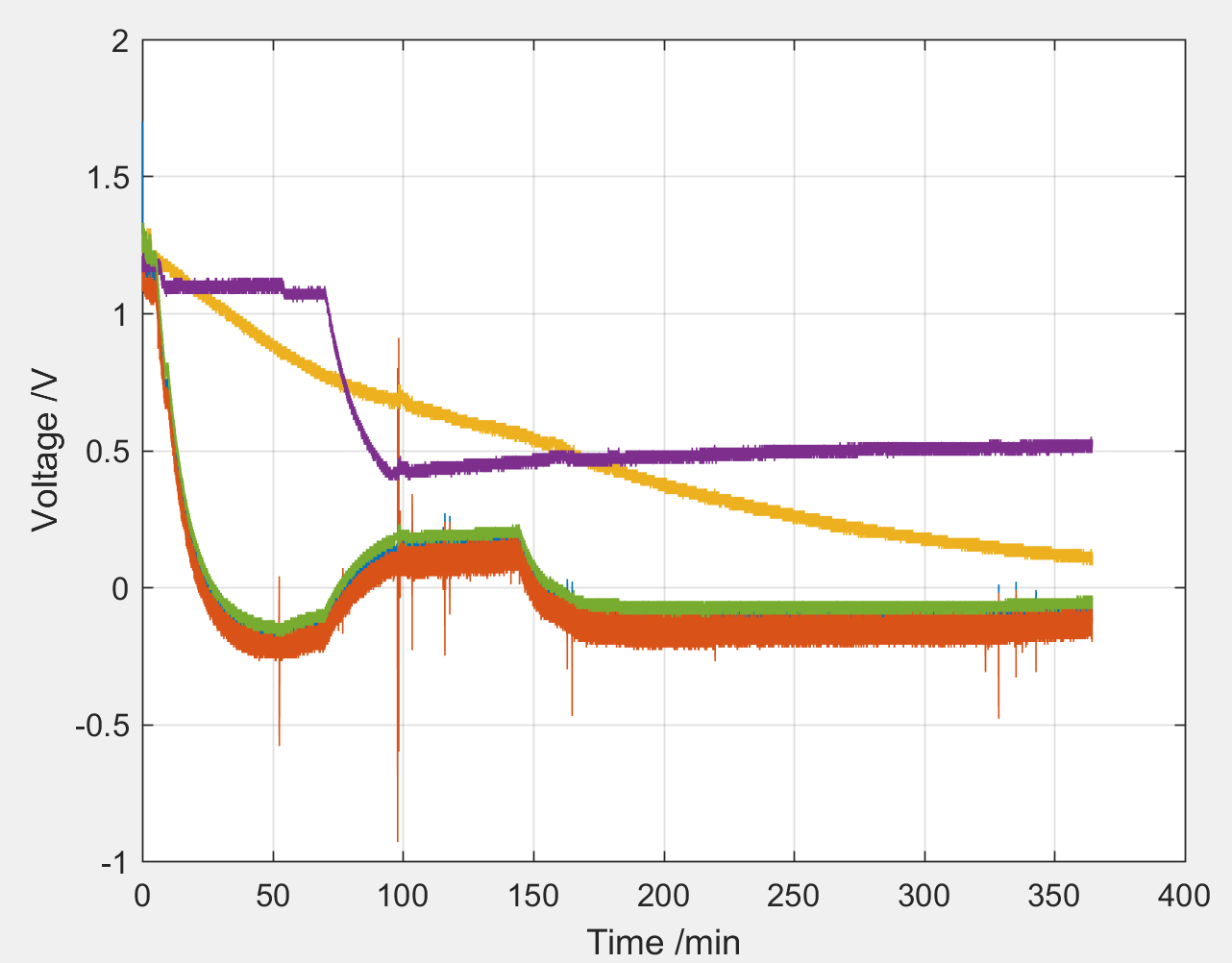 I've scratched my head over this for a while and cannot understand what is driving the negative voltage across that cap, while the others in parallel remain positive.

I've deliberately been vague on the precise readings because the input impedance of my multimeter, and the Nano suck. (I am in progress making a little voltage follower to solve this issue, and, also use a potentiostat rather than an Arduino!) Apologies on this front.

Interestingly, I have modelled this circuit in Matlab and it predicted this. I was somewhat hoping my model was wrong...maybe not?

Many thanks in advance,

PS: Massive thanks and credit will be given to anyone able to help if they're happy me crediting them on a research paper. If not, happy to not credit (I know some people don't like to be). PPS: I've not gone into detail about what the circuit represents. Happy to elaborate if people are interested (it's a skew-gaussian distribution BTW).

It goes up to negative a few hundred mV. Why?

That is why series capacitors have bleed/balance resistors across them. A negative reading is a sign that weaker capacitors (less charge) are being reverse charged by stronger capacitors (more charge). The dielectrics are NOT exact from one capacitor to the next, especially high value supercaps.

Capacitors in parallel do not have this reverse-charge issue, but the leakage values of each capacitor add up. Intentional reverse charging >1 volt is NOT recommended, as it is normally part of 'destructive' testing. This can damage the dielectric beyond repair.

EDIT: The high value resistors are part of the problem. Since you have 2 banks of capacitors of the same capacitance per bank, a single series resistor to limit charge current is fine. Add a 100K resistor across each bank for charge balancing, A 1N4007 diode across each bank (white band to + of capacitors) will prevent a discharge imbalance, by acting as a bypass for the bank that discharges faster, until both banks have drained to zero volts.

Not the answer you're looking for? Browse other questions tagged arduino passive-networks supercapacitor or ask your own question.