In the circuit below, I have noticed that when the DC motor (12V) is disconnected, everything works nice. The LCD correctly displays what arduino sends to it. But when I connect the motor as indicated and the arduino sets EN12 to HIGH and 1A to high (2A being LOW) and the motor starts, the display suddenly overwrites some of the fields with weird symbols (see the second picture). This continues even after the motor is stopped and the number of rewritten fields increases everytime the motor starts (arduino no longer manages to overwrite those fields).

I thought that L293D should isolated the circuit with the motor. I even measured the current coming from arduino into the breadboard and there was no obvious change or increased draw due to motor starting (i don't even know why there should be but I was trying to figure that out).

Is there a mistake in the circuit? 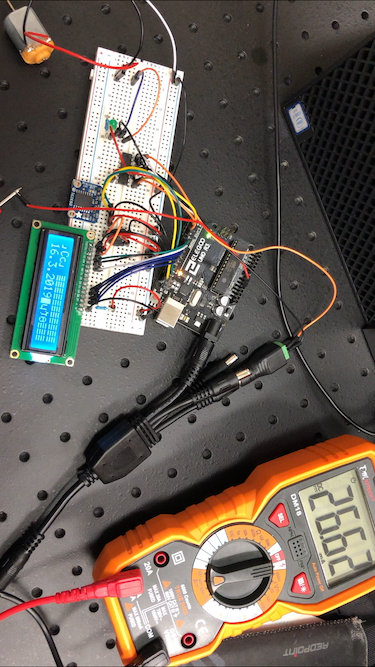 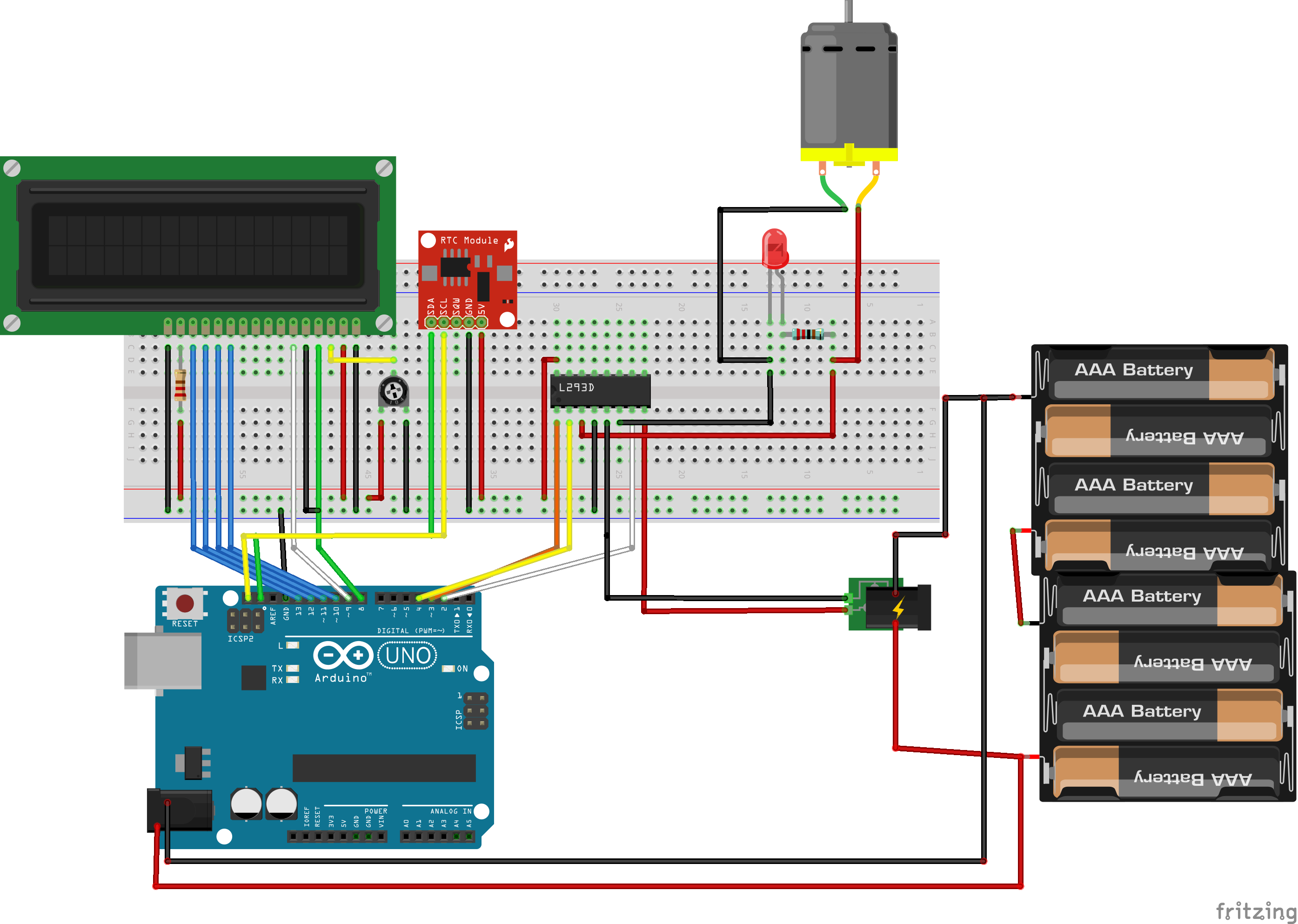 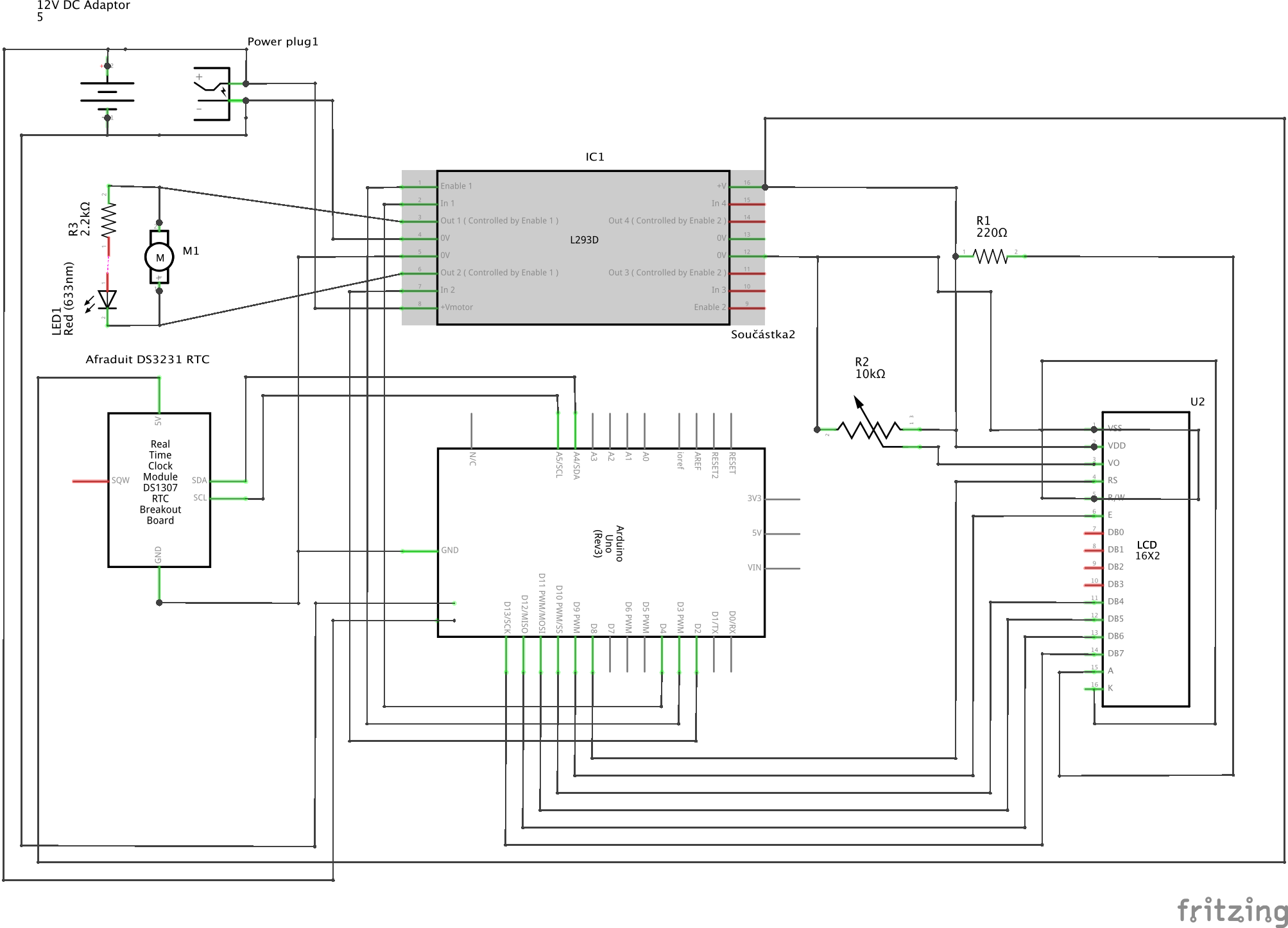 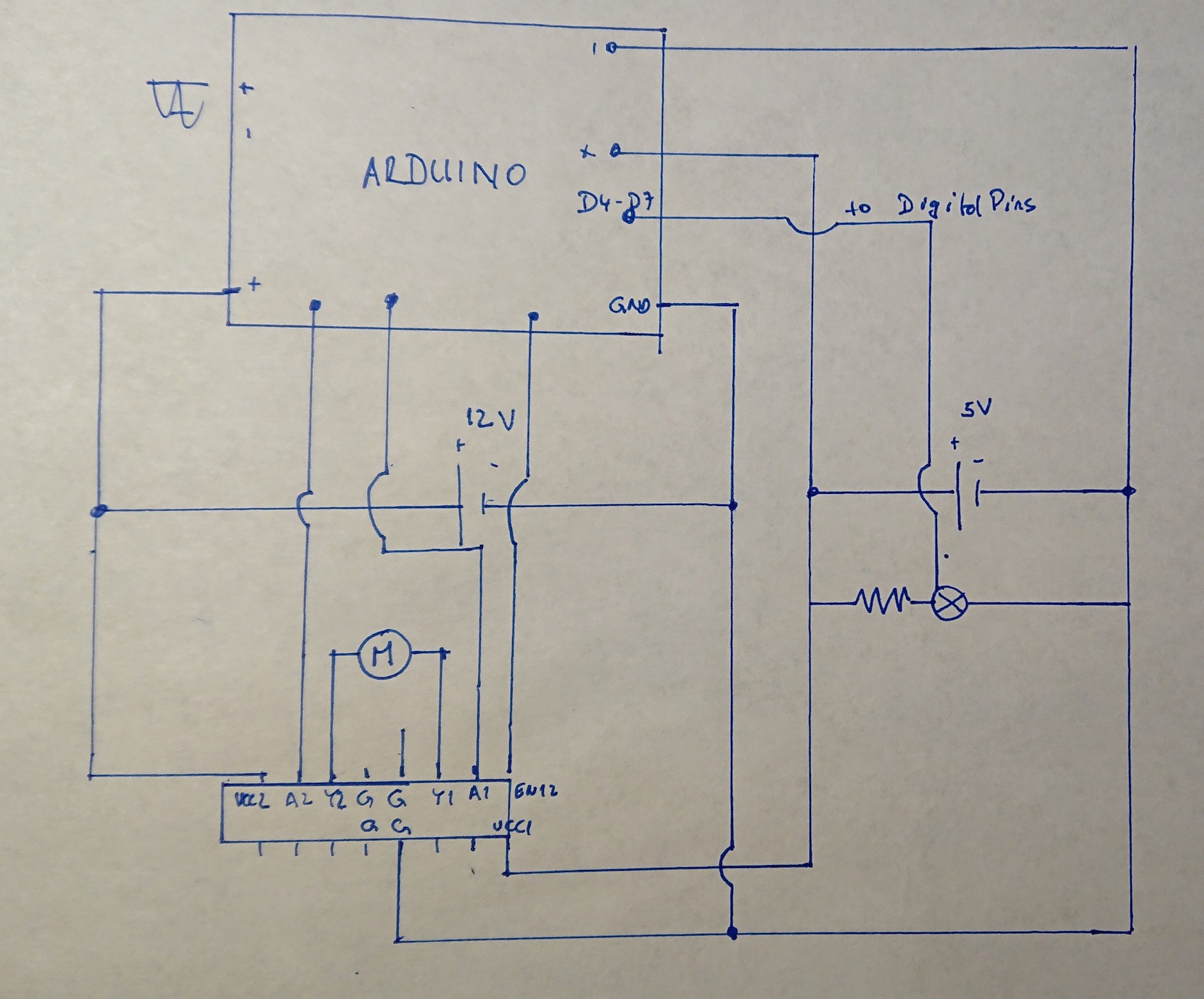 You're suffering from really bad ground loops. Basically, you've carefully arranged things so that all of the hash that the motor generates is forced to travel through a ground wire that should be providing a nice 0V reference to all of the digital bits. This means that one thing's ground is not another thing's ground.

See if that helps. 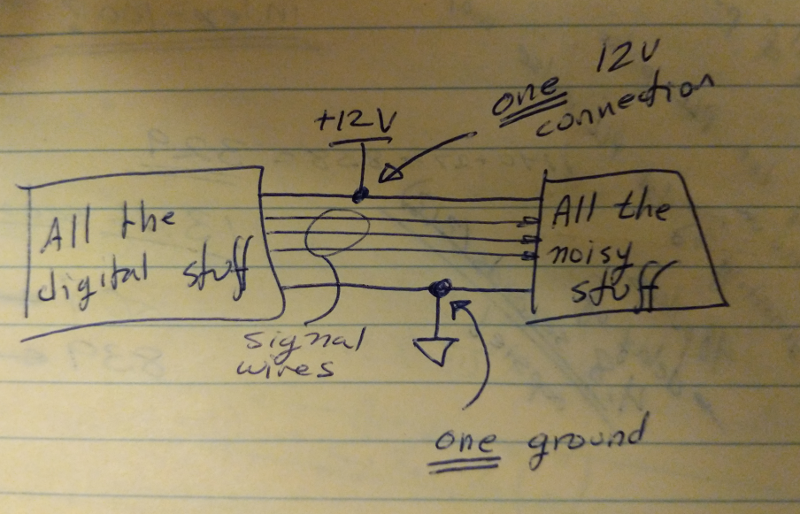 I would advise using some capacitors to reduce motor noise.

At the motor
First, place capacitors at the motor terminals as already suggested by @ChrisStratton. One 100nF 50V across the terminals and if possible from each terminal to the housing. The capacitors (partly) short the high frequent noise the motor generates.
Check Dealing with Motor Noise how to solder the capacitors. Apply other tips as well (like twisting motor and supply wires).

At the L293D
Add a 100nF and a 10uF to 100uF elco (rated twice or more your battery voltage) to the Vcc2 input of the L293D as shown in the schematic and a 100nF at the Vcc1.
The capacitors should have leads as short as possible (they are drawn larger for clarity). The order of placing the capacitors matters. The 100nF should be closest to Vcc2 and GND, the elco second closest, the red/black supply wires third closest.
Peak currents drawn by the L293D and motor will now be drawn from these capacitors, reducing noise and keeping your ground signal better at zero volt.

On the breadboard
You can supply the Arduino at VIN on the POWER connector instead of the jack connector. Connecting at like drawn in the wiring diagram, you get star points for power and ground @TimWescott is referring to (shown as circles in the framed wiring diagram).

I assume you use the regulated 5V from the regulator on the Arduino board to power the LCD, the RTC module and the VCC1 of the L293D. (It is not drawn in coloured Fritzing wiring diagram and you shouldn't indicate it as a 5V battery in the schematic).

Where the 5V and GND wires enter your breadboard, put a 10uF capacitor next to it.
Order is important again. So, first 5V/GND wires, left of it the elco, left of the elco all other connections to the 5V/GND. See wiring diagram below. 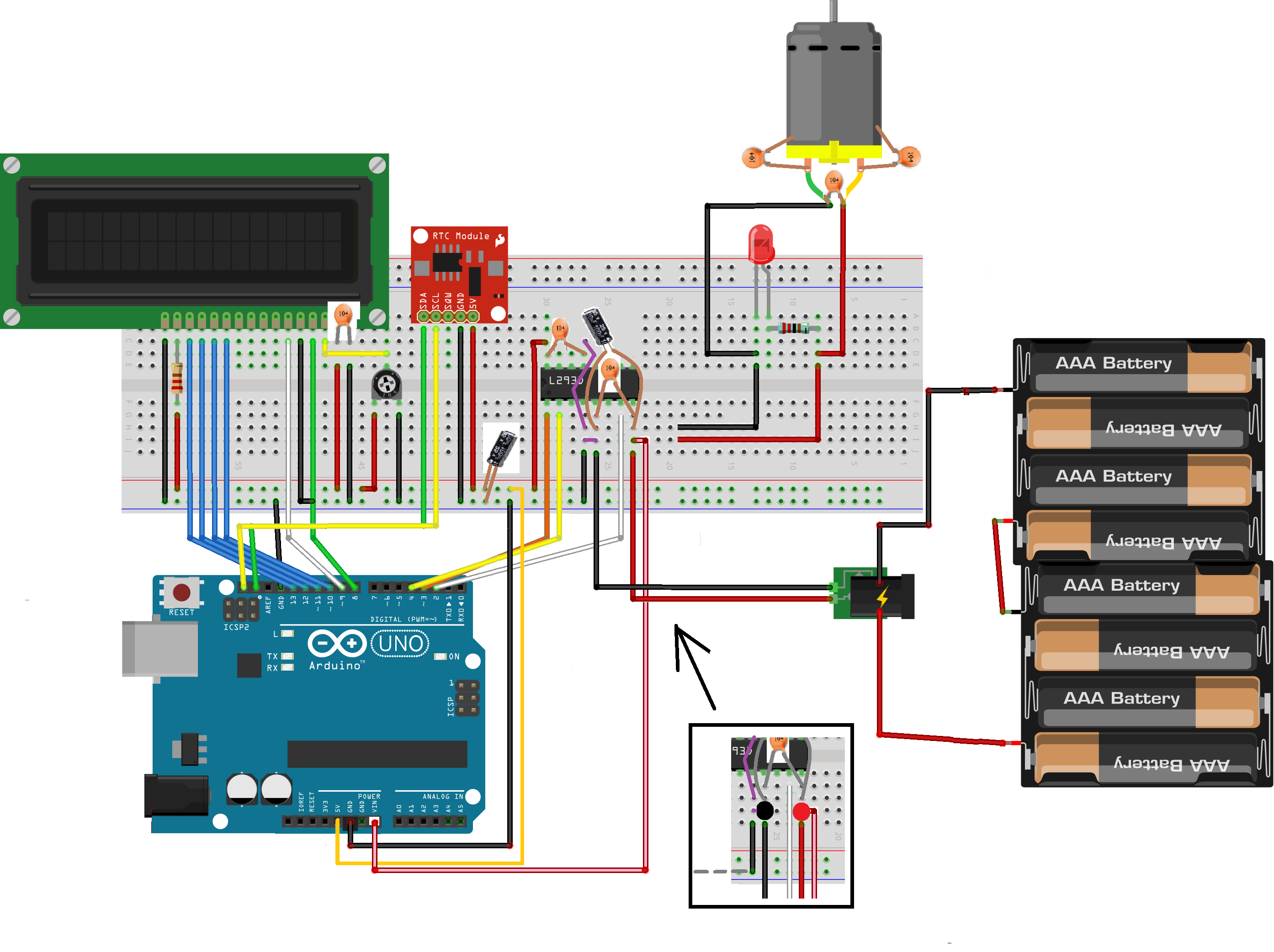 NB. Pictures of and values on shown capacitors are illustrative. 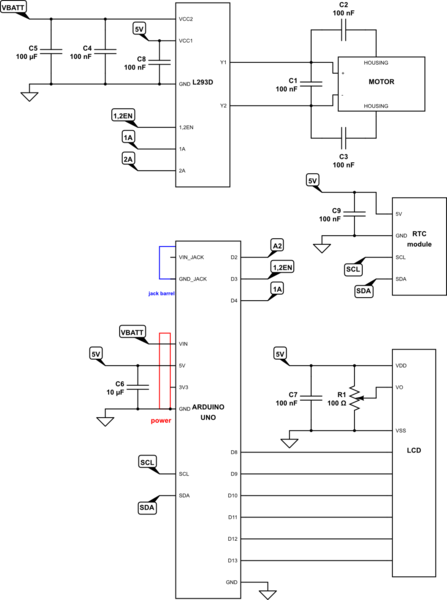 NB. Schematic is partially drawn in order to indicate the capacitors.

Not the answer you're looking for? Browse other questions tagged arduino dc-motor lcd arduino-uno l293d or ask your own question.

2
Power supply problem with L293D
1
L293D heating quickly under 0.5 A (driving a DC motor using adafruit motor shield v1)
2
Motor noise interfering with I2C
2
Finding transfer function of DC motor
0
Arduino is not getting power from adapter or Vin
0
Why do the motors for my Arduino RC car not respond to any command after the first command is received sometimes?