In any normal op amp, if it was ideal it would have a gain such that the output voltage would be

However in reality this is not the case as there is a common mode voltage gain and hence in reality the gain is different and the output voltage would be:

If we look at a simple long tail differential amplifier which uses BJTs how could this be explained? On a transistor level how can you show where this comes from? 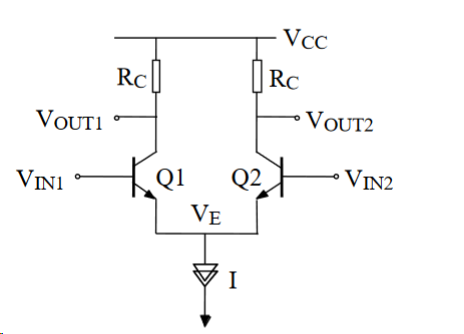 Let`s calculate the common mode gain Acm (real case with a finite dynamic resistance re in the common emitter leg):

(1) Forgetting - for the first moment - the second transistor Q2, the first transistor Q1 is operated in common emitter configuration (with current-controlled voltage feedback provided by a finite dynamic resistance re in the emitter leg): Hence, the gain is

(2) The same gain applies to Q2 (without Q1). Now - when both transistors are active and excited with the same input voltage (common mode), the current through re will be doubled (compared with case 1) causing a doubling of the feedback voltage. This can be incorporated into the given gain formula by replacing re with 2re. Hence, the common mode gain expression is:

This expression shows that the common mode gain will be zero for an ideal current source (re approachung infinite) only.

Note: The above (rough) calculation is accurate enough to demonstrate the systematic common mode effect caused by the a finite re. Other influences (asymmetry effects, Early-effect,...) are neglected.

Not the answer you're looking for? Browse other questions tagged operational-amplifier bjt differential gain or ask your own question.