Why does current not increase when the voltage increases in this case?

When talking about BJT transistors, a very common graph is the one shown below, that plots (VCE,IC) as an ascending function. As far as I know, the BJT manages VCE so that IC is beta times IB, being
VCE = 10V - IC 10K
in the example circuit. Which can be rewritten as
IC = (10V-VCE)/10K

But that equation doesn't fit the graph at all. I understand that it behaves in a different way around 0 since the voltage can not go under 0, but I don't understand why it grows. 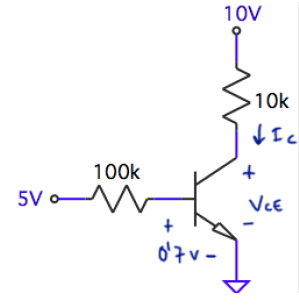 The equation you say is the one imposed by the external components that accompany the BJT, not an equation that describes inner behavior of the transistor. That graph shows the relation between Vce and Ic, for particular Ib.

I recommend you to ask this questions on the Stack Exchange forum dedicated to Electrical and Electronics Engineering for a better range of answers.

Something is wrong with the graph. Ten volts cannot push more than 1 mA through a 10 k resistor even if there is zero volts drop collector to emitter.

The transistor configuration shown is that of common emitter, which is normally used as a voltage amplifier. That is, voltage variations at the input (base of the transistor) are amplified at the output (collector).

The graph above it showing \$I_C\$ vs \$V_{CE}\$ shows the collector current (\$I_C\$) increasing until it reaches \$\sim 5.5\ mA\$, where it reaches saturation and then plateaus, with the base current being noted as \$I_B=20\ \mu A\$. This suggests that a variation in base current between $0\ \mu A$ and $20\ \mu A$ results in a variation in collector current between \$0\ mA\$ and \$\sim 5.5\ mA\$, which seems more representative of a current gain transistor configuration than voltage gain. Given the \$10V\$ source at the collector, I would think that the circuit does not match the graph.