Why do we not consider Thevenin Voltage source while dealing with Dependent sources in RLC circuits?

"If no controlling current or voltage associated with the dependent source is of interest, we may simply find the Thévenin equivalent connected to the inductor and capacitor."

This is what's written in Engineering Circuit Analysis- Hyatt, Kimberly.

After doing a question this way, I found it a little strange: We're finding the Thevenin Equivalent which includes an independent voltage(Thevenin) source and a Thevenin Resistance, and the total circuit consists of the capacitor and inductor as well. Since it includes an independent voltage source the total response should be the sum of the natural and the forced response, but we're not including the forced response in it. Why so? 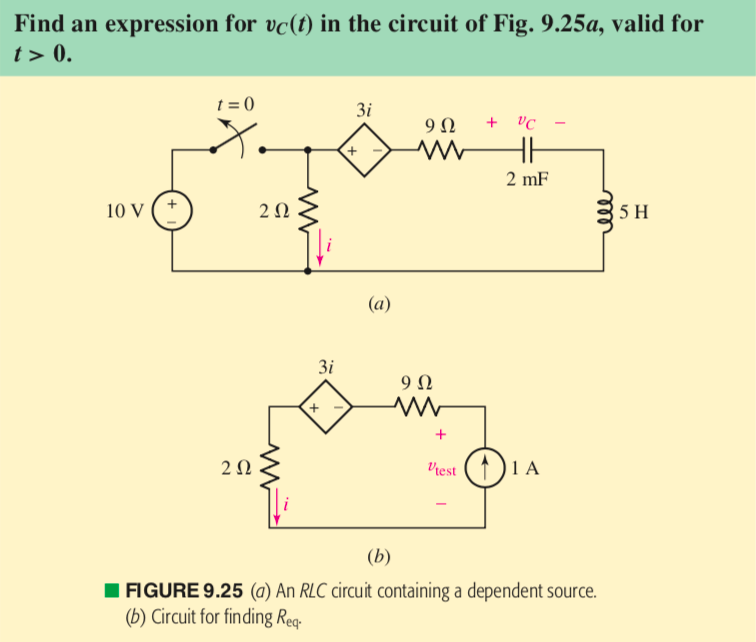 I believe what they are saying is the dependent source and the two resistors can be boiled down into an R-equivalent resistor (with the excitation source removed). This would be advantageous because one could then analyze the circuit as an RLC which simplifies the math.

So what they do is remove the L and the C and subsitute a current source, and then say "Hey, all these components are linear and function like a resistor"

If you go around the loop and find the equivalent to Vtest you get a resistor, this allows you to ignore

We are not concerned with the forced response of the circuit because there is no zero state response, the circuit has to be excited for there to be a response.

In addition 1A current through the loop helps you find Vtest for an initial condition, which will help you find Vc, because when the circuit starts up, the inductor is shorted.