What difference does it make to an appliance whether the supply is sinusoidal, or any other shape?

Just what the title states.

I understand some appliance/s may be damaged if the supply is any shape other than sinusoidal. E.g. sawtooth, square ...

Why is this the case? How does the shape of the supply signal matter to an appliance?

Many factors are associated with supply waveform like power and heat generation,charge accumulation, effective time period etc.A circuit is mostly designed keeping in mind, a type of input signal. Changes in those parameters may make circuit behave abnormally and thus sending it into an undefined state and even causing damages.

Let us understand with some examples:-

1 . In AC motor feeding a sawtooth or square waveform wont help since the magnetic field will be discontinuous with time.Also suppose you switched on a DC motor with sawtooth waveform, which usually needs PWM(consider a duty cycle of 40%) in rectangular waveform, results will be disappointing.

2 . If you are able to operate this device with different basic waveforms then please let me know!!! 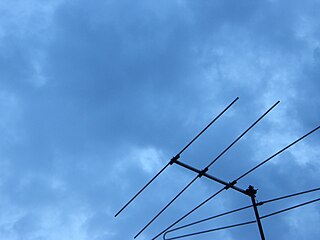 At square waveform your led will glow forever (Vmax=100V,Vmin=0V,R2=R1=1K,C1=1u) however with sinusoidal waveform its hard to imagine the previous result.

Many, if not most of home appliances have the supply directly form the mains, meaning -- in simple terms -- a bridge rectifier directly to the AC input and the a capacitor. Some of these supplies will risk deteriorating if the currents through the input stage is larger than it was meant to be.

For example, if there were a square-sine (think UPS waveform) the bridge and the capacitor would "see" a sudden current inrush and a 5ms (typical for 50Hz) conduction time, which can prove critical.

Here are some waveforms to help visualizing: 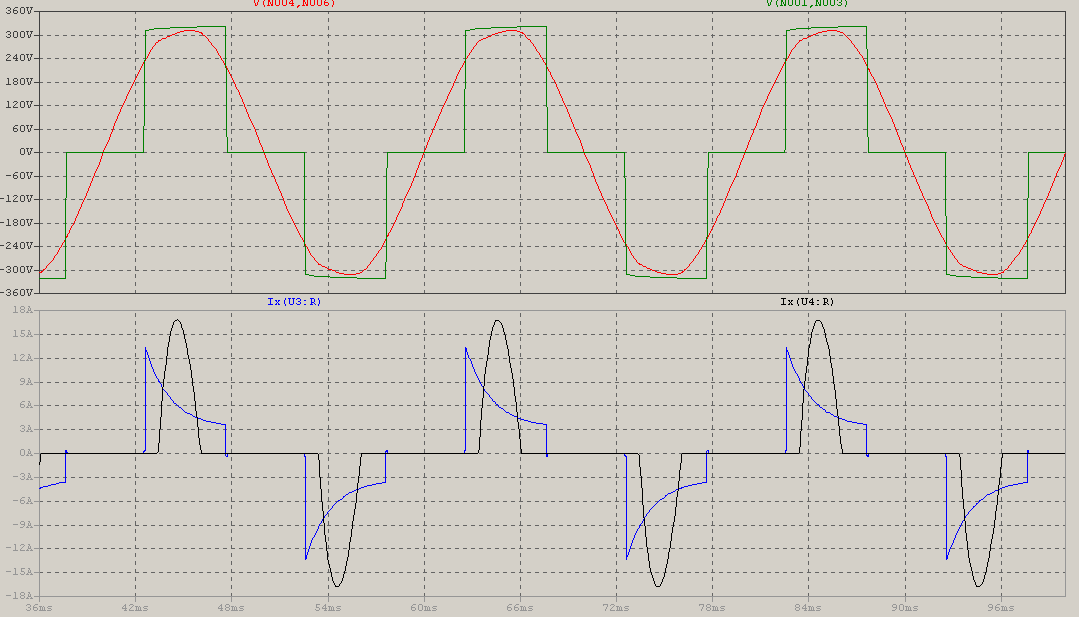 The upper traces are the voltages, compare the sine and the square. The lower are the input currents: the black one is from the sine-wave, the other from the square wave. The loads are the same bridge and R=100\$\Omega\$ parallel with C=1mF (ESR=0.5\$\Omega\$), random example values.

In general, it's preferable to have a sine whenever possible,not only for "sensible" equippment.

Just to grin a little, here's how the startup currents/voltages look like: 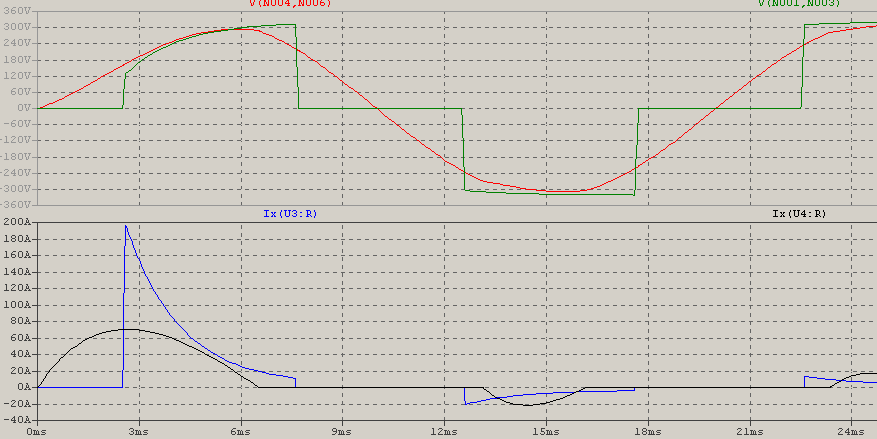 Appliances can certainly be damaged by using different waveforms. Many will not work at all. The key fact to appreciate is that the sine (or cosine) wave is the ONLY pure waveform in electrical engineering. The device relies on the correct energy being delivered and internal circuits such as transformers and rectifiers will not work properly on other waveforms. All waveforms except sinusoidal can be expressed as sums of sinusoidal waveforms. That's well outside the scope of your question here, but if interested, please check out Fourier Series at this URL.

Not the answer you're looking for? Browse other questions tagged ac or ask your own question.

32
What exactly are harmonics and how do they "appear"?
1
Does the RMS value for a non-periodic signal exist?
1
Basic electronic: frequency in power supplies, and feeding 400Hz to a 50Hz device
2
Why a CFL lights up when I touch it?
3
How does multimeter AC measurement work?
0
Understanding the effects of frequency on appliances
18
Is a sine wave (or any signal) that has no zero crossing still considered AC?
3
Hysteresis curve does not look like what is expected on the oscilloscope