I have a board with two LTM8073 "silent switcher µModule regulators" by Analog Devices/Linear Technology being used to provide two separate power supplies. This is a 10-layer dual-sided board that was put together by a very experienced PCB designer.

Both supplies receive 48V in and they provide 3.3V and 5.0V respectively. These power a Trenz SBC that has its own set of 1.0V, 1.5V, 1.8V supplies being fed from the 5.0V supply and thus taking most of the load. Otherwise most of the design and layout is nearly identical. The design is very close to the recommendations presented in table 1 of the data sheet, I only increased the switching frequency of the 3.3V supply slightly to 1MHz, well within the recommended range. But I am having a couple of odd issues with the 3.3V supply. 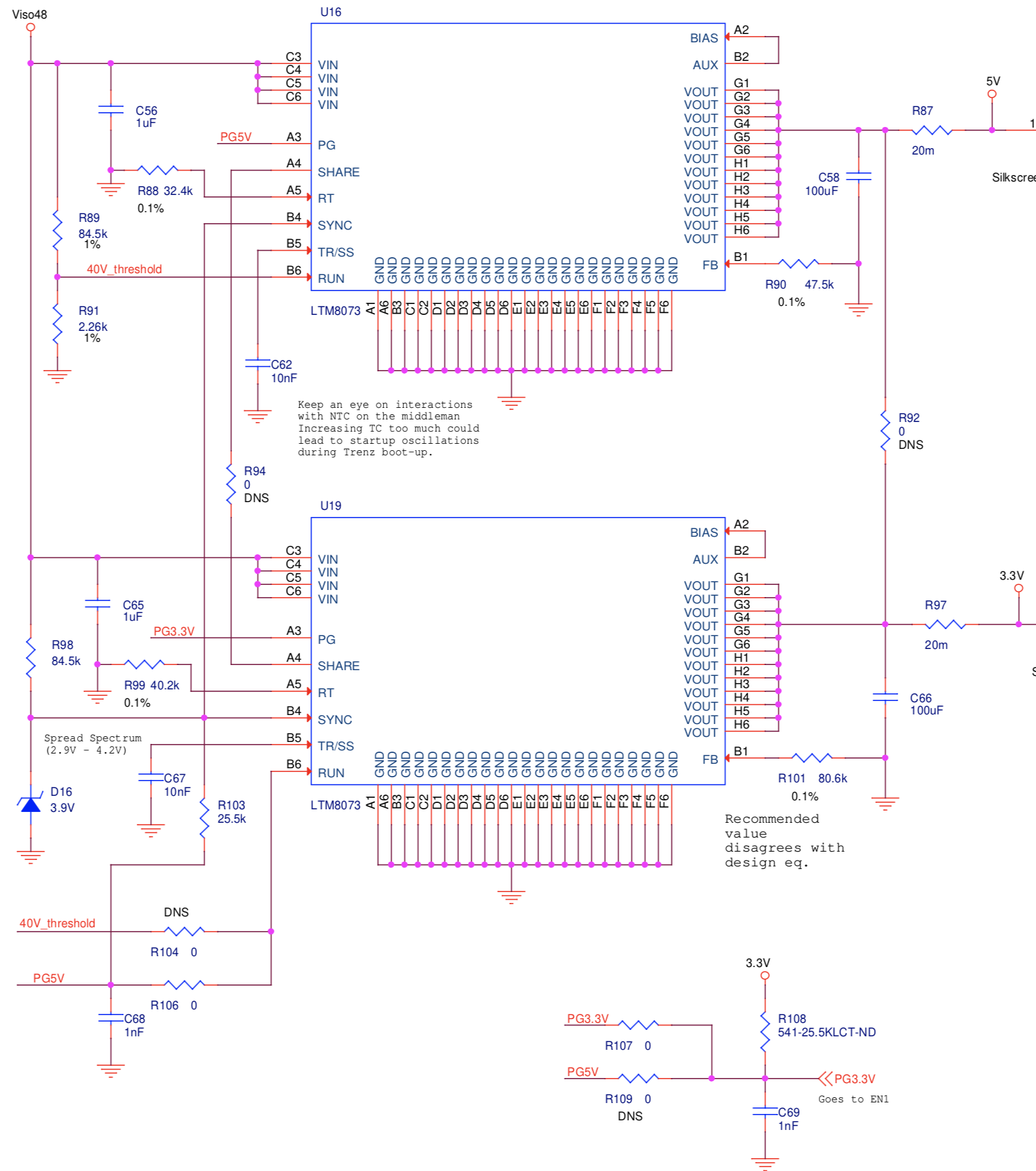 Although I doubt this will be useful, here is a bottom-side view of the board with only the top and bottom layers shown. The 3.3V supply is U19, the one at the top (the supplies are mounted on the top layer, but nearly all of their passives are in the bottom layer). 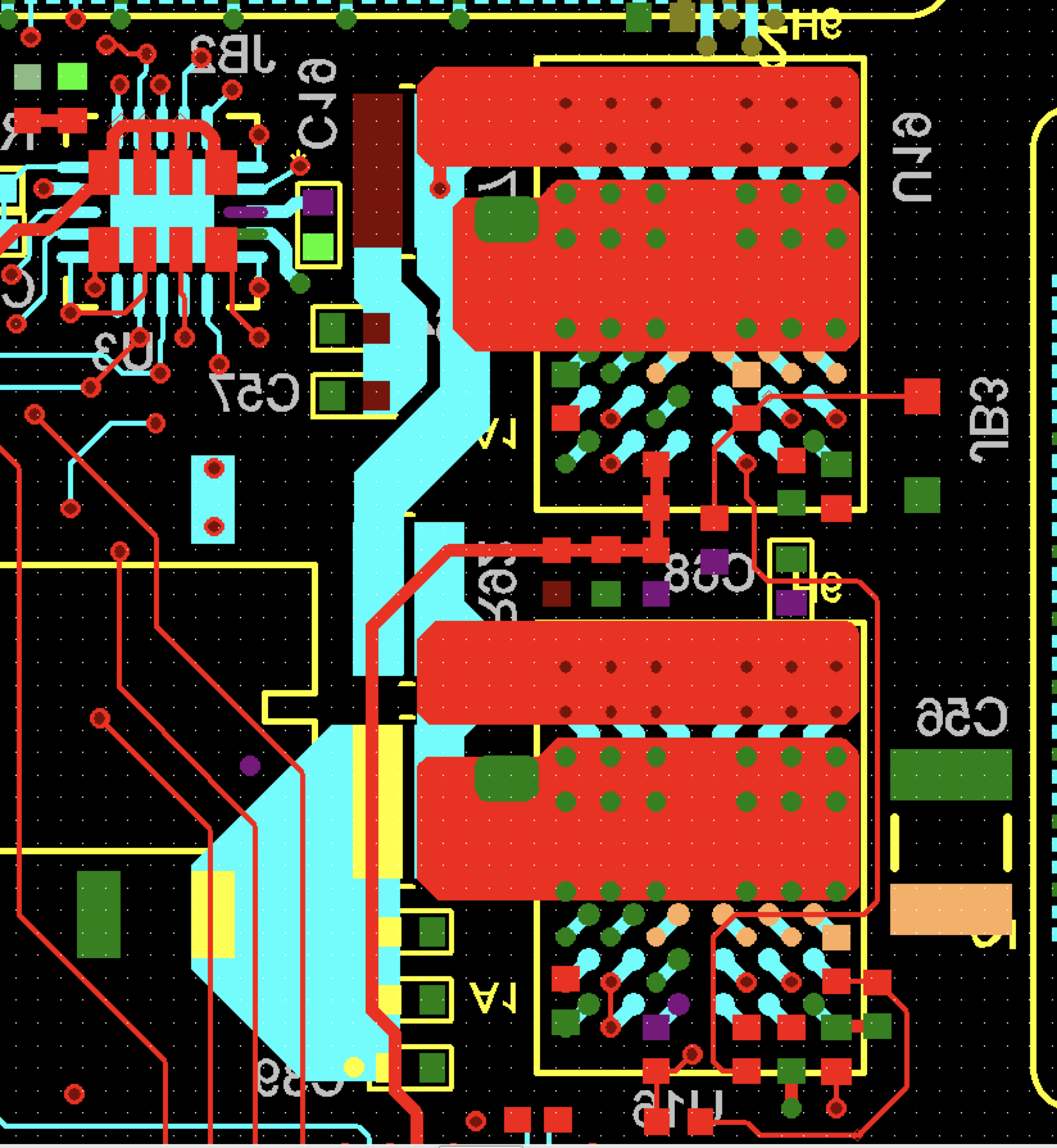 As an aside, I checked the traces that seem to snake and surround the supplies. These are either unconnected (share lines), outputs (Power Good), or low-impedance configuration lines (Sync).

The data sheet has an error in their recommendations for feedback resistance for a 3.3V supply. The design equations indicate 79.9kΩ while Table 1 says 80.6kΩ, I stupidly followed the table which later I corrected by adding a 5MΩ parallel resistor. This should result in 79.3kΩ and 3.32V.

Where should I look?

When connecting the SBC (which should take most of the power from the 5V supply) I cannot get the module to power-up properly. The module goes through its initial power sequencing, starting its 1.0V, 1.5V, & 1.8V supplies all of which come from the 5V supply, but when it switches on the pass-switch from the 3.3V supply it causes it to droop enough for it to go out of regulation and drop its power-good signal. Which then restarts the power sequence again. This can go on indefinitely.

I measure the load on the 3.3V supply to rise to about 1A in 5µs (it's supposed to regulate in excess of 3A) before the supply drops its power-good signal. On the other side of the switch the voltage only increases by about 100mV. The Trenz 0702 SBC uses the TPS27082 power switch which provides soft-start capability and seems to be configured for about 300µs startup time.

By placing a temporary bridge across the TPS27082 switch, I can get the system to start and the board works as designed with a total load of ~4.5W (most of which is in the 5V supply). I have not yet measured the current consumption in the 3.3V supply, but it is sitting at ~3.16V.

The issue is clearly triggered by power-up inrush, but (1) the 3.3V supply should handle the inrush, and (2) this does not explain the relatively large error that it starts from. I looked at the additional capacitive loading I added to that side of the switch and it is less than 50µF in total. 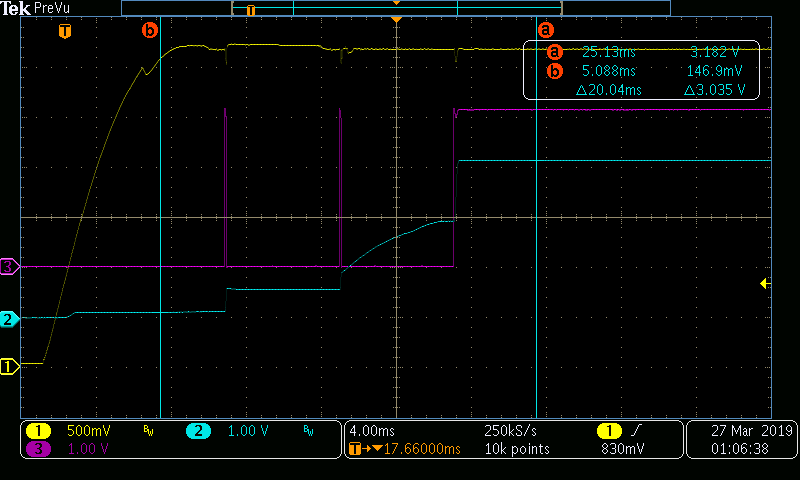 Any suggestions on where to start looking or how to fix it? I have ways to hack it, but I would like to know the actual root of the problem.

A 1A initial surge in a 3A supply should not cause it to lose regulation. I see no specifications in the datasheet for transient load increase from zero.

I went down the layout route but it was all a red herring. I now wish I had just hacked the board from the beginning and I would have found the problem. I simply added a 220nF capacitor on C68 which introduces enough delay in the power-good signal for it to go through the problematic zone and recover before the signal crosses the threshold.

The issue is that for some reason that is not completely clear, the 3.3V supply sees a peak of ~4.5A in a critical part of the transition. The 3A supply simply cannot provide that much current so it correctly goes out of regulation. The fact that the SBC's development board doesn't use the power-good signal at all should have clued me in. 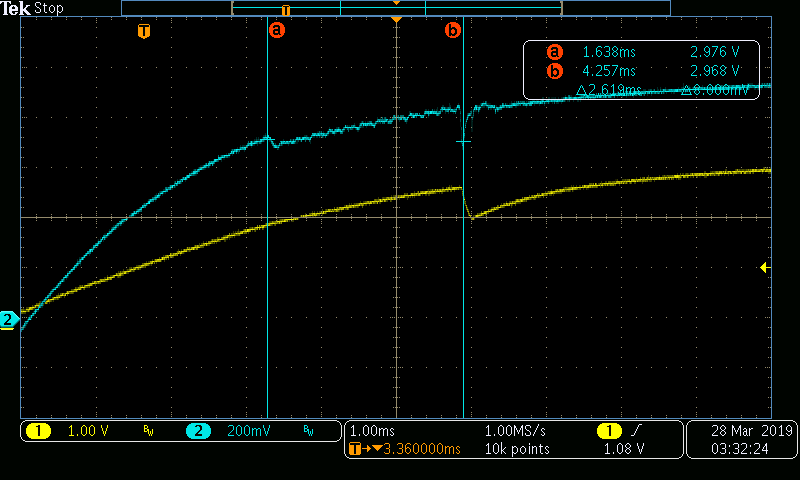 Voltage on the 20mΩ resistor used to measure the current on the 3.3V supply. This shows a 4.5A peak. The blue trace is the SBC 3.3V switch /enable signal for reference. 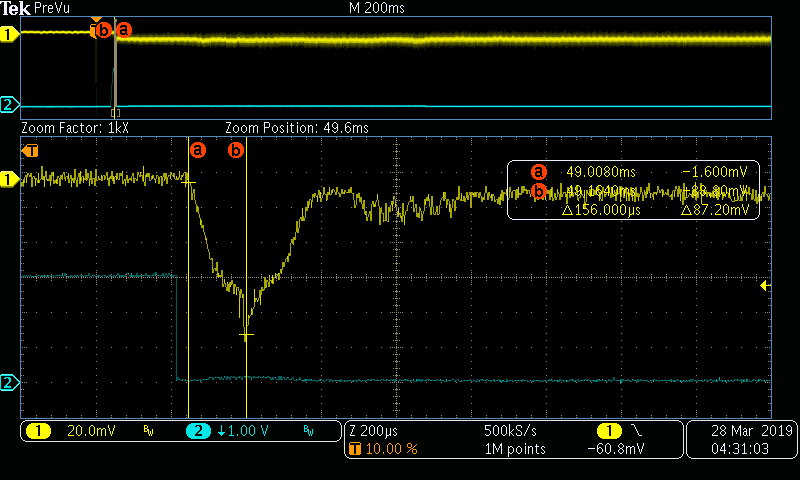 The 3.3V SBC supply, note the inflection at ~1.2V. The blue trace is the SBC enable signal for reference. 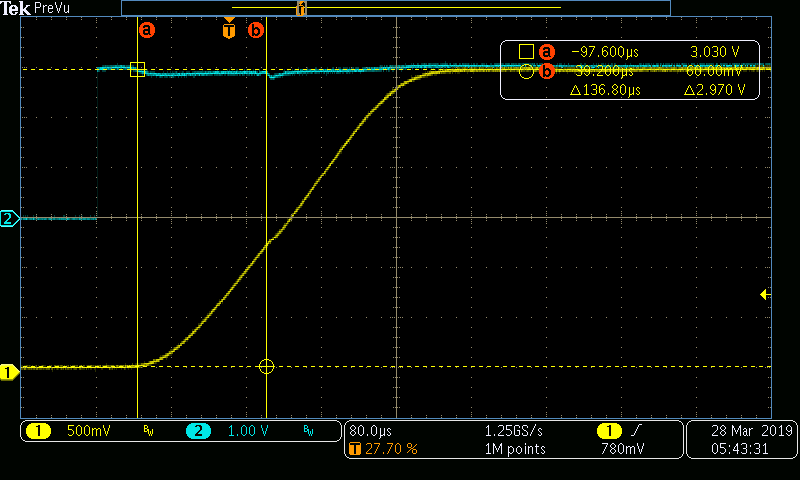 The only issue that remains has to do with the voltage error in the supply. Both supplies have much more error when providing 3.3V than when providing 5V. But this is more of a curiosity than an an actual problem at this point.

Not the answer you're looking for? Browse other questions tagged dc-dc-converter buck inrush-current power-sequencing or ask your own question.