While studying I ended up finding this question.

Write the value (in hex) of the P1 after the execution of the code below. 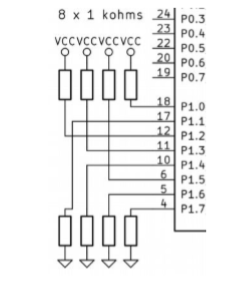 I tried to answer the question, but I'm not sure of my answer. Can anyone help me?

My approach to solve the question.

First I analyzed the code and I saw that the P1 output would be 0x01.

And then I analyzed the hardware.

But what if we have something like, by code PX is set to 1 but it's hard-wired to GND. I learned that open-drain port configuration work as a di-directional port, working as an output and an input, but I didn't get what happens when he have a mismatch (trying to set a ouput, where would be a input).

Keep in mind that "open-drain" means that if you write a 0 to a pin, it will be forced to zero, but if you write a 1, then the pin will take on whatever state is determined by the external connection. The combination of the two for each pin is what you get when you read the port.

Not the answer you're looking for? Browse other questions tagged microcontroller 8051 or ask your own question.

1
Is it wrong to write HIGH to a pin used as an open collector?
0
Baseline PIC12F509 BTFSS Instruction Issue
0
8051 ADXL SPI interfacing
0
Open Drain while transmitting data with port direction output
1
Calculating required delay before pin value is recognized in 8051
0
PIC MCU and LCD display 16x2 - strange behavior
0
Is Pull-up present by default?
1
Pullup resistor operation between the ESP32 and a Bus MCU
0
Do carbon resistors not follow tolerance as they age?
0
Microcontroller and LDO and +5V pull up sneak path