Removed all ceramic SMD capacitors without markings on them from the board… what to do? [closed] 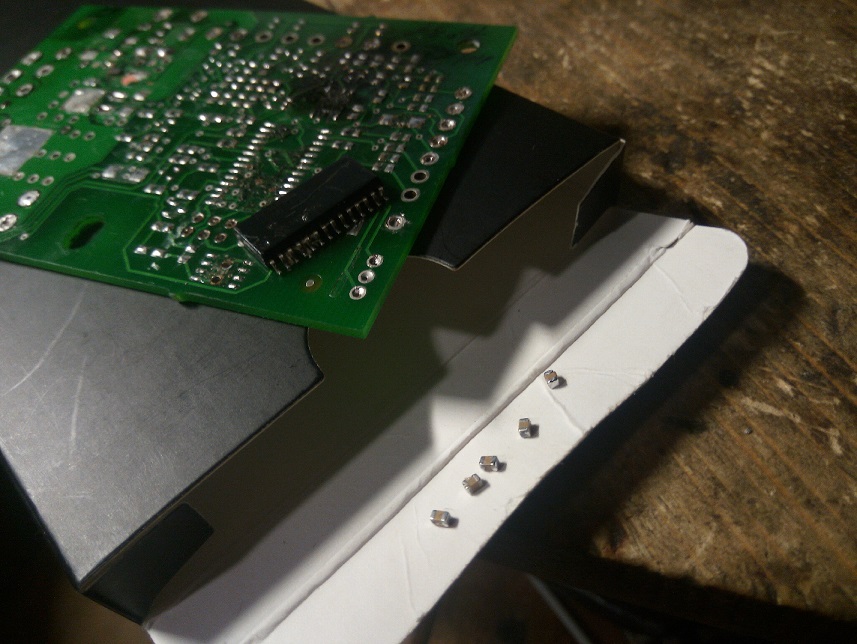 When I told a buddy that I am taking electronics courses and learning to manufacture simple homemade PCB boards, he found me a client with an interesting offer: To reverse engineer a small PIC controller board.

I never did reverse engineering before, but I am not too unfamiliar with the subject. I read materials on reverse engineering and decided that it's worth a try, especially since the client pretty much allowed me to abuse the probably-dead board as I see fit. Obviously I took a lot of pictures, including macro, found as many datasheets as I could and wrote down all the info on every component.

When it came to finishing the drawing of the PCB that I was doing in DipTrace, I knew I had to finish stripping down the board all the way, to study the circuitry a lot more closely and make sure I didn't miss anything hidden underneath the SMD components. (As it turned out, I missed many little details that were covered in thermal-glue and chunks of thermal rubber compound or something it was in originally.)

Now I had a good amount of mistakes during this process and I knew it, because this was the first actually serious job offer I had in this field. I just didn't know which mistake would show itself first. It was the unmarked ceramic capacitors. Around 7 or 10 of them, all roughly the same size (and I am pretty sure I lost one too).

Resistors were not a problem, they had numbers on them, and I had lots of photos to see where they would go on the board when I duplicate this one. My multimeter ran out of batteries and it took too much time to desolder and measure them and I really wanted to finish drawing the thing in CAD (I've been working on it for 2 days) so I just quickly stripped the board of all the remaining SMD components using a soldering fan.

Now I am not sure if I can place them in the right order, because while they are all the same size and same color. My dying multimeter with its unclear jumping numbers, hinted at the fact that they are not the same, as each cap was jumping around its own number before losing its charge to the multimeter (some are 30-40, others are 5-10 and so on). Maybe they are the same, but are at a different stage of holding the charge.

Anyway, I am guessing that if I solder them all to the same places they were originally soldered, using photos I took as a reference, wouldn't necessarily work. Any tricks that can help me? (I was thinking of first soldering everything back into its proper place EXCEPT for the caps and using surrounding parameters to see which should go where?) I also heard other people say that WITH MODERN electronics SMD caps it rarely matters, if they are around the same size physically. (Also there is a matter of the one I lost while poking it with a multimeter.) What are my options?

The proper way to do this is to obtain another card. Remove the capacitors one at a time and measure them. Be sure that you have a working capacitor measuring tool. You can fake one easily if you can't find a dedicated meter.

Be sure to carefully document what value goes where on the board. Then obtain new capacitors of the correct values and put them back on the board.

Sometimes capacitor values matter, sometimes they are not critical. The only way to know for sure is to have a schematic diagram and a good understanding of how the various circuit elements operate. You can fairly quickly determine if a particular capacitor's value is critical or not.

Not the answer you're looking for? Browse other questions tagged capacitor surface-mount or ask your own question.

6
SMD ceramic capacitors producing ticking sound?
2
Why are SMD Diodes different Packages than Resistors and Capacitors?
0
SMD capacitors for a guitar distortion pedal
0
Desoldering a TO-220 MOSFET from a plated through-hole board with SMD complications
2
Why do 100 nF ceramic disc capacitors from multiple sources, measured with two instruments, all appear to be below tolerance?
0
Trying to identify SMD component from a Ps2 Slimline