Where to connect the VNA during matching network tuning

I'm trying to design the matching network between an antenna and its transmitter, running at 868MHz, as shown below. There's probably about 20mm between the transmitter output and the Pi network. 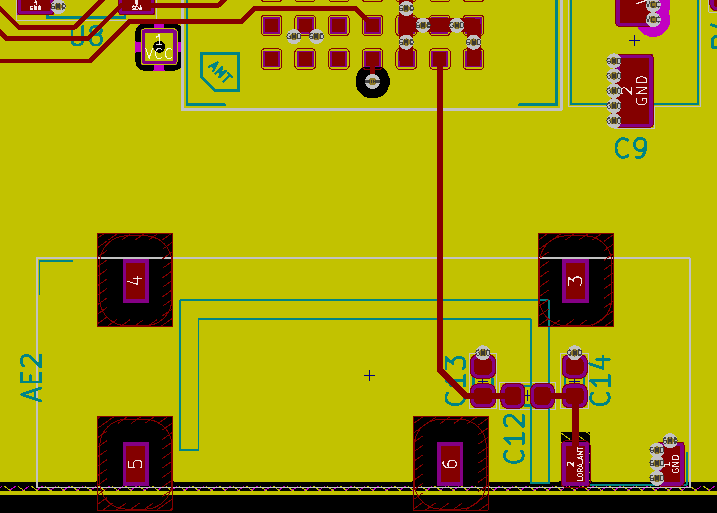 When connecting the VNA to the PCB in order to measure the impedance, where should the VNA be connected? At the transmitter end, or at the start of the Pi network?

My understanding was that in order for the VNA to "see" the load how the transmitter sees it, the VNA should ideally be connected close to the output of the transmitter (in my case, I have a blank PCB, so I've soldered a UFL connector directly on the transmitter output pad). However, after reading this article by Tektronix, it states the following:

it’s important to keep in mind that the impedance to be matched must be measured at the point where the matching network will be placed.

The VNA should be connected in one of two ways:

Not the answer you're looking for? Browse other questions tagged antenna impedance-matching vna tuning or ask your own question.

8
Antenna matching network. What? Why? How?
2
Designing a matching network with biasing inductor
3
Impedance matching network for a varying load
6
Antenna Matching Network
2
VNA Tuning in Enclosure — LiPo Battery Detuning Antenna
2
At which point and how to connect VNA on the PCB for antenna tuning?
1
Soldered wire or test connector for VNA measurement?
0
RF Matching Problem
0
Circuit for selecting between PCB antenna and external
1
How to match RF output of (30+j10) Ohms to 50 Ohm antenna with matching network?