How does residential electricity work?

I'm trying to understand how the electricity works in my house. I live in the US. I know that at the transformer, the primary winding induces a current in the secondary winding. The secondary winding is center tapped with a "neutral" line. The neutral line is grounded to the Earth. Here is the diagram: 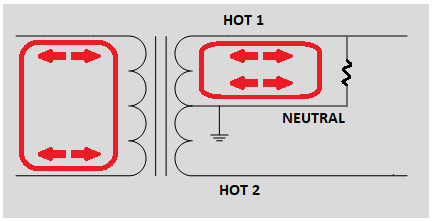 1) When the circuit is closed, are hot 1 and neutral both "hot"? That is, are they both carrying a current of 120V that is alternating back and forth? 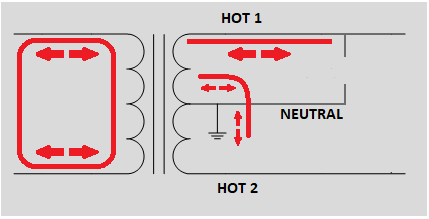 3) When the circuit is open, the neutral is not "energized" like hot 1. Why not? I know it has to do with it being grounded to the Earth, but I have not found an explanation of what is happenening at the level of the electron. Are the electrons alternating back and forth in and out of the Earth instead of through the neutral wire?

When the circuit is closed, are hot 1 and neutral both "hot"? That is, are they both carrying a current of 120V that is alternating back and forth?

First, "a current of 120 V" doesn't make sense. The units of current are amperes or amps. Volts are a unit of voltage (potential difference), not of current.

The neutral wire carries current. The amount of current is determined by the load. But its potential (voltage) remains very close to ground, so if you touched it while your feet were on the ground, there wouldn't be a very large voltage applied across your body, and therefore we don't say that this line is "hot". (Don't actually try touching the neutral line because there are a variety of ways your wiring could be faulty that could make the neutral line hot and dangerous)

When the circuit is open, there is no current flowing. So, what are the electrons in hot 1 doing? Are they still oscillating back and forth?

If there is a parasitic capacitance (there is) between the hot line and either the neutral line or the actual earth, then to a certain extent, the electrons in the hot wire will indeed flow back and forth charging and discharging this capacitive "load".

When the circuit is open, the neutral is not "energized" like hot 1. Why not?

When the circuit is open, a small current might flow in the neutral line due to parasitic capacitive "loads" I mentioned above.

As an aside, (this may be an unpopular/controversial opinion) but I don't believe you need to know what's happening at the electron level to understand basic electricity. Even at the advanced level, the electromagnetic waves that the oscillating electrons are generating are far more consequential than the electrons themselves. It only becomes really necessary to ask yourself 'what are the electrons doing?' when/if you study semiconductor physics. Even then, you don't need a PhD in semiconductor physics to successfully design a circuit including diodes and transistors (which is good, because that stuff can get seriously complicated at an advanced level). Focusing too much on the electron when one first begins to learn about electricity leads one to such incorrect conclusions as 'electrons travel at the speed of light in a wire', 'conventional current flow is incorrect', etc.

What you are missing here is that voltage is not current, it is pressure. The 120V side of the circuit has a lot of pressure, enough so that under bad conditions you can be killed by it. (Note that it actually takes current to kill, voltage only matters in that it must push hard enough to send enough current through you. Thus extreme voltages without the current behind them can hurt but won't kill--that's why you don't die from a static electric snap and why a teacher of mine from long ago didn't die when he made a mistake with 300,000V.)

Lets try looking at it with water instead of electricity. Go outside, consider the garden faucet. Inside the pipes there is probably something in the ballpark of 60 pounds per square inch of pressure. (This can vary considerably depending on where you are, though.) This is the equivalent of your hot wire.

Outside the faucet there's no pressure, that's your neutral. Open the faucet, water comes spitting out--that's current. You still have pressure in the pipes, though, and you still don't have pressure outside the pipe. The pressure of the water isn't enough to harm you, though--it's more like a 9V battery than mains power.

Based on the responses and brainstorming, I developed an explanation: 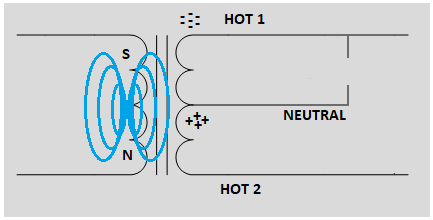 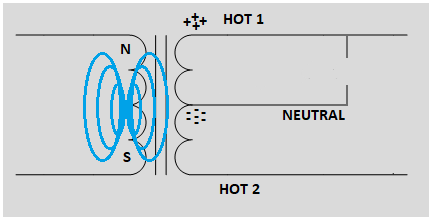 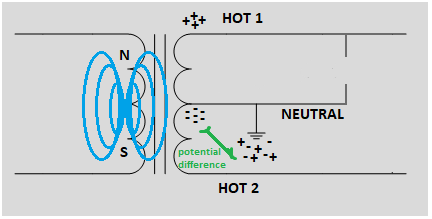 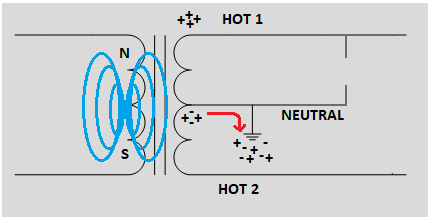 If I am standing on the Earth and touch the neutral wire, there will be no potential difference between the Earth under my feet and the neutral pole of the secondary winding. So, no current will flow and I won't get shocked: 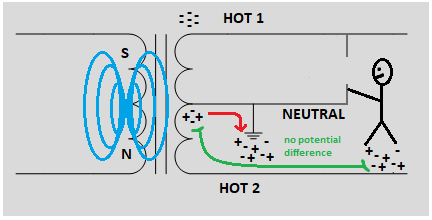 If, however, I touch the hot 1 wire, which is connected to the pole where the overall charge is either negative or positive, there will be a potential difference between the pole and the balanced charge under my feet. Current will flow and I will be electrocuted: 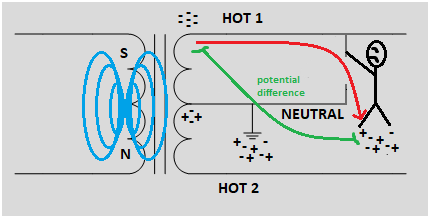 In a closed circuit, there is a potential difference between the hot 1 pole and the neutral pole, so current flows: 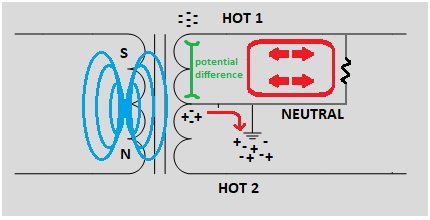 Not the answer you're looking for? Browse other questions tagged current transformer ac grounding or ask your own question.

22
Do electrons actually flow when a voltage is applied?

0
Mutual Induction in Transformer
3
240V split phase and 240V single phase
1
Why have a ground rod?
0
Ground losses in mains delivery network
3
How does a center tapped transformer work?
2
Why does a Tesla coil secondary need intermittent excitation to achieve resonance?
1
Why did my transformer explode? Was it faulty?
0
Does connecting neutral to chassis (bootleg ground) rise chassis potential to main's voltage with respect to ground?