Wasn't sure how to headline this but here it is:

I'm debugging one of my coin cell ON/OFF switch. Circuit is as follows: 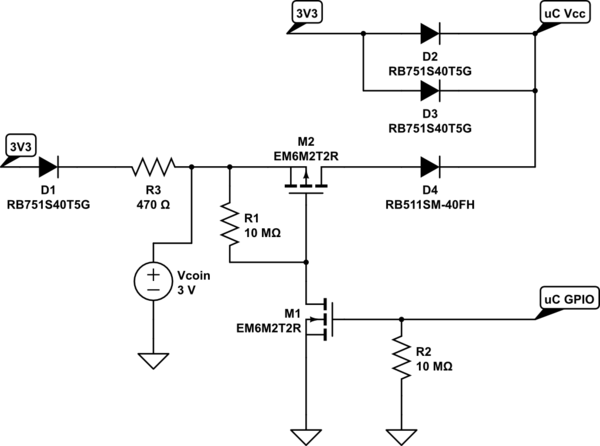 Basically a high side switch for the coin cell that would power a uC.

I've tested the MOSFET named in the schematic and also FDY4000CZ - both have same issue:

Issue is, that I am seeing some premature logic level on "uC GPIO", which

1) when applying power causes Vcoin to be slightly attached.

2) When removing power, the MOSFET does some 'jumps'. In frequent cases, keeps oscillating on/off - very dangerous for the coin cell which it can be depleted. 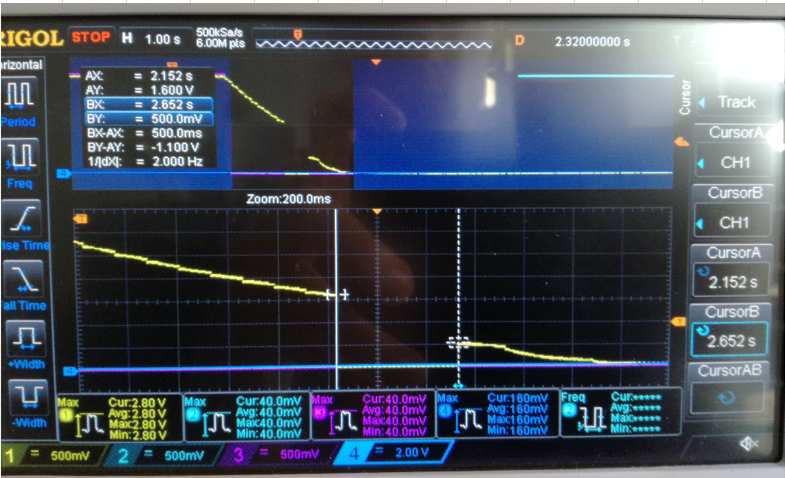 Nothing else attached for this measurement.

(NB: uc GPIO does NOT go High in startup, so it doesn't seem to be startup FW issue. So there must be some leakage?) 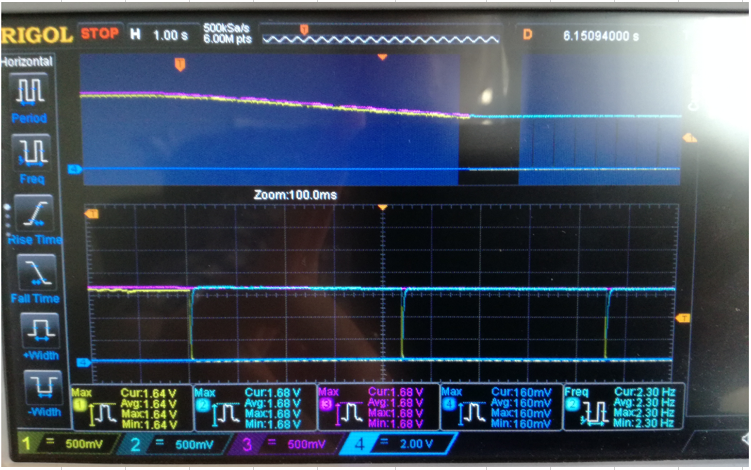 Closeup of the small peaks: 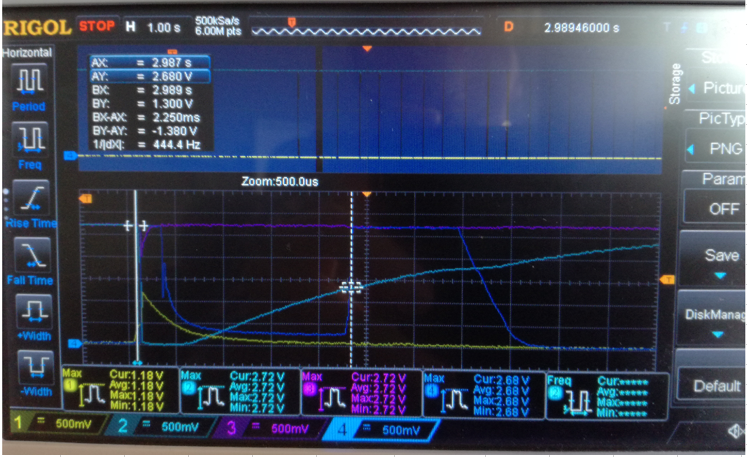 I'm all out of ideas, why this happens, or how leakage can turn uC GPIO high for a moment...

(The pull-resistors could be too high aka weak, but I cannot go much lower (I've seen 500k kind of solve this oscillation issue) because I need to keep current consumption for this circuit very low. These 10M resistors allow me to draw ~5uA average in total - which would be ideal.)

My first impression was, that R1 and R2 are way oversized. 10M may be considered as an open circuit in some applications.

Try lowering those resistances and see if your oscillations persist.

If the oscillations stop you could raise the resistance again but bypass them with small value ceramic capacitors to provide a low impedance return for transients.

Designing low power systems is not easy and you will be tempted to use huge resistance values but they often cause problems like the one you describe.

No guarantees, but I've had good results in very roughly equivalent situations by adding a small amount of hysteresis to the control input.
In this case eg place a small resistor Rh in the source of FET M1 and return R2 to the top of Rh. How small "small" is is a matter of experiment or possibly of design - although in this case there are enough uncertainties that experiment is probably a good start.

When uCGPIO is low M1 is off and the top of Rh is at ground.
When uCGPIO goes high M1 turns on, the current in Rh produce a small positive voltage in Rh and the voltage on M1 gate increases.

This effect MAY be able to be increased slightly by placing a say 1 M resistor Rd between M1gate / R2 junction and uCGPIO. What this does is to provide a more formal voltage divider formed by [Rd] - [R2 - Rh].
Without Rd the increased voltage provided by Rh is attempting to "lift" uCGPIO which is low impedance. With Rd the voltage on the gate is able to be 'lifted' by voltage on Rh as Rd isolates the low impedance uC drive.

Decided to add my own answer, as I did slightly something else that was provided here by others.

I ended up using a different MOSFET, namely FDY4000CZ.

It showed more stable results even with my current high pull-up and -down resistors. So in a way @swles answer was the closest and also confirmed kind of my suspicions but wasn't a good solution with the original MOSFET as I needed to use ~500k resistors which increase low power consumption a lot.

But replacing the current MOSFET with another one, which has slightly higher threshold voltage, doesn't produce that long oscillations and dies off after a few peaks.

At least the circuit closes and won't discharge my coin cell. I can live with that :).

Not the answer you're looking for? Browse other questions tagged mosfet switches high-side or ask your own question.

0
MOSFET N channel power switch: high side doesn't work and low side would need multiple MOSFETs
2
Why am I getting negative voltage on MOSFET gate?
0
MOSFET turning on
2
MOSFET for 5V high-side switch
3
Inverter Design - High Side MOSFET Switch-off Issue
4
MOSFET High Side Switch of high DC voltage (60V), improvement and advice
0
Use Mosfet as a touch switch