How to drive 2/3 color LED's and circuit schematic

The 3 colour LED package contains 3 separate LEDs, each for one of the 3 colours.
In the device you refer to they share a common Anode (positive) connection on pin 4 and each LED's Cathode (negative) connection ON A SEPARATE PIN.

On the diagram below from the LED's datasheet I have used a red line to show the relationship between the package pin and the schematic for the common Anode (+ve) connection and green lines for the 3 separate Cathode(-ve) connections.

The 2 colour LED contains 2 separate LEDs - connection as per datasheet.

To drive a 3 colour LED with common Anode you need 3 of the (slightly modified) circuits that you have shown - one per LED. The circuit needs to be modified because you have the current controlling resistor in the Anode connection - but as this is common to all 3 LEDs and you need one resistor per LED, connect Anode to +5V and place a resistor between the each LED Cathode and its related DTC113KZA driver. 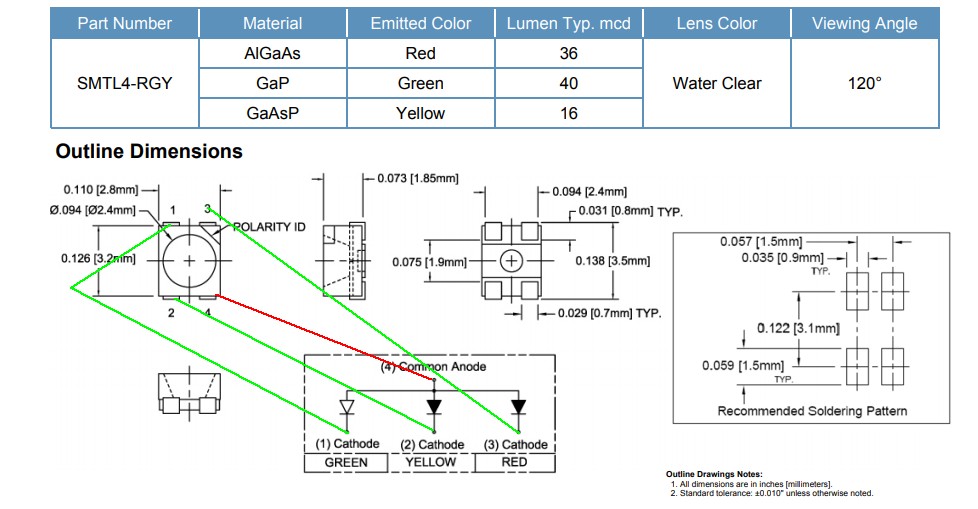 Note that the driver DTC113KZA has a 100 mA max load and a low current gain by most standards of only 33 minimum. (Max or typ not stated). It is OK for this application but would be poor for many output drive tasks.

Not the answer you're looking for? Browse other questions tagged led pic circuit-design schematics or ask your own question.

0
LED module on Arduino - driver needed?
0
SMD LED Perimeter Lighting with PWM for Dimming on each colour
2
how to get the RGB value of a color using phototransistor or photodiode?
1
How to drive luxeon Rebel LED
0
Mixing 2v and 3V LED's and calculating resistors
0
Toggle bi-colour LED
1
Wiring 3 led lights to a timer switch
5
Bi-colour LED resistor value