Full wave rectification with only an antenna input?

I am designing a receiving circuit and would like to do a full wave rectification of a sine wave signal received from an antenna. My problem is figuring out how to isolate the two ground signals of the rectifier. When the grounds are shared the rectifier works as just a single diode. Here is a schematic of my question: 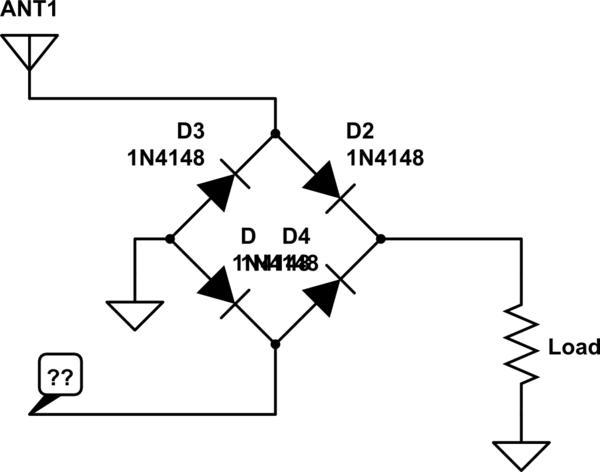 I believe that I can use a transformer with the antenna current through one winding and the rectifier on the output of the other winding but I would like to know if there are other options? Could I use an optocoupler for this? And is it possible to use an op amp with the ground of the amplifier as the input into the ?? node of the rectifier? Thanks for any help!

The antenna symbol used is that of a Marconi style antenna - an isolated wire in an RF-field. Another name: monopole antenna. It generates an RF signal at one end with respect to ground (earth). It is often an odd # of quarter-wavelengths long. Earth is a required part of this antenna, and the earth connection should have a low RF impedance, ideally lower than the 40-ohm impedance of the quarter-wavelength monopole. Sometimes a quarter-wavelength wire substitutes for an earth connection (but now you've lost half your signal).
As suggested, a transformer would be an appropriate solution.

A loop style of antenna is a self-contained antenna that can work properly with a diode-type rectifier: the DC voltage will appear across the load resistor, since loops generally have a very low DC resistance (much lower than the load resistor). A loop antenna can be multi-turn, self-resonant at a desired frequency.

Recognize that the diodes of the bridge rectifier need an input RF voltage high enough to overcome forward voltage (for silicon: about 0.6V, for Schottky: about 0.3V). For a bridge rectifier, two diodes require double RF voltage...a single diode rectifier may yield more voltage across the load resistor rather than a 4-diode rectifier for small RF signals. A very big antenna signal is required for this direct RF detector.

If you persist:
Since only large RF voltages are efficiently rectified by the bridge, some effort to match antenna impedance to a large-value load resistor makes the rectifier more efficient. For example, a quarter-wavelength monopole antenna might have an equivalent source resistance of 40 ohms: a 1:5 turns-ratio step-up transformer would efficiently match to a 1000 ohm Rload. This assumes that the earth ground is a good one, with low RF impedance.

An op amp can amplify the DC voltage across the load resistor. Most op amps haven't the bandwidth to amplify RF signals above 100 kHz. Local ground would be connected to the opamp's DC supply.

The diode within an optocoupler requires even more RF voltage than silicon diodes, and is not optimized for high frequency (RF) use.

Not the answer you're looking for? Browse other questions tagged antenna rectifier isolation or ask your own question.