I have a device which doesn't turn on normally when you press the power button like it did before. You have to keep holding it down for it to remain on. As soon as you let go, it turns back off.

In troubleshooting so far I've ruled out some of the simpler things like power supply issues, button seating/placement, loose connectors, etc.

My device happens to be an Alesis DMLite drum machine, but I'm hoping this will have broader applications than just my specific situation. I've seen this happen with other devices before. I know this site isn't supposed to be about consumer electronics but I want to make this relevant by trying to learn more about how this circuit actually works.

So the buttons seem to be pretty simple. They are basically just pieces of rubber seated ontop of a few pads on the PCB.

Here is a picture of the front panel: 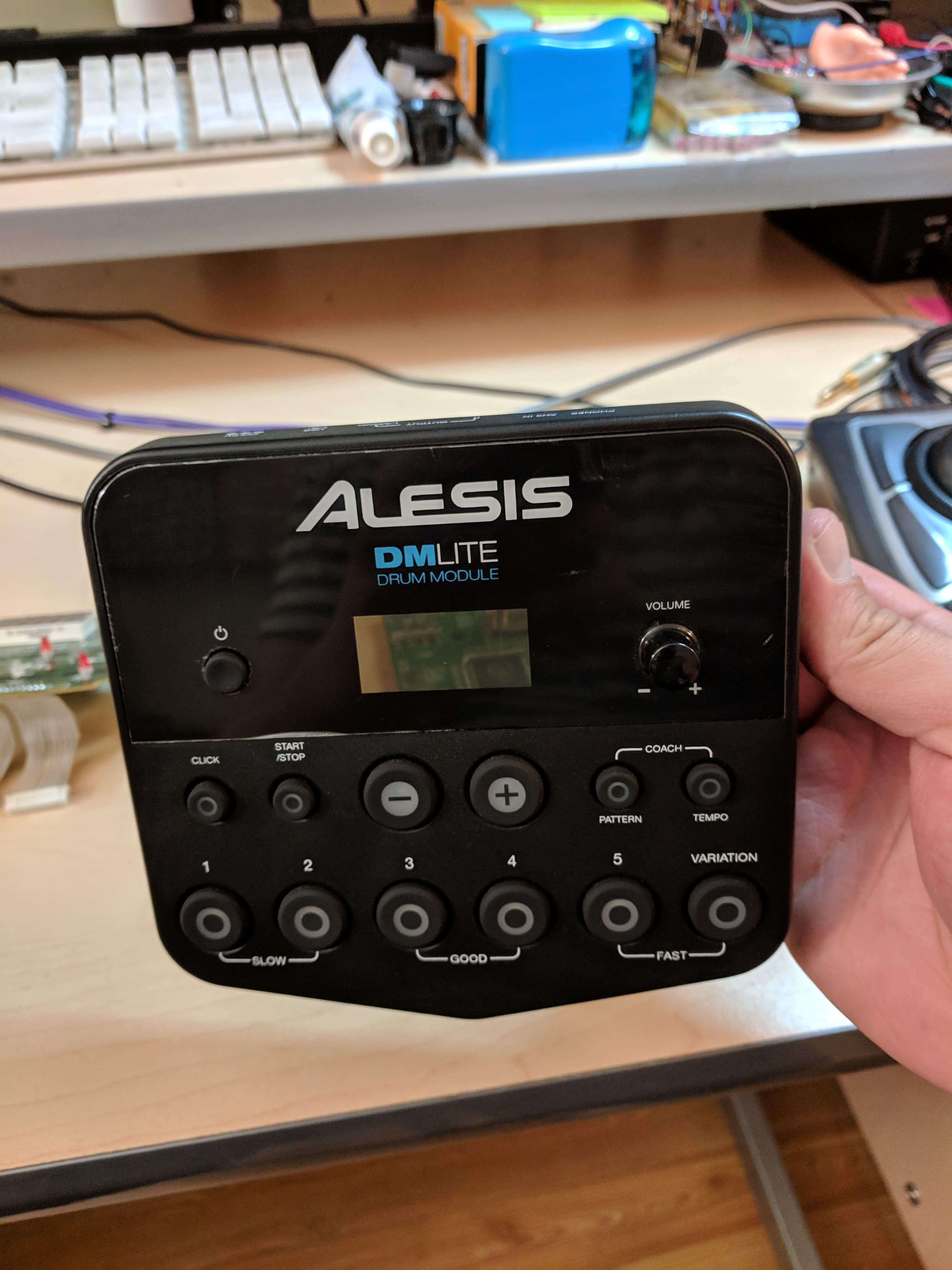 And the back of the buttons: 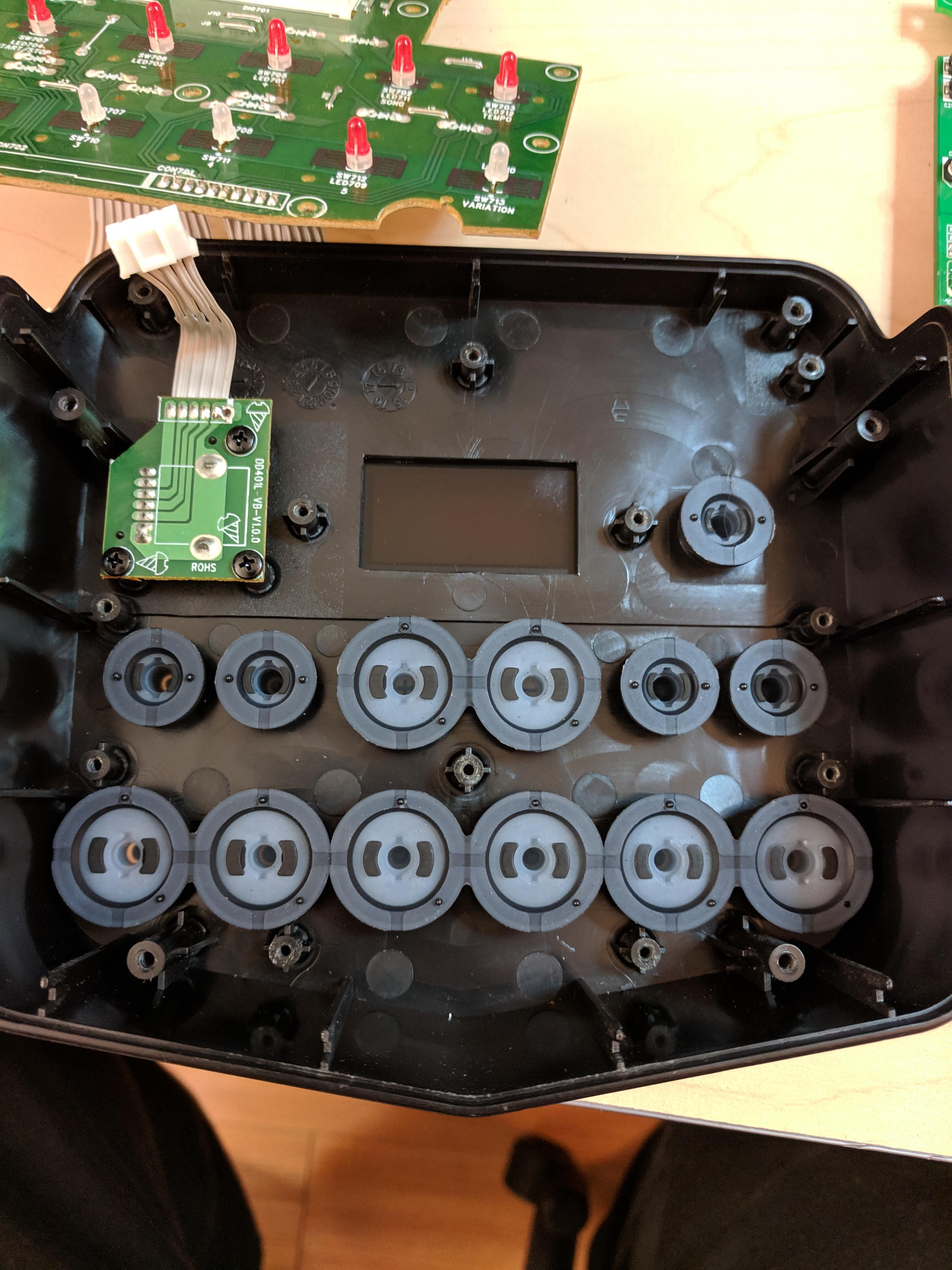 And some pictures of the boards (first one is where the buttons connect): 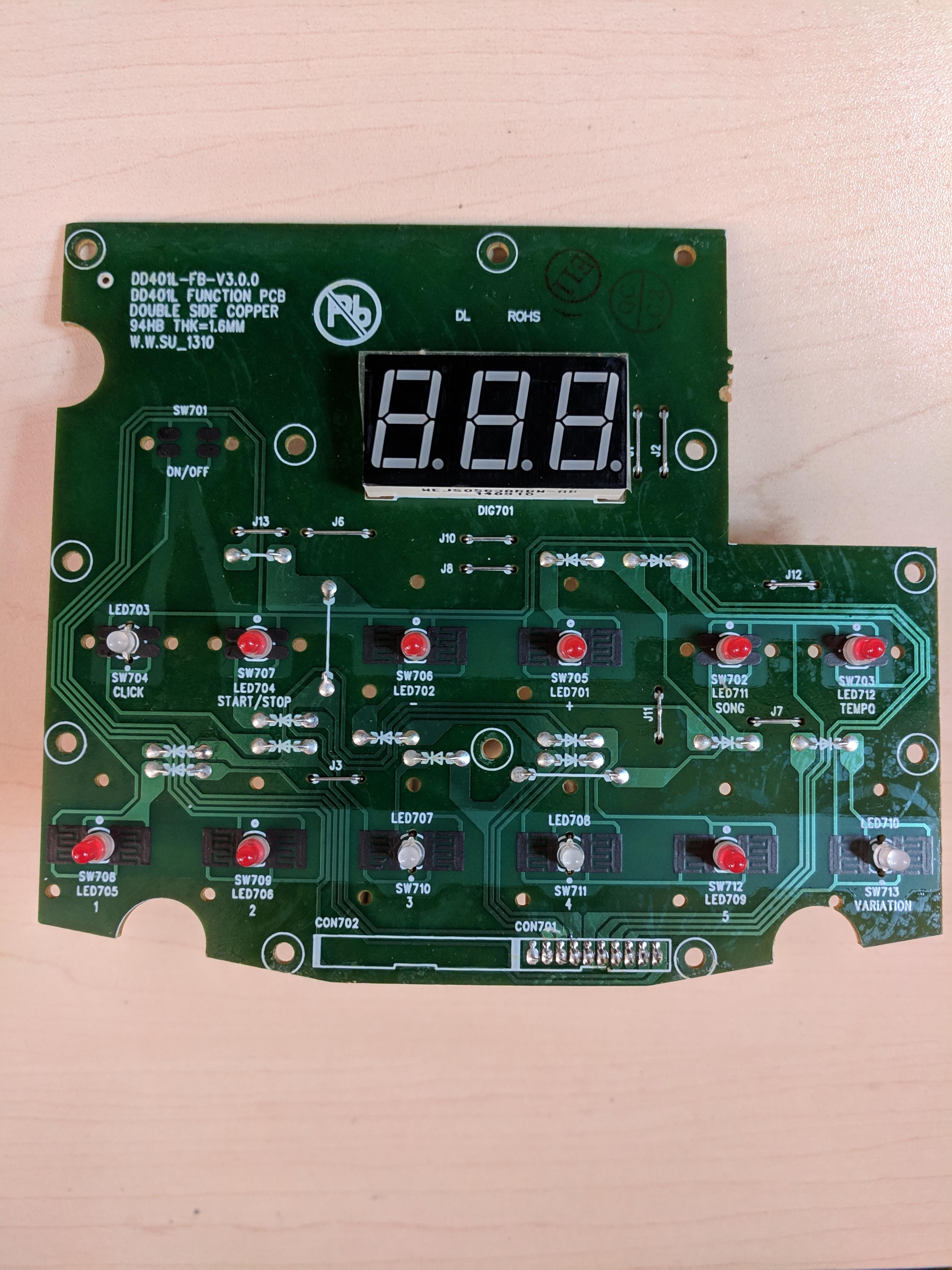 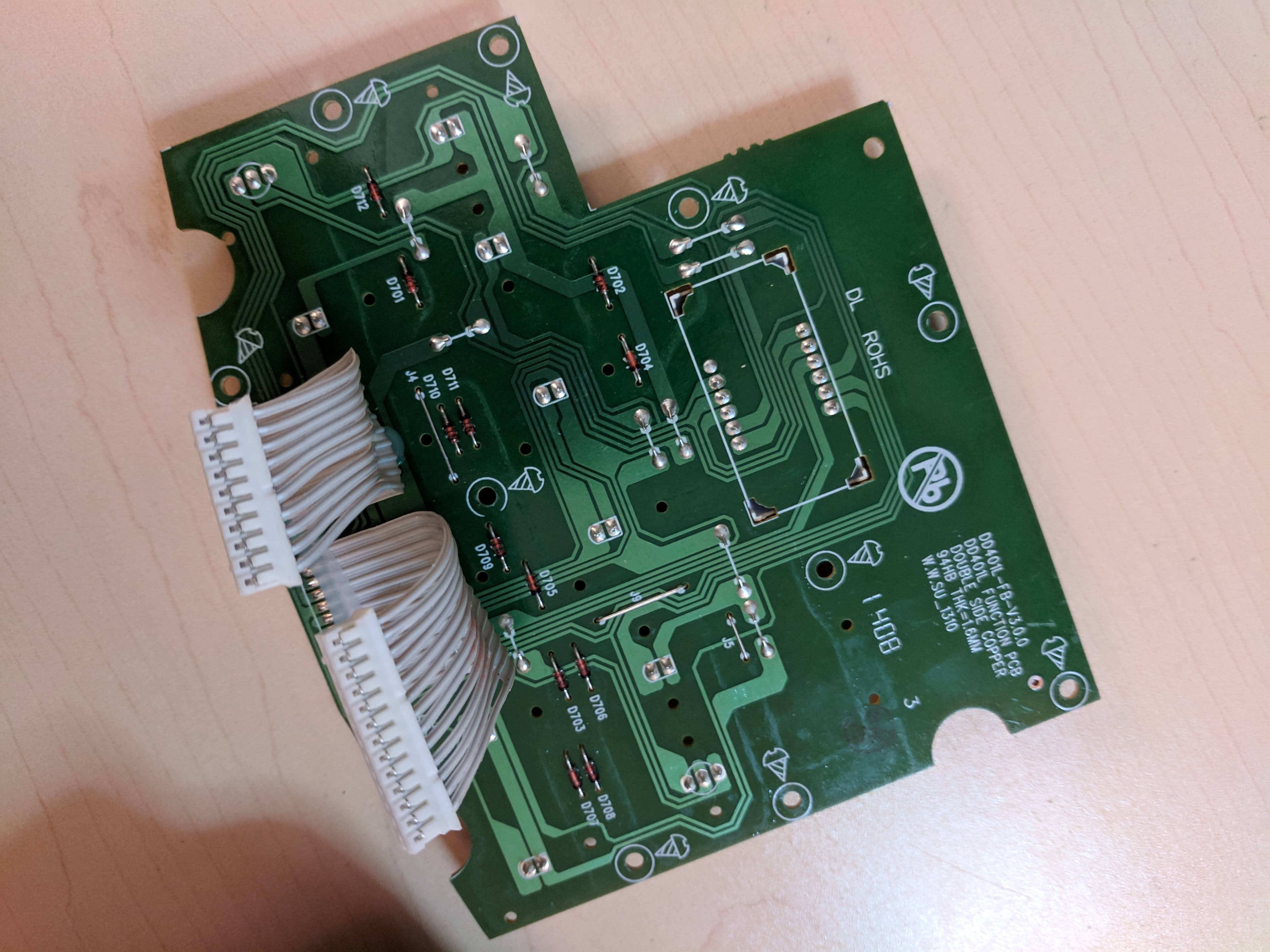 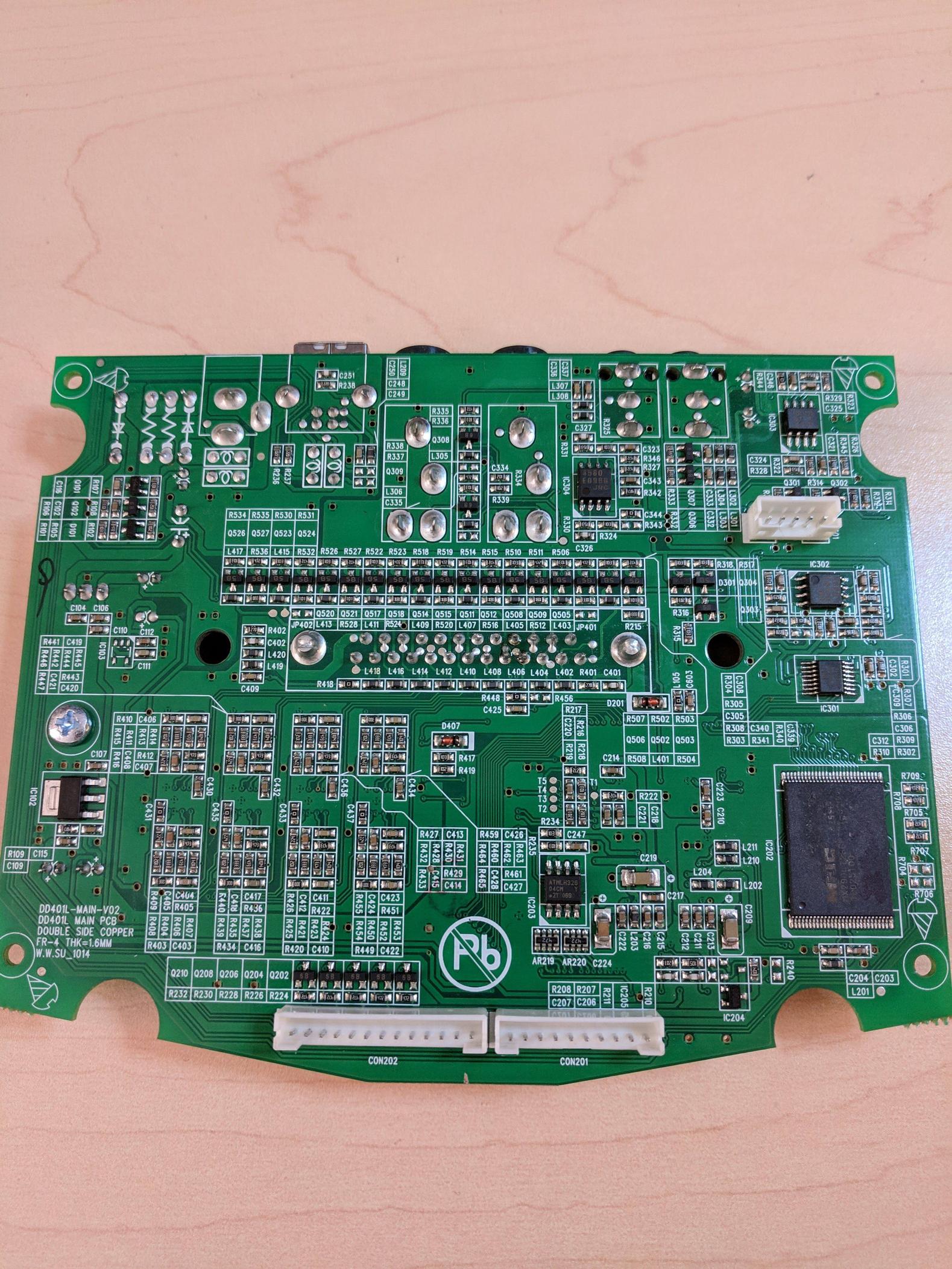 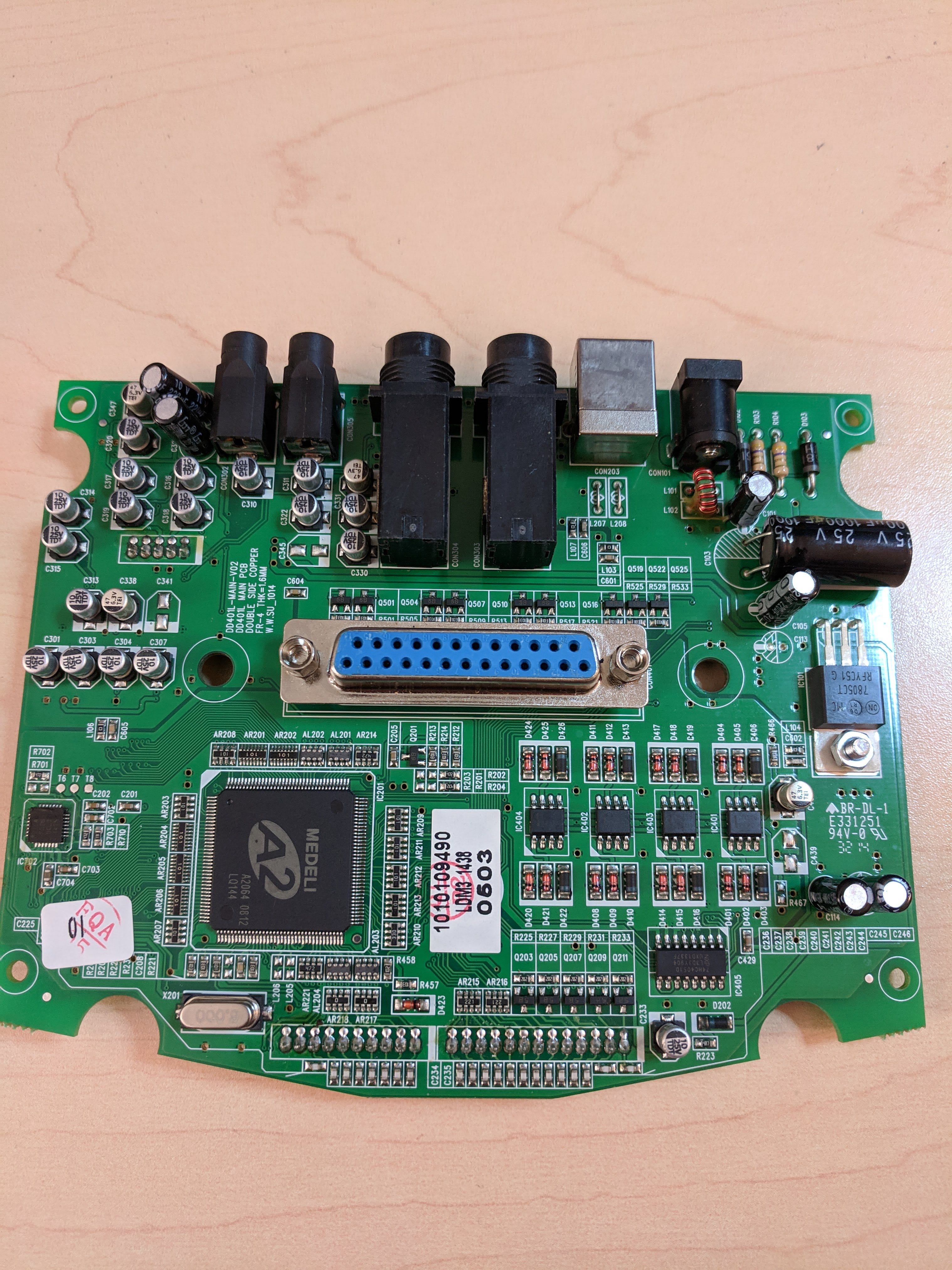 I followed the traces for the power button and one of them ended up connecting to R103, and R104 (both on lower terminal shown in the picture): 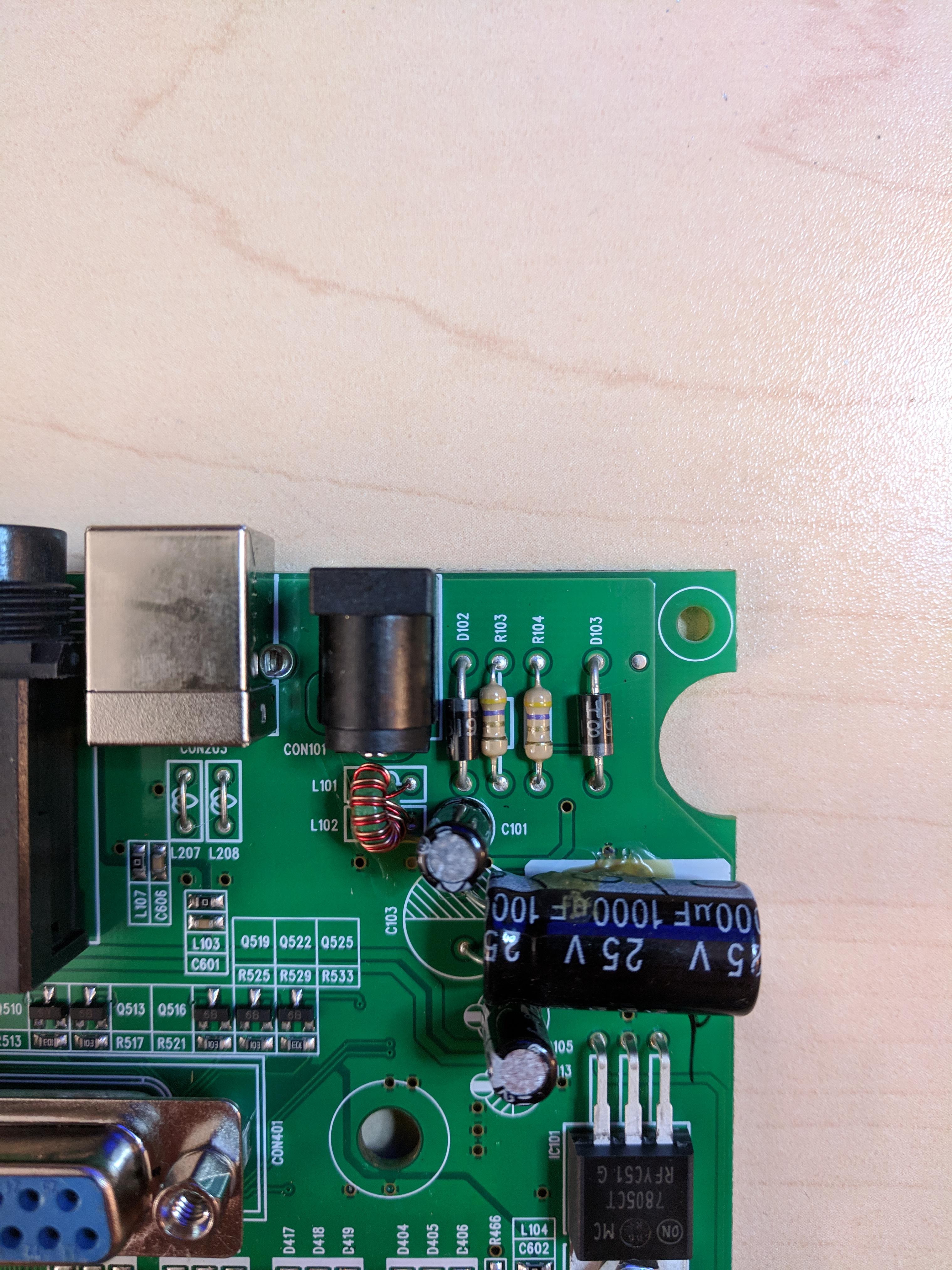 It's hard to find where the other end of the switch connects since the traces/vias aren't visible the whole way through. I was poking around with a continuity meter but haven't been able to find where it goes. But neither trace connects to ground.

On the back of that PCB it's a bit easier to trace the signal. Haven't been able to find a datasheet for the SOTs. 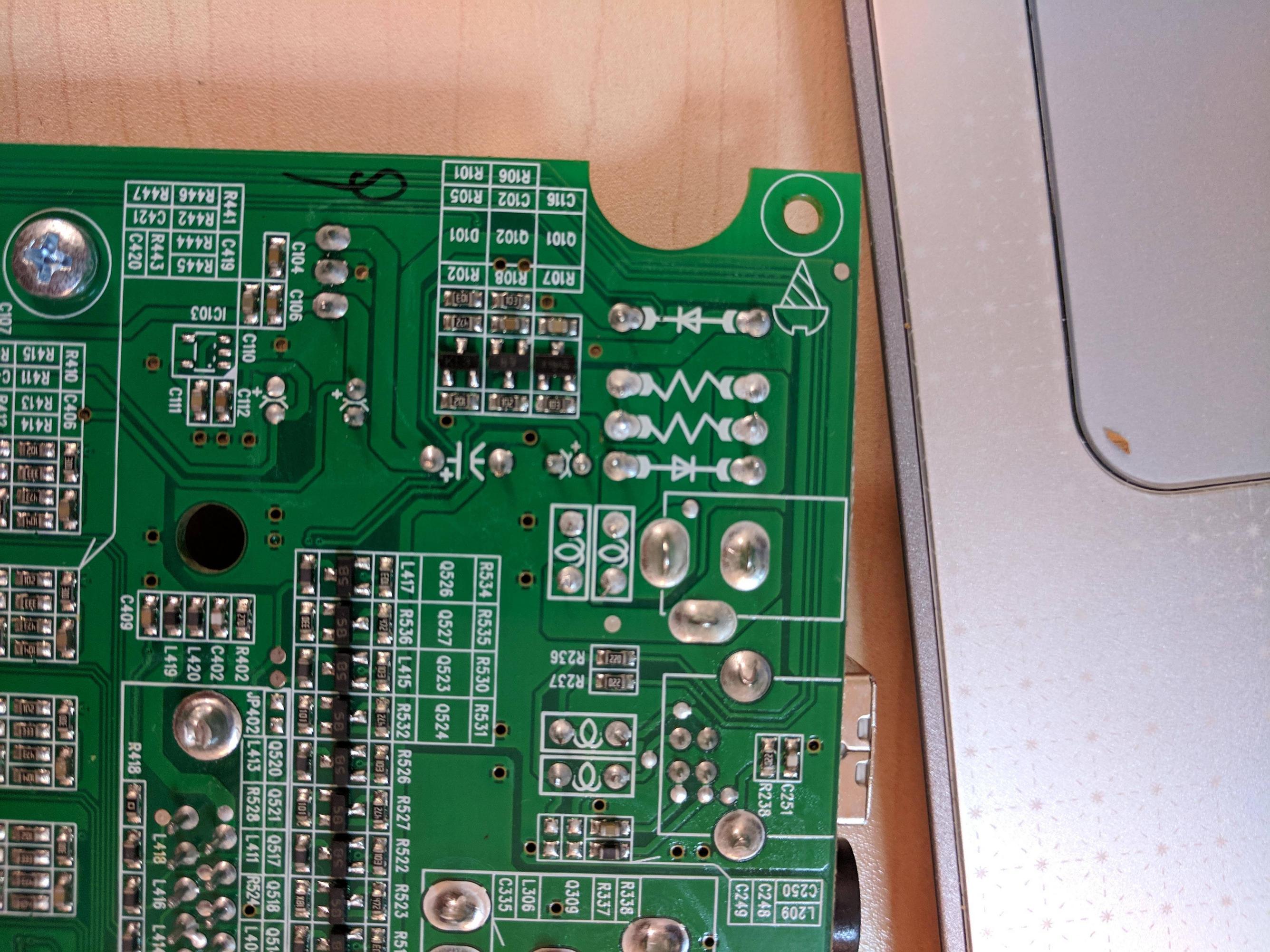 So this is what I've been able to trace out so far (lots of guesses esp. on pinout here). I've tried to put in some values based on rough in circuit measurements. 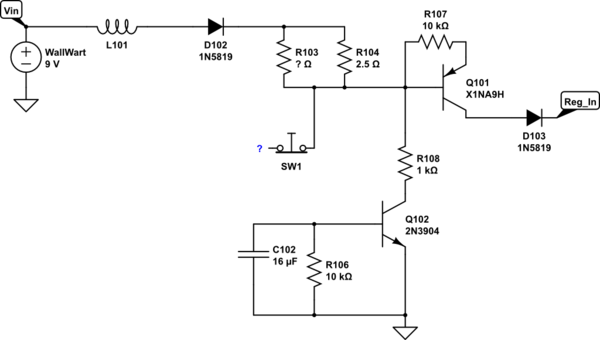 I'm curious if this resembles a common circuit that one of you may recognize. I'm not familiar with this method of switching power. Can anyone shed some light on what this circuit might be doing and how it might malfunction and exhibit these symptoms?

I suspect the circuit is not exactly like you have drawn (not surprising, due to the difficulty reverse-engineering the PCB). I suspect Q101 might be a PNP transistor to switch the supply to the regulator, and both the push switch and an MCU output signal can drive Q102 base, to pull Q101 base low and switch it on.

On some systems with an MCU (like your drum machine), the push-button only applies power as long as it is pressed. Assuming the MCU starts quickly e.g. 10s or 100s of ms, one of the first things the MCU does is to output a signal to keep the device powered on, even when you release the push button. (There are alternative techniques for when the MCU takes longer to boot, than the time you want the user to keep the button depressed.)

This "soft power switch" approach also allows the MCU to power itself off (e.g. if it detects battery low, or needs to save power, or any similar feature). You can probably see where I'm going:

The problem is that any MCU-related malfunction can cause that type of behaviour, since the MCU must be operating normally for its code to run and set the signal to keep its own power switched on. Any hardware or software problem that causes the MCU not to run its code (e.g. failed firmware update, clock problem, reset problem - basically anything wrong) means that the MCU doesn't keep its own power switched on.

To test for this theory - does the device keep running correctly if you press and hold the "soft power" button? If no, then this hypothesis could certainly be true. If yes, then this hypothesis could still be true, but the range of possible faults are much smaller, if the MCU is basically running OK while you keep the button pressed. This might be pointing more towards a problem in the "soft power switch" circuitry instead.

A proper diagnosis (especially remote diagnosis) would probably need a schematic, although the test above (and using a scope to look for signs of MCU life, as well as more reverse engineering of the "soft power switch") might allow you to make some progress. IC102 on the bottom of the PCB might also be a regulator or other power device, and might therefore be worth investigating.

Not the answer you're looking for? Browse other questions tagged power switching button reverse-engineering troubleshooting or ask your own question.

1
Replacement IC for the touch-button QT1081?
4
How does this button work without any circuit closing device?
20
What's the purpose of traces that are later punched out?
15
Studying the PCB of a 70s calculator. What were they thinking?
0
can't press two buttons simultaneously on infrared sauna curcuitboard
1
Latching Press-on / hold-off toggle switch circuit. Works on breadboard not on PCB
1
LED Circuit design (4 switches, 1 potentiometer)
1
Illuminated LED and push-button using only 2 wires