The 12.3V rail supplies a 3A 4V SMPS, which sometimes sees large load fluctuations from almost 0A through to 2A instantaneously, and back again.

During the load fluctuations, the 12.3V rail can see a voltage drop between 100mV - 600mV depending on load, along with switching noise from the SMPS.

Originally, for a separate 5V supply I was just running a linear regulator straight off the 12.3V rail, for around 40mA @ 5V. Although some amount of high frequency switching noise was getting through the regulator and onto the 5V rail.

I decided to add a low pass LC filter, between the 12.3V rail and the linear regulator. That did an excellent job, and almost completely removed the switching noise, and slowed the dV/dt during the load transients sufficiently that the linear regulator could still provide a stable 5V. The transients were still detectable, although were reduced almost into the noise floor.

The problem is that I need to draw power from the 'filtered' ~12V rail to power a 12V sensor. The sensor has non-polarity variable current output and will be at the end of an 75m+ cable.

If I connected the 12V sensor directly to the 'filtered' ~12V power rail, then the 100mV - 600mV voltage drop occurs, surely would it not propagate in a wave down the length of the cable? and might (should?) affect the stability of the current output of the sensor, and any derived readings.

I'm struggling to determine the best approach to achieve a stable 'filtered' ~12V rail, from the 'unfiltered' 12.3V rail.

I've simulated a number of low pass topologies, and then build up the circuits, although I've been struggling to get the simulations to match the real world filters.

My (self imposed) constraints are to stick with ceramic capacitors (lifetime & reliability), although Tantalum caps can also be considered. I've used miniature SMD components (minimum 0603) to limit loop area and emissions.

The 'filtered' rail needs to run at a minimum of 12V, and I suppose the extra 0.3V could be dropped to achieve superior regulation if needed.

For my approximate model to simulate the 'unfiltered' 12.3V DC rail is to use a square wave with 300mV peak to peak at 12V DC offset, running at 200Hz with 90% duty cycle. Although, the load that causes the voltage drop occurs at a regular frequency, in reality it occurs after random intervals rather than continuously.

Example simulation of low pass filter for 'filtered' 12V rail, problems include large over-voltage at startup, and unstable oscillations during changing load. Despite that, during steady state ripple is less than 10mV. 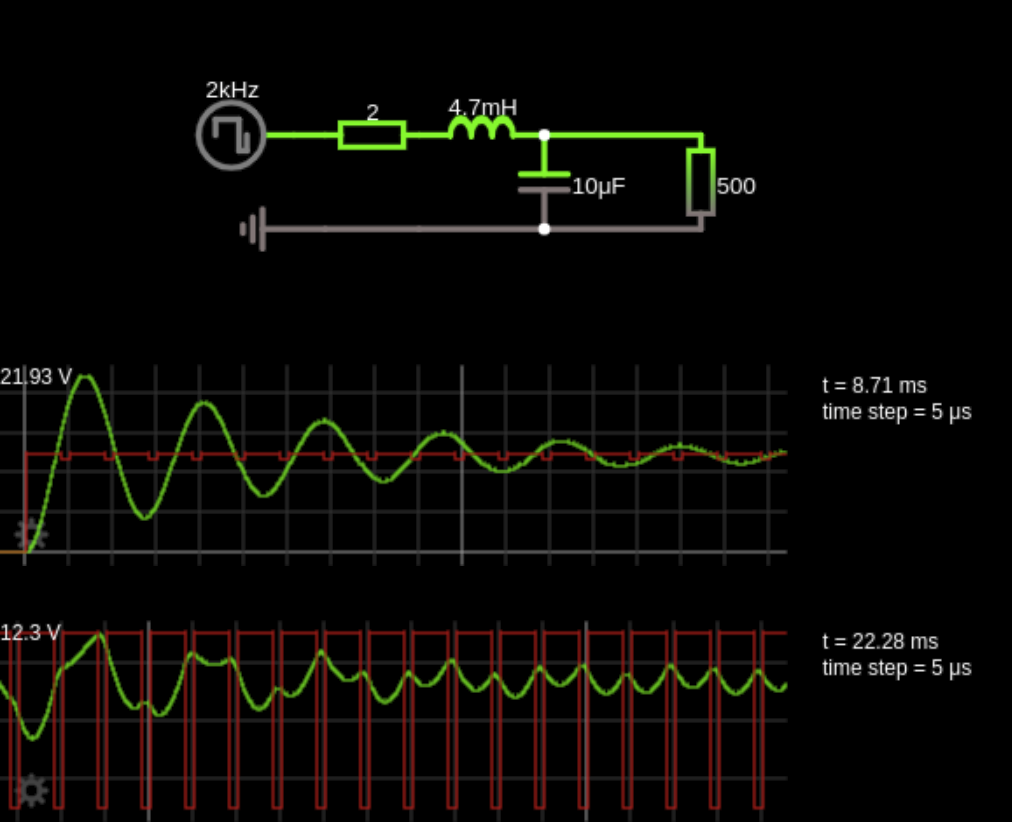 My question is are there any low pass topologies that I may not be aware of, or something that can be done to improve the existing filter?

Edit: Potentially better solution. I've come up with the following circuit, which is a two stage RLC filter, that borders slightly on the under-damped side, although at maximum load will still provide atleast 12V, while also sticking to the restriction of only using Tantalum or Ceramic caps 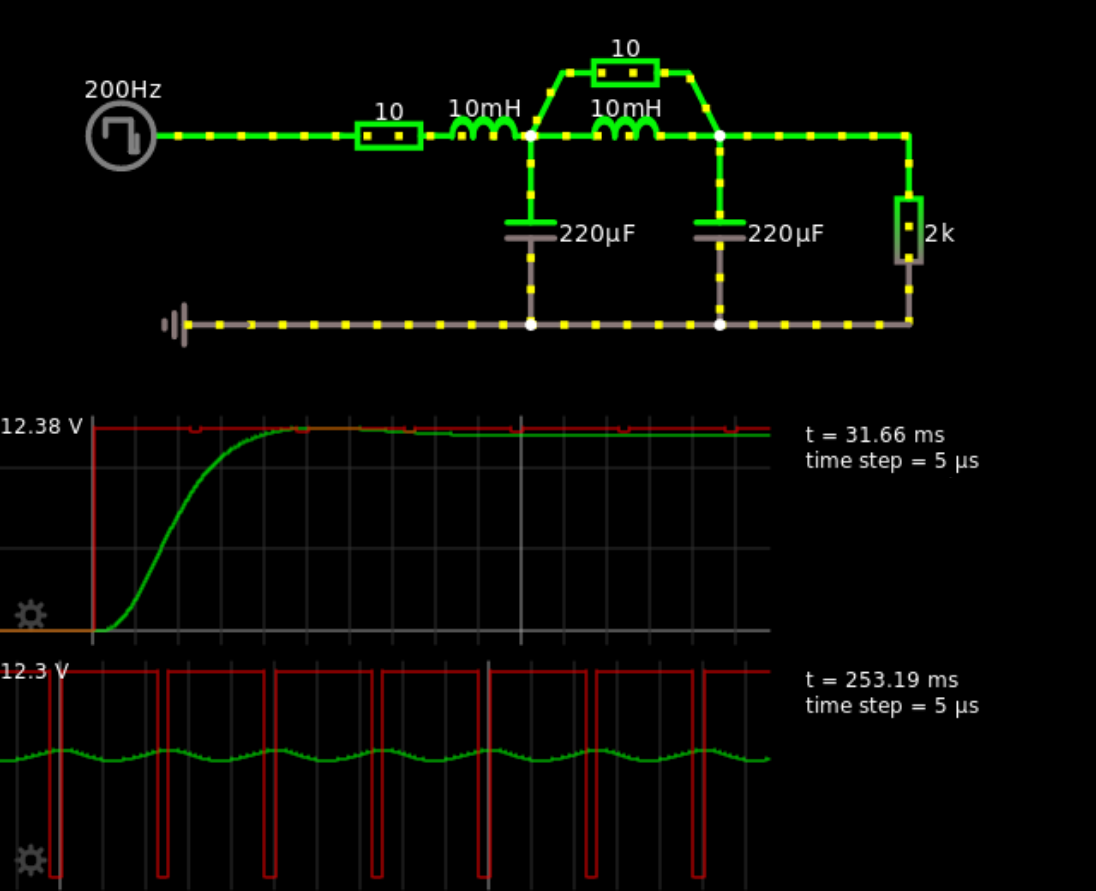 I considered that, although I only have access to the 12.3V coming in from the 220V AC transformer. I was considering a buck-boost converter, although that seemed overkill, and would also probably be expensive, add more noise on the 'unfiltered' rail, and might cause other unforeseen problems

15V AC-DC SMPS is commonly cheap nowadays, adding buck-boost would complicate even more. Depending on your current demands, for example take a look at Aliexpress here, the price can be as low as below 3 USD for 15V 2A supply. While it might be fun for you learning about the filter, I suggest that you shouldn't over-complicate yourself, I don't know if you have cost or time limits in your project.

Does the 4V (or 5V?) supply that you have can handle 15V input voltage? If it does, then you can use the 15V SMPS, put a filter between before the second stage supply and then parallel it with LM7812.

I don't know that in the end you'll be using SMPS or linear regulator for the +5V rail.

It's all is depends on your needs.

Not the answer you're looking for? Browse other questions tagged power low-pass passive-filter or ask your own question.