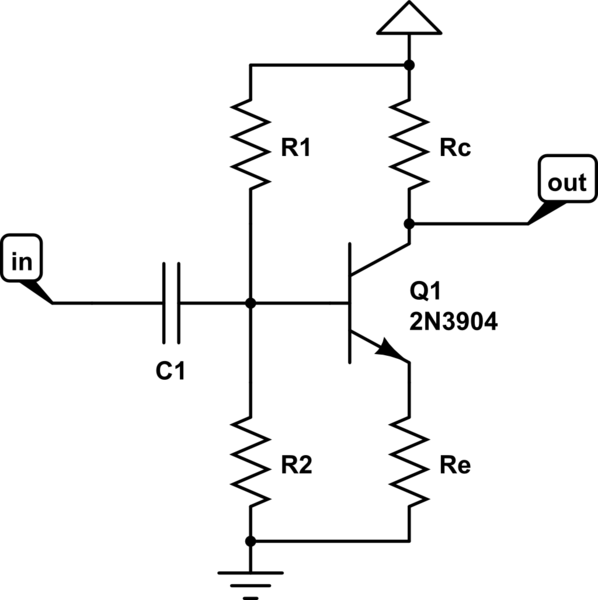 I know that out is \$k\cdot\mathrm{in}\$. What I'm struggling with is to understand intuitively what all those resistance are making. Everytime I think about it, everything seems too intricate and coupled.

What I'm asking is an intuitive explanation of how to solve this circuit, but it is maybe a bad question for StackExchange, I'm not sure.

EDIT: I'm using the ground symbol from CircuitLab for +5 because I didn't find any better suited symbol.

As I'm sure you already know, the voltages for the base and the emitter of an active mode BJT are close to each other -- usually somewhere between about \$600\:\text{mV}\$ and \$900\:\text{mV}\$ (though rare cases will see a little more or a little less.)

One way to visualize this fact is that the emitter "follows" the base. So if a signal is applied to the base causing it to go upward a little bit, then the emitter will follow it upward, too, with only slight variations in the difference between the base and emitter. (Those slight variations are substantially smaller than the signal magnitude and are due to changes in the collector/emitter current.)

This is important for this BJT configuration because the current gain of a BJT means that in exchange for a small amount of current taken from the source signal at the base, the emitter is able to source \$\beta+1\$ times as much current (which is a lot more.) (Of course, that current has to come from the collector and the collector must be attached in some fashion that will allow it to provide that current.) So if you hook up a resistor from the emitter to ground and if you can do this in such a way that the emitter can move (it isn't "nailed" to ground, for example, but instead has a resistor there), then the emitter moving up and down with the signal will cause the emitter current to vary with the signal at the base.

The above leaves us with a problem. We have the possibility of varying the emitter current (and therefore also the collector current which is almost the same magnitude as the emitter's current.) But with only one power supply voltage available, the BJT needs to be centered somewhere above ground so that the emitter isn't sitting at ground.

Since the base is going to be about one diode drop above the emitter, and since we want the default voltage at the emitter to be "somewhere" above ground, we need a way to position the base voltage above ground but also below the power supply voltage.

You probably already know about an easy way (cheap, too) to create a new voltage source -- use a resistor divider. So that's what's used. The pair of base resistors forms a Thevenin equivalent voltage and Thevenin source resistance.

The resistor divider allows you to construct a new and useful Thevenin voltage rail out of the main power supply voltage rail: 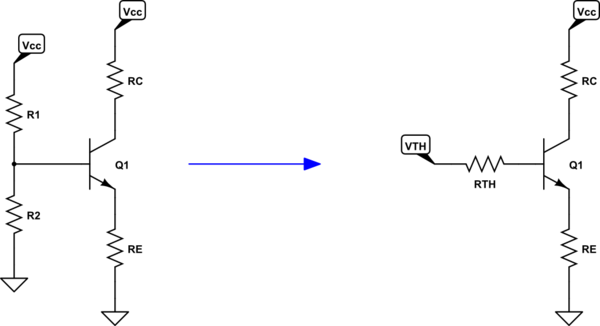 A resistor divider is very convenient and very cheap and with today's precision resistors it's also pretty accurate, as well. But like everything, this sword has two edges and it cuts two ways. You can create a stiff resistor divider that for all practical purposes isn't affected at all by the required base current in the BJT. So it's quite predictable, independent of the BJT itself. But this also means that the source signal "sees" a very low impedance and this usually means that the voltage swing of the signal is greatly reduced. (The signal source has it's own source impedance and together with the biasing resistor pair it soaks up most of the signal before it gets to the BJT's base.) You can also create the opposite by greatly increasing the magnitudes of the resistor divider used for biasing the BJT, but then variations in the BJT's \$\beta\$ (which affect the actual base current required) significantly affect the resistor divider's voltage to the base because of the base current flowing through \$R_\text{TH}\$ and causing a significant voltage drop across it that isn't the same for any two BJTs or one BJT at different temperatures or operating currents.

So a balancing compromise is required. How that balance is actually struck may depend somewhat upon what's driving the circuit. But because of general knowledge about BJT variations and recognizing that getting 90% of where you need to go is "good enough" and that struggling to get to 99% costs too much in terms of loading down the signal source for the small benefit gained, most designers will arrange things for the ballpark where the current flowing from the power supply rail to ground, through the resistor divider pair, is about 10% of the current planned for the emitter/collector side.

Yes, it means the BJT does impact the exact voltage of the base so any two circuits will be somewhat different in their exact operating point. Yes, it means that the incredible precision of today's resistors is partially wasted. (But at least they don't add yet another error.) But it allows a "weak" signal source to be applied without losing too much of the source signal voltage swings and it manages the situation well enough to be of practical use when making dozens or hundreds of the same circuit. They will all be close enough to each other in operation to be useful for many applications.

What About the Collector??

Okay. So nothing above really said much about the collector. So let's bring that part in, now.

I haven't discussed yet what might be a good base or emitter voltage to choose. And that choice may be important (like everything, context matters so while it may be important it isn't always important -- particularly if there is global negative feedback in play to self-correct the circuit.)

To take into account the impact of part variations and ambient operating temperature differences, it's a good idea to make sure that the default emitter voltage (called the quiescent emitter voltage) is many times the default thermal voltage (which varies directly with temperature.) Since the thermal voltage at room temperature is about \$26\:\text{mV}\$, this means you want to have about \$1-2\:\text{V}\$ above ground at the emitter. If you are in tight circumstances (low power supply voltage), you'll compromise and accept a smaller figure. If you have a much larger supply voltage, you might go higher still.

There's another aspect. If the emitter voltage is closer to ground, then so is the base voltage. And this means that one of the two divider resistors at the base has to be a lot smaller than the other one. This lowers the Thevenin resistance "seen" by the signal source and that reduces the amplitude of the source signal by the time it reaches the BJT base. So "jacking the base" voltage up nearer the midpoint helps maximize that Thevenin resistance and therefore keeps more of the source signal.

In general, you probably have a voltage gain you want to achieve and some understanding of what's going to be driving the circuit and what the circuit itself will be driving, as well. These are inputs to the design process and are necessary. And if the amplifier is just one stage of many, it's likely there are global negative feedback paths involved, too. So everything in context, as usual.

Hopefully, the above provides some qualitative understanding of what's going on, which is what I think you were asking for.

Temperature affects the base-emitter voltage and it affects \$\beta\$. Those impact the DC operating point. But for AC gain purposes, temperature also affects the differential equation of the Schockley equation and the value of \$r_e=\frac{V_\text{T}}{I_\text{C}}\$. (\$V_\text{T}\approx 26\:\text{mV}\$ at room temp.) You can visualize \$r_e\$ as a tiny resistor at the tip of the emitter (for AC signal purposes.) You will want \$R_\text{E}\gg r_e\$ to minimize thermal effects. Another way to say this is that you want to set the emitter's quiescent (default DC operating point) voltage to one volt or more.

You also do not want to allow the collector voltage to get any closer to the emitter voltage, throughout the entire AC cycle, than about \$2\:\text{V}\$ to avoid saturation, minimize the Early Effect, and gain changes over the AC cycle. You can get away with less, but you should prefer even more, if possible.

Without knowing the input source signal size or the input source impedance and without knowing the output's input source impedance, it's hard to do a real design. But let's say that the input has a "low source impedance" that we can ignore and let's say that the output has a "high output impedance" that we can ignore, too. All we want to do is to simulate something that appears to work okay and provides a voltage gain when assuming that the input can drive anything and the output doesn't load down the result, at all. (Keep it simple.) Finally, assume you have \$V_\text{CC}=9\:\text{V}\$ (a simple battery.) Let's leave the final gain open to "whatever happens," for now. (It's often a goal, but your circuit doesn't include an AC-gain emitter leg which provides more freedom there.)

In a more perfect world, I might reserve a quiescent \$V_\text{E}=2\:\text{V}\$ and a minimum \$V_\text{CE}=4\:\text{V}\$. But this wouldn't leave much for the output signal swing. So I'll compromise and use a quiescent \$V_\text{E}=1\:\text{V}\$ and a minimum \$V_\text{CE}=2\:\text{V}\$. This leaves about \$6\:\text{V}\$ for the worst case AC swing at the collector output. In actual practice though, to get the full swing this would have to mean that the collector current would reach close to zero and that is always bad because of how big \$r_e\$ gets, then. So I'd reserve about \$2\:\text{V}\$ as a top margin, as well. (There are equations I could develop to show you the variation of gain vs this margin, but I'll hold short of that unless you ask.)

(Stop and take note. You are pretty much stuck with the AC voltage gain that is being determined by other considerations. You don't get to pick it (well, you can, but then you are making other sacrifices by not being able to control those choices.) This is a serious problem with this simple design. If you want to avoid thermal changes from significantly affecting the gain and avoid having a signal-swing dependent gain (distortion), then the gain can only be controlled by increasing/decreasing \$V_\text{CC}\$. The use of an AC-gain setting emitter leg helps fix this by providing a way to set the DC operating point separate from the AC gain choice. This is a reason your topology, simple as it is, isn't so commonly found. It's used. But its limitations push away from its use.)

The final circuit is then: 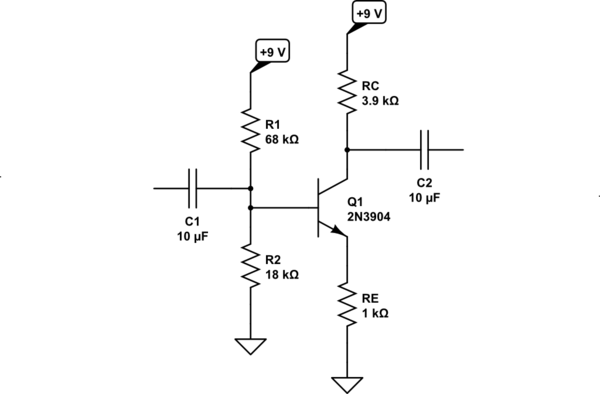 Throw away Rc. As long as the transistor has 1volt across vce, you can view the entire circuit as voltage-controlled current source, with DC and AC variations of the current.

Knowing the currents out of the collector, we can insert a Rc to convert these currents, both fixed and changing, back into voltages. Knowing VoutAC and VinAC, we compute the stage voltage gain.

If you want gains higher than 1, I suggest this 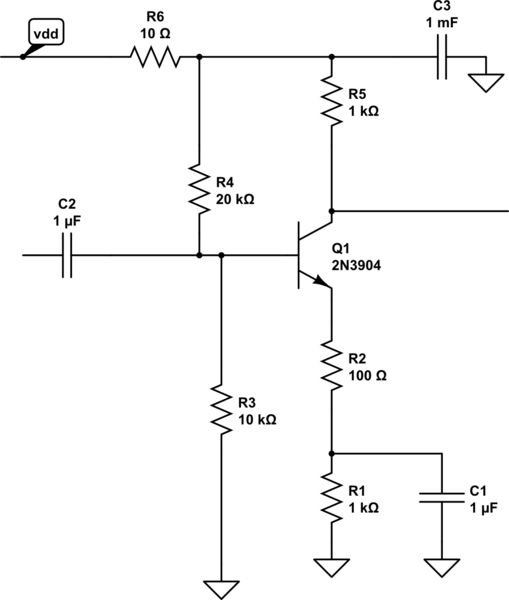 Not the answer you're looking for? Browse other questions tagged amplifier bjt common-emitter or ask your own question.

3
How is possible that with same Ibase there is more than one Vce?
1
BJT Input AC Signal Amplitude
1
2N2222 transistor datasheet saturation current