Purpose of level-shifter with same in and out voltages

I am looking at a schematic for the Pixhawk 2 board (page 3).

The UART ports on the microcontroller are sent through a level-shifter chip (TXS0108) where the input voltage is the same as the output voltage. What benefit does this provide? 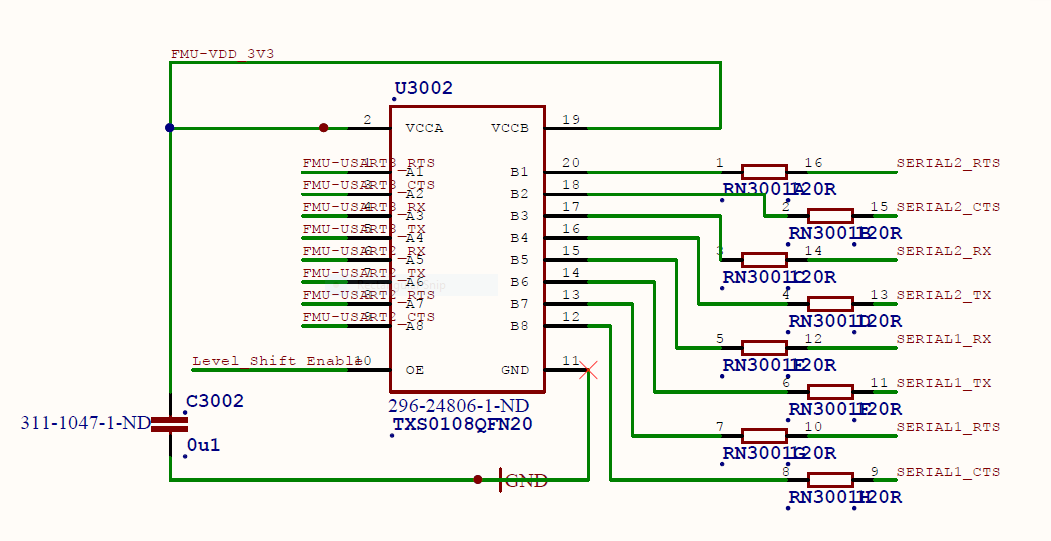 The level shifter is used not only to "shift" the logic levels of a signal, but also to lower the impedance of its source and increase its current drive capability in order to drive heavier loads without going out of specifications: in this case, the higher impedance output UART is sent to out the microcontroller board via the TXS0108 probably to rise its output drive capability.

On the full schematic there is an interesting note that starts:-

due to the serial lines being able to back power the cpu...

The STM32F407 MCU is only rated for an absolute maximum of 5mA injected current per pin (-5mA, +0mA on 5V tolerant pins), so if it was powered through a UART pin it could easily be damaged. The TXS0108 level shifter is rated for 50mA per input, so it is less likely to be damaged by eg. connecting an RS232 serial device (which might put out +-12V at 15mA or more).

Another reason for buffering the serial port lines could be to make the MCU more tolerant of EMI. Autopilots are often used in harsh environments with nearby rf transmitters and high power brushless motors. An EMI induced glitch that caused the MCU to freeze or go crazy could crash the drone before it had time to recover.

The only obvious thing (other than buffering) I see is that the I/O can be disabled via a control line Level_Shift Enable.

When that line is low the outputs are high-impedance, so it acts as a bidirectional tri-state buffer.

The other answers do not make sense. The output impedance of a microcontroller pin is about 30 ohms: perfectly capable of driving the 120 ohm series resistors. Also, I have not seen a microcontroller where you don't have tristate control in the chip. I suspect historical reasons: in the past it was level shift to 5V,which has evolved to levelshift to 3.3V, but to reduce impact on the layout the levelshifter was left in place.

Not the answer you're looking for? Browse other questions tagged microcontroller digital-logic level-shifting or ask your own question.