It cannot measure voltage and resistance and then take the quotient as resistance can be measured when resistor is isolated.

For analog current ranges, matched low-resistance shunts are connected in parallel with the meter movement to divert most of the current around the coil. Again for the case of a hypothetical 1 mA, 500 Ω movement on a 1 A range, the shunt resistance would be just over 0.5 Ω.

However I don't understand it.

Figure 1. The example meter has an internal resistance of 500 Ω and will read full scale with 1 mA through it.

Figure 2. R1 "shunts" most of the current around the ammeter.

The combined meter and shunt is always wired in series with the circuit being measured.

You need to connect your multimeter in series when you are measuring current. – The Photon

But this article talks of something parallel – Shlok Vaibhav

It is describing the meter being in parallel to the shunt which is in series with the circuit being measured. Hopefully this is clear now.

This is the paragraph in question:

For analog current ranges, matched low-resistance shunts are connected in parallel with the meter movement to divert most of the current around the coil. Again for the case of a hypothetical 1 mA, 500 Ω movement on a 1 A range, the shunt resistance would be just over 0.5 Ω.

They are describing the internal workings of the meter. You always connect the meter itself in series with the current you want to measure so all the current goes through the meter.

Inside the meter there will be a shunt resistor and a voltmeter, at least in the case of digital meters. Analog meters are inherently current meters, but they are made to deflect fully with a very small current, so the shunt divides the current allowing a fixed portion to go through the meter movement (except perhaps on the lowest DC current range). A typical analog multimeter, more realistically, would have a movement that would deflect fully with some tens of uA. The Sanwa meter shown has a sensitivity of 20,000\$\Omega\$/V so it is a 50uA (full scale) movement. You can also see that the lowest DC current range is 50uA full scale. 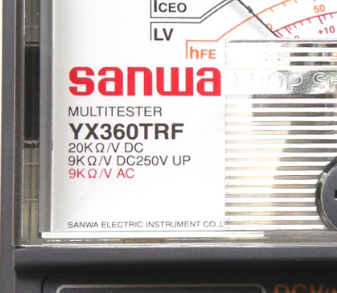 At some point you might wonder how a shunt divides current in the case where the underlying meter is a D'Arsonval moving coil movement- ideally, putting a shunt resistor in parallel would have no effect (look at the current divider equation), but real meter movements have significant internal resistance, so you would shunt the movement with a fraction of that resistance, and likely you would add some resistance on top of the copper resistance. And if that series resistance you added happened to have a slight negative temperature coefficient it might compensate for the positive temperature coefficient of the copper coil. 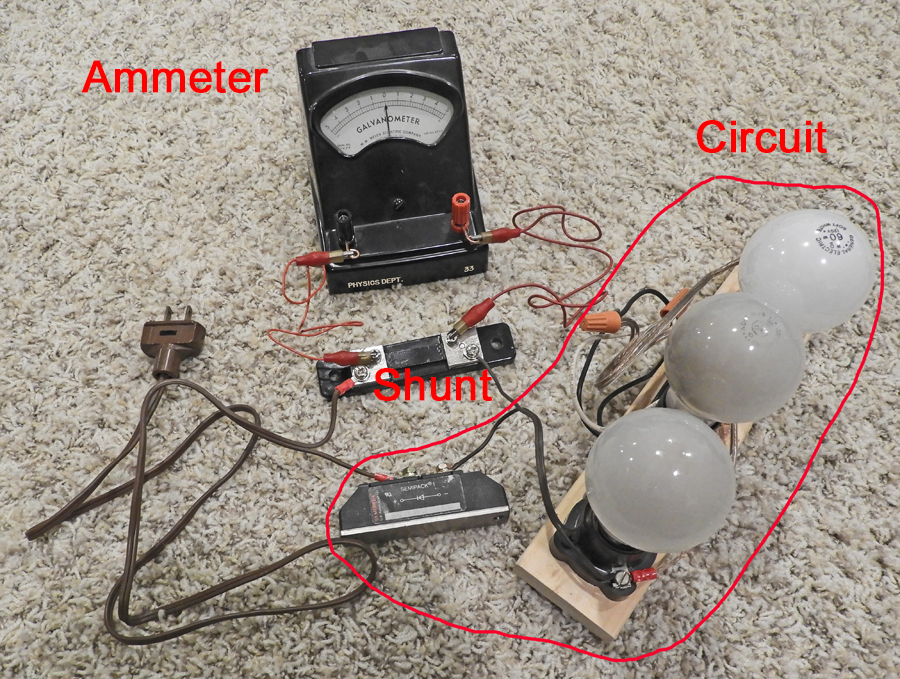 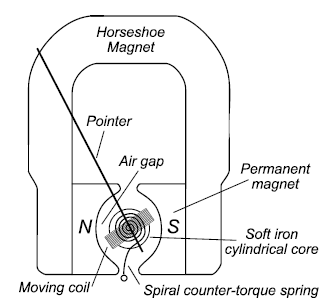 The meter movement works on the motor principal, where current is applied to a coil wrapped around an iron core between a permanent magnet. The current magnetizes the iron core and the coil rotates proportional to current applied. This current is limited by the current which causes full-scale deflection, say \$I_{FSD} = 50 \mu A\$.

A current greater than \$I_{FSD}\$ would cause the analog needle to be pinned to the mechanical stop as the needle attempts to turn to the level.

So the analog multimeter in question can measure VDC, ADC, VAC, Ω, C, ±VDC. Each setting uses different circuits to convert the scale selected to achieve the appropriate 0 to 50μA.

So an analog ammeter is connected in series, but internally the analog meter movement has to be connected in parallel because of the current which causes full-scale deflection \$I_{FSD}\$.

Not the answer you're looking for? Browse other questions tagged circuit-analysis current-measurement multimeter or ask your own question.

1
How measure the voltage over a large resistance?
0
Observing and exploring the relationship between current and potential with a USB multimeter
2
Multimeter current measurement: internal resistance or input impedance specification
9
Bad Measuring Equipment?
8
Under what conditions would using a voltmeter be more accurate than an ammeter to measure current?
0
Inconsistent results measuring current
0
Do battery shunts (e.g. 500A/50mV) lower the final voltage on the system side by 0.05V / 50mA?